First, a scheduling announcement: I will be publishing a weekly stats roundup here every Friday (except for international breaks). In this post we will look at Arsenal’s Premier League and Europa League stats, tracking how they play throughout the season and how Unai Emery is shaping his team. I will also offer some data points on the opponent for the weekend’s match if there is one.

The first thing we have to say is that there isn’t much to say. We are only two weeks in to the season and if you look at any graphic representation of the kickoff to a season, it always looks like a man having a heart attack at the start and then flattens out. The stats for Arsenal are also especially weird because they faced two of the top six teams in their first two games, lost both matches, and Unai made some rather odd tactical changes in the 2nd half against Chelsea.

To illustrate how odd those first two matches were for Arsenal statistically, last season, they were 3rd in possession with 58.5% of the ball on average. This season we are 17th with 43%. That’s a -206 pass difference between last season and this one, down from 619.1 per game to 413 per game. Emery has said that he wants to play out from the back and that he wants to retain the ball so I expect these numbers will change over the next 8 matches as we face opponents who are less likely to dominate the ball the way that Man City and Chelsea did. 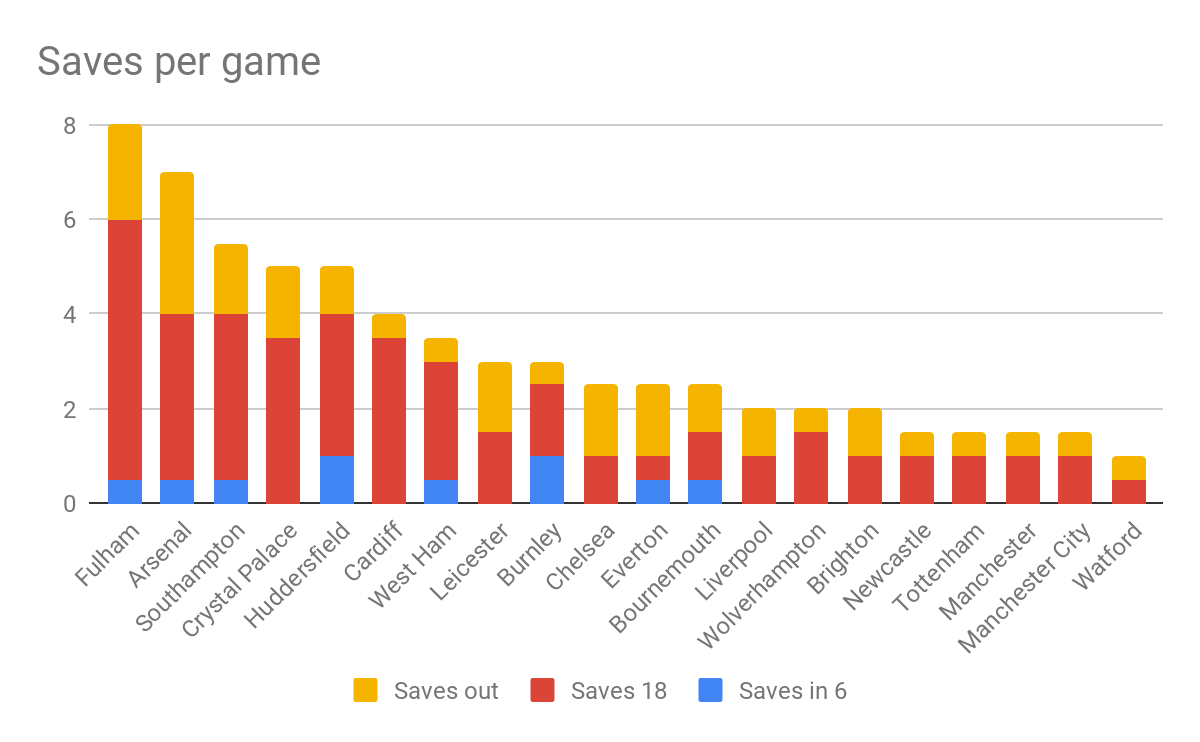 Given all of the possession that Arsenal conceded it’s not a surprise that they have allowed the and most shots in the League with 20.5 per match. The team who have allowed the most shots per game is Huddersfield, who also faced Man City and Chelsea in their first two matches of the season. Cech has made the 2nd most saves of any keeper but there is a silver lining here in that he’s saved 3.0 shots from outside the box per match. If we just count saves inside the 18 yard box, Arsenal drop to 4th. Still not great and signs of a lot of work to be done.

Defensively, we also don’t know how Emery is going to have Arsenal playing because they have been sort of all over the place in these first two matches: playing against the League champs in one match and against one of the most expensive teams in the second match has skewed the numbers a bit. Arsenal were middle of the pack in terms of tackles (literally, 10th): 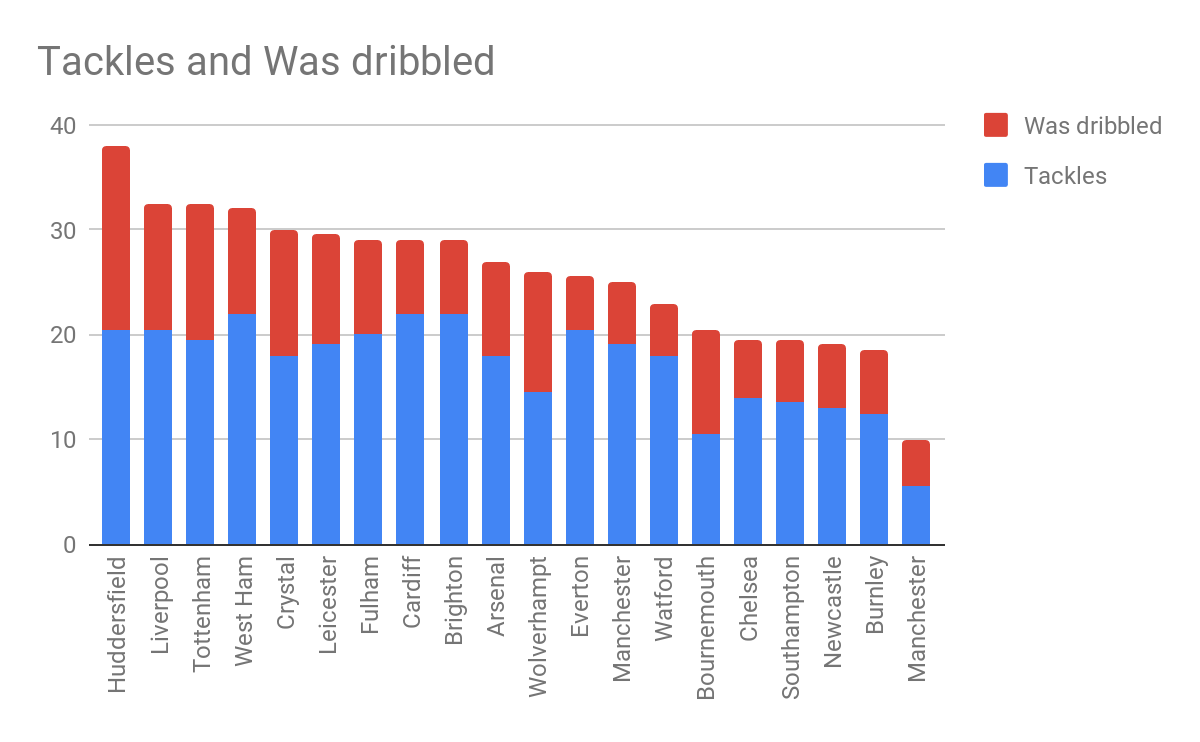 And Arsenal are middle of the pack when it comes to interceptions and blocked passes: 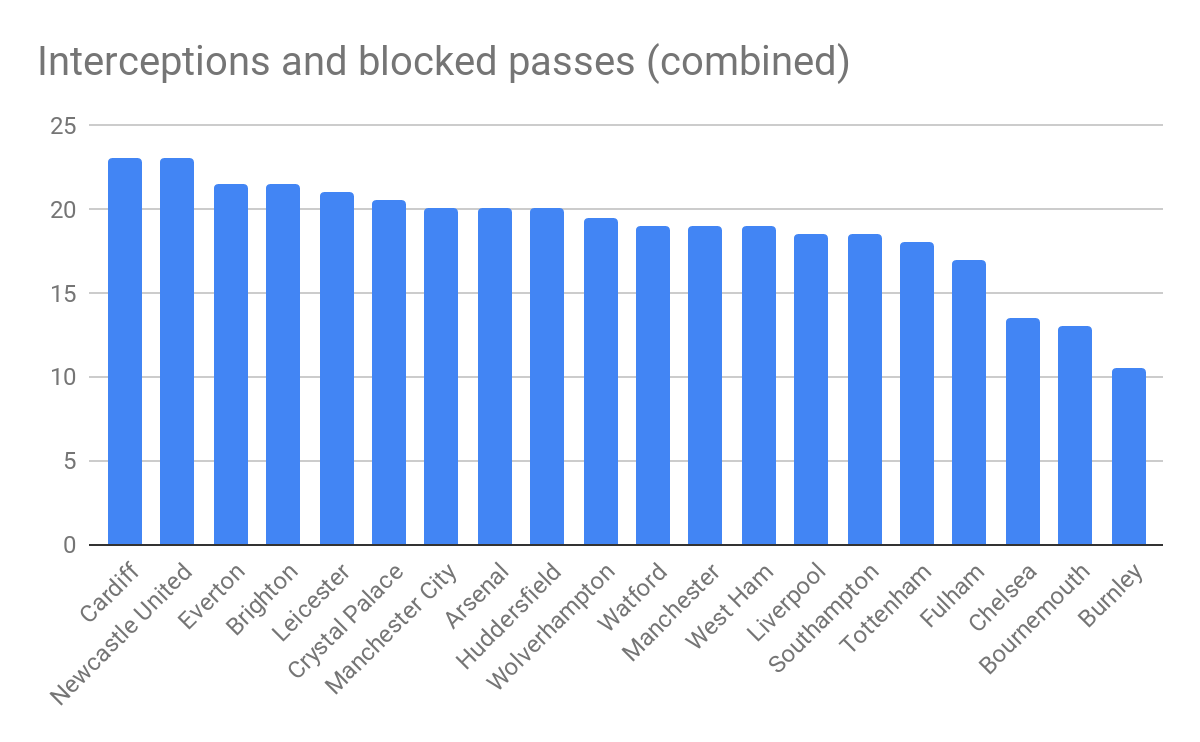 One thing I like to point out is that there is very little statistical variation between Fulham and Cardiff in terms of interceptions per game but there are three fairly weird teams in the long tail who don’t seem to do much intercepting. You’ll notice that Burnley is also 2nd least in tackles per game. This is a style of football: they are teams known for their defending and abdication of the ball, but they actually don’t do much in terms of proactive defensive stats. That’s what sitting back in the low block looks like on these charts.

In attack, Arsenal were somewhat stifled by the two teams they faced and were unable to create any shots in the six yard box. That’s where Aubameyang feasts. So, I expect to see some shots there tomorrow. But Arsenal were just mid-table in terms of total shots taken. 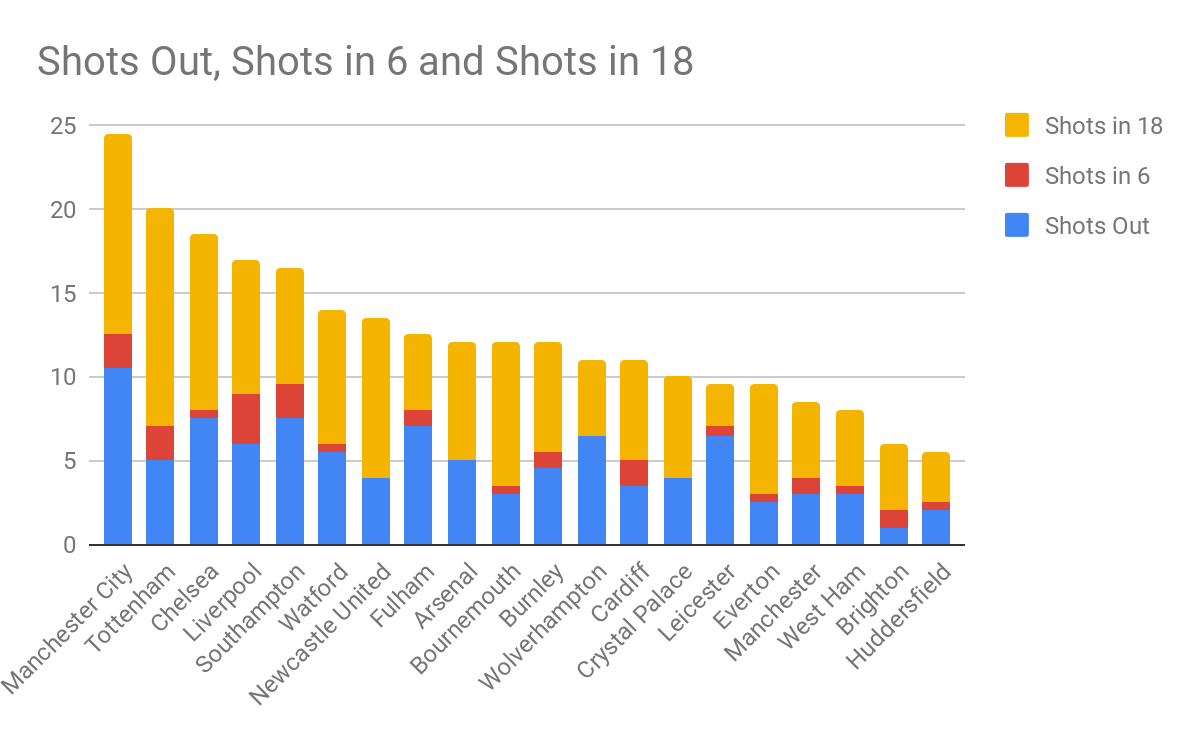 If I could sound one hopeful note, it’s that Arsenal were 6th in terms of chance creation. 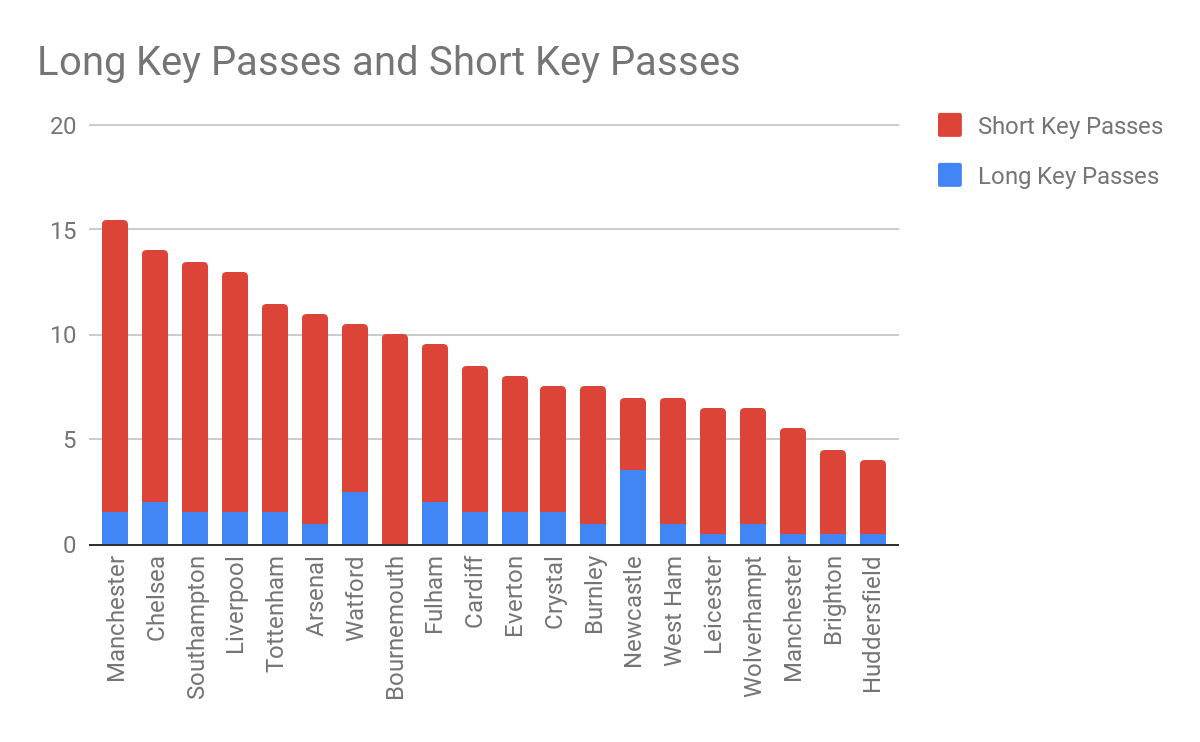 And my final chart: the expected goals chart. Here I have ordered the teams in actual table order but I’m not sure I like it.. 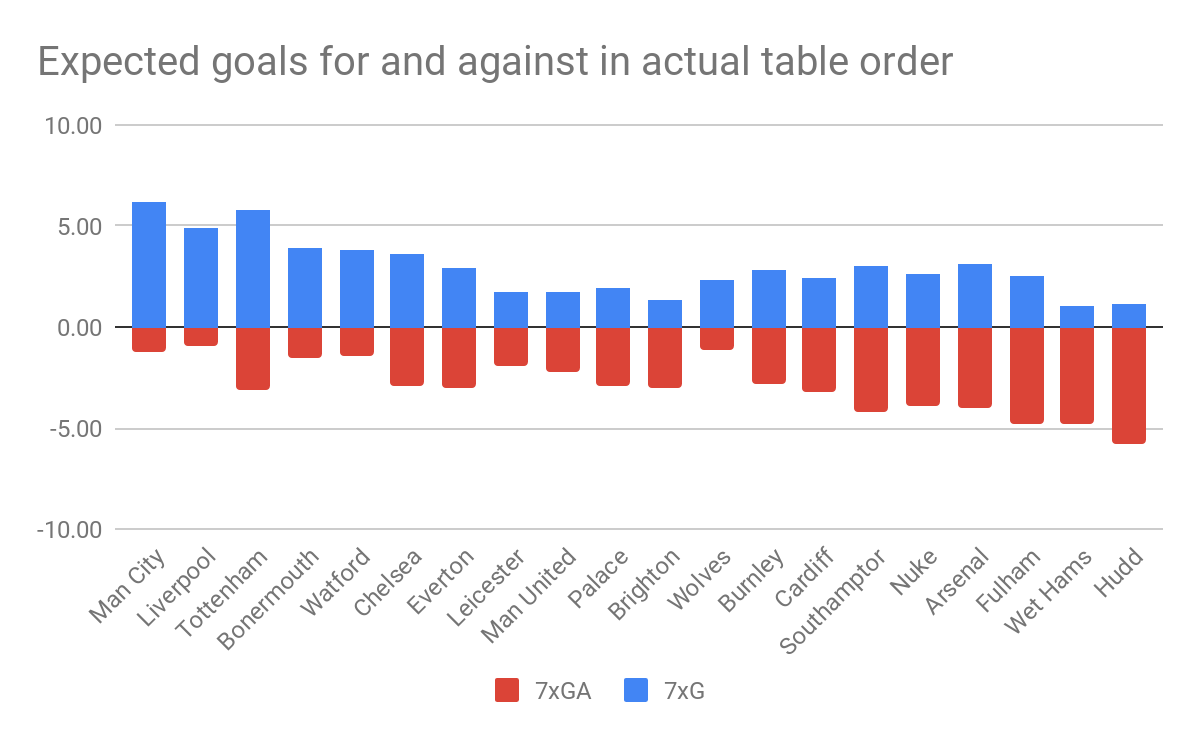 This chart, along with the key passes chart, shows that Arsenal have some hope going forward. If they can get some solid defensive performances (shrink the red bar above), they could start to wrack up some wins. Also note that West Ham are apparently not good attacking nor defending.

As for West Ham’s stats, 1. They don’t create much, 2. They don’t score much, 3. They do tackle a lot, 4. Jack Wilshere’s dribbling is way down (2 per game, compared to 3.2 in EL last season), his shots are down to 0.5 per game, his key passes are down to 0.5 per game, his tackles and interceptions are WAY up to 1.5 per game each (from 1.2 per game combined last season), and his fouls drawn are WAY up to 3.5 per game. Basically, Jack is going to dribble at Guendouzi/Torreira/Xhaka and try to draw fouls. One other weird thing about West Ham is that they already have 8 yellow cards (leads the League), considering the fact that both managers are under a lot of pressure here to get their first win I’m expecting a fiery match. Expect Wilshere to be a flash point.

Sources: Opta, via Whoscored.com, and my personal database.