Week 15 - United get foul and the process rumbles on: Behind the Numbers

Sorry that I didn’t post yesterday after the 2-2 draw against Man U but work has been busy and compiling these mid-week posts can be a real Fellaini. But! I managed to put something together that I think is interesting, so have a peek.

In the match against Man U, Mourinho sent his men out with a target in mind; 19 year old Arsenal phenom Matteo Guendouzi. United committed 6 fouls on Guendouzi in this match which made him the most fouled player in the game with twice as many kicks as the 2nd most fouled player, Lucas Torreira (3). Instead of trying to play football around the Arsenal midfield, Mourinho sent out his players to simply kick the Arsenal midfield.

Torreira is also now Arsenal’s most fouled player. He’s been hacked 34 times in the League, the same number as Harry Kane. Only Richarlison (38), Zaha (43) and Hazard (43) have been kicked more than Torreira (so far) and it’s obvious now that teams are just out to kick the Arsenal midfield.

Of those “most fouled” Torreira has only attempted 9 dribbles all season. Kane has 40 dribbles this season, Richarlison 43, Zaha 67, and Hazard 64. Of the top ten most fouled players, most of them follow this same pattern of being strong dribblers. The only other player who has a weak dribble/foul correlation is Hojbjerg who also only has 9 dribbles but has been fouled 29 times.

Lending more evidence that teams are using tactical fouling to stop Arsenal playing the ball out, the three most fouled players on the team are Torreira, Xhaka, and Guendouzi. Last season the most fouled players were Alexis and Wilshere, who also led Arsenal in attempted dribbles per game. Teams are clearly trying to harass Arsenal’s midfield and force turnovers.

In the United match this tactic both did and it didn’t work. Guendouzi led all players with 98 touches. He also completed 89% of his 74 passes. Torreira was also calm in his midfield duties, completing 90% of 64 passes and unlike Guendouzi was also able to create two shots for his teammates, one for an assist off a corner for Mustafi’s goal.

Neither player was able to shine defensively. Both attempted just 2 tackles (each) and only Torreira had an interception (1) and a block (1). Maybe that’s what Mourinho’s tactic is good at, if players are down holding their ankles or wondering why their hair has just been pulled it’s hard to put in a tackle to win the ball back.

(xG are my own personal calculations based on shot placement)

I looked at the previous season’s matches and compared them like for like with this season and the results are interesting. First, I had to decide which of the three relegated teams were most alike. Cardiff and Stoke play a similar style but Wolves and Fulham are nothing like West Brom and Swansea of last season. So I just made the Fulham match stand in for the West Brom match and Wolves stand in for Swans. There is a difference of +1 additional point for Arsenal if I swap those two teams, by the way. Anyway, to the data!

First, the shots, goals, and conversion of big chances FOR Arsenal: 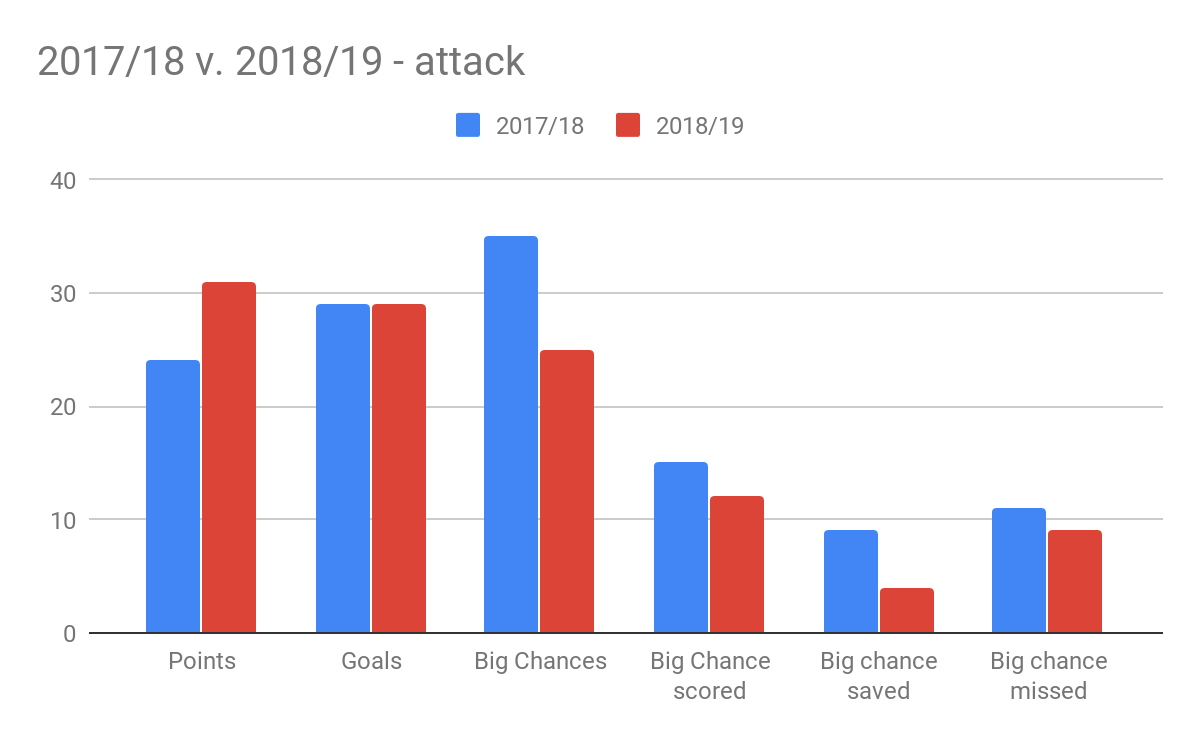 The differences between the two seasons are much subtler than I expected. In the “good” category Arsenal are +7 points better off this season compared to last. Goals scored are exactly the same: 29. That number probably seems weird to you but we remove own goals and penalties because those aren’t normally predictive of how well a football team is playing. The remaining attacking stats are down from last season: Arsenal have created fewer big chances, scored fewer, had a lot fewer saved and missed. This is the main reason why Arsenal’s xG numbers are lower than the actual goals scored: xG relies heavily on big chances. For example, if a team scores a lot of goals from outside the box (which typically score at about a 3% rate) they are going to overperform their xG. That’s exactly what’s happening with Arsenal: last season in these 15 fixtures, Arsenal scored 4 goals from outside the 18 and this season we already have 8 - Arsenal lead the League in that stat with Man City 2nd at 7. Those goals are split evenly between Lacazette, Auba, Mkhi, and Xhaka. 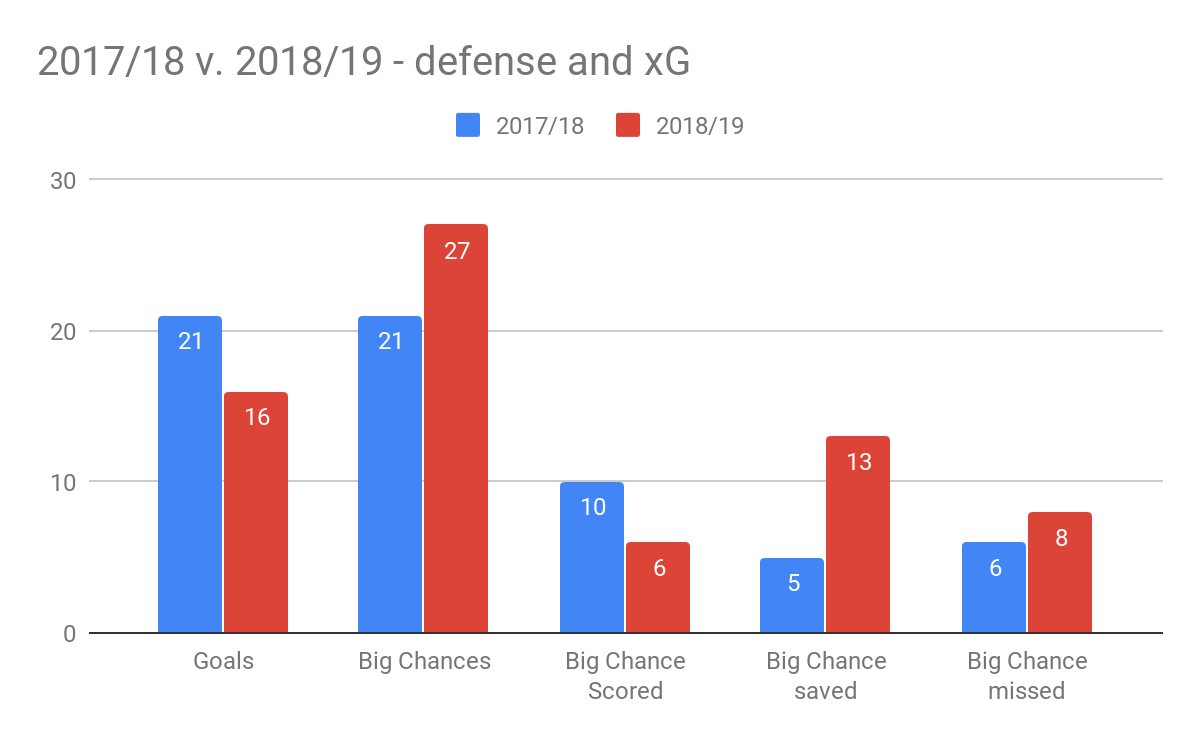 Defensively Arsenal are allowing fewer goals - which is positive - but giving up more overall shots than last year and (scarily) more big chances. Remember that we are comparing match for match with last season, not just the overall performance. So, in the chart above, goals allowed is a comparison of the goals Arsenal allowed in the same 15 matches (home against City, away to Chelsea, etc) last season as this.

What has saved Arsenal so far this season has been.. Uhh.. saves. Leno and Cech have made 13 Big Chance saves this season for a League leading Big Chance saves rate of 68%. Another way to put this is that Arsenal’s 15 opponents have scored just 22% of their big chance attempts this season where the League average is 45% and last season these same opponents scored at a 48% rate.

We are approaching half-way point in the season and these numbers still look a bit scary. It’s unusual to see a club with a negative shots ratio and negative big chance ratio win as many matches as Arsenal have won. Typically, I would warn that that this is a serious problem and that we should be looking for a “correction”.

Anyway, that’s what I have for you today. Let’s hope that tomorrow morning we get a big win for the Arsenal and three more points.