The Bundesliga Is Back, But What Next For Football?

After several weeks without any major football taking place, the Bundesliga returned yesterday.

The Coronavirus pandemic has unfortunately put a halt to normal life all over the world and sadly thousands of lives have been lost, so talking about sport can seem irrelevant and unimportant at times like these. However, this weekend, I think we were all reminded of how much the beautiful game means to us. With millions tuning in to watch the German football league, it was so nice to just be able to see some live sport on our screens and get a sense of normality, something that has been missing especially for us here in the UK for a long time. 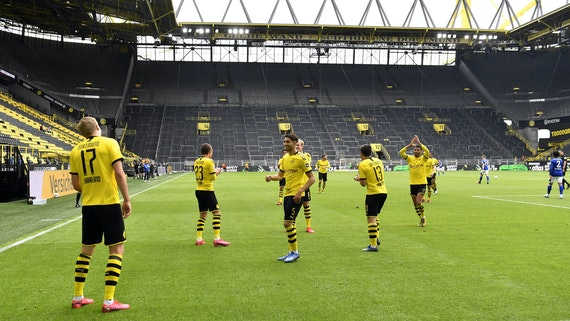 The Dortmund players keep their distance after Haaland scores the opener: bt.com
Regrettably, some countries haven't been able to follow Germany and resume their football leagues. France became the first big European country to end it's seasons, with Ligue 1 and Ligue 2 finishing. The Belgian Pro League along with the Eredivisie have also put an end to the 2019/20 campaign.

Training has resumed in Spain, and there's hope in Italy that Footballing duties will also be able to get underway once again soon. Perhaps a glimpse of hope for two countries who were badly affected by the virus at the beginning of the outbreak.

What about England? Well, it seems the majority of managers and players don't even know what's happening themselves yet so I'm not entirely sure either! One bit of confirmation we did get this week was that League Two's season in the EFL has come to an end, this came after all 24 clubs in the division voted to finish it early.

Concerning the Premier League, we know Arsenal along with the majority of other clubs do ideally want to finish the season when it's safe to do so. However, some managers and players do have major doubts about the resumption.

One of those players is Watford Striker Troy Deeney, who is concerned about the health and safety of his family. Speaking on Instagram, Deeney said:

Another player who shares a similar opinion is Norwich City Captain Grant Hanley, speaking to Sky Sports, the Defender said:

"I think the overall feeling is that players have got concerns, there's just so much uncertainty. My missus is pregnant and she's due at the start of July, so there's obviously worries there for myself. Every team and player has got different views on it. Some lads have obviously got vulnerable family members or whatever. Ultimately it's putting your family at risk that is the main concern."

Meetings between the Premier League and it's clubs are set to take place again this week, with testing and training resumption set to be the main talking points and hopefully in the end...they will be clarified and confirmed too! According to The Athletic UK, tests for players and staff are set to take place Sunday and Monday with results available in 24hrs. The next step is to get a vote from each club to see if they agree with a return to training, if the majority of clubs accept, training can resume from Tuesday.

Nevertheless, even when or if Football does make it's long awaited return here in England, it will not be the same for quite some time. As nice as it was watching watching the Bundesliga this weekend, it was also a reminder to us that there will be steps in place which makes things the new normal for Football. Here are just a few of those steps that we will most likely see within the English Football League's if they do indeed resume soon:

• Disinfectant sprayed on the footballs pre-match

• Player separation on the substitute bench

• No supporters in the stands

Disinfectant was used on the football's before kick off in the Bundesliga: AFP

I know that these scenarios are far from ideal and there are big changes that we will have to get used to, but that's just the situation we find ourselves in. Rules must be in place to help prevent the spread of the virus and i think these will be in place for a long time.

At the end of the day, it's a start i guess! We've got to look at the positives.