Southampton 3-2 Arsenal: Behind the Numbers

Arsenal lost 3-2 to old bogey team Southampton ending the months-long unbeaten run as some familiar failings from the Wenger era reappeared. Let’s have a look behind the numbers to see why.

First, Arsenal struggled to get the ball forward. Xhaka was deployed in the CB role along with Koscielny and the Gunners ended up passing the ball back and forth between those two and rarely into the feet of Aubameyang who often toiled alone up top. 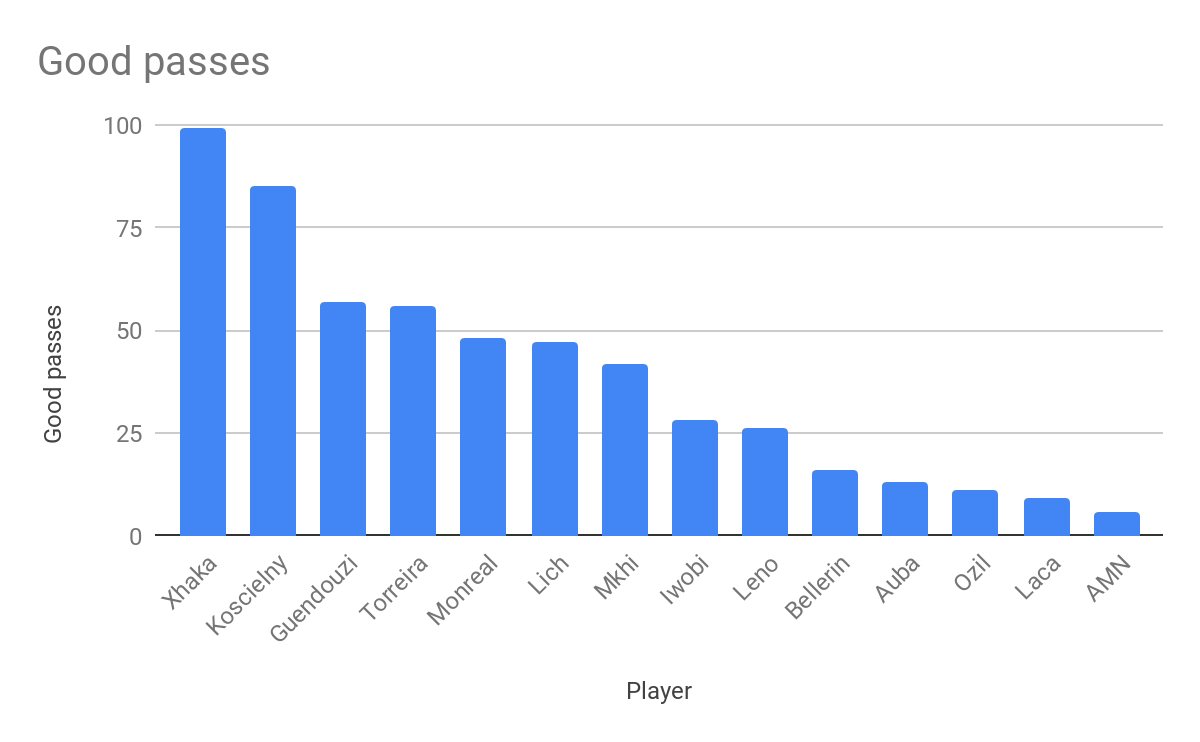 According to the chart above Xhaka completed 99 passes in this game but tellingly 55 of them were either to Monreal (24), Koscielny (20) or back to Leno (11). He only completed 15 passes to Guendouzi and 7 in to Torreira. Koscielny was Arsenal’s 2nd most prolific passer with 85 but he completed 34 to Xhaka and 24 to Lich. Koz was only able to find Guendouzi and Torreira a combined 14 times. When Guendouzi had the ball, he rarely passed it wrong but that’s because most of his passes were to the defense as well: of his 57 passes, he only completed 3 passes to Iwobi, 3 to Mkhitaryan, and 5 more (total) to the attacking players, that means he moved the ball to a forward just 11 times in this game. Torreira fared slightly better: of his 56 completed passes, he gave the ball to Mkhi 6 times, Auba 3, Iwobi 2, and Laca 2 for 13 total passes to the forward players.

The main reason why Arsenal couldn’t get the ball forward was because Southampton swarmed Arsenal and outworked them throughout the match. Once again Arsenal’s midfielders were targeted by the defense. Guendouzi received 5 fouls in this match and Torreira on 1, though there were a few in there that another referee might have called different. New manager Hasenhuttl must have watched the tapes because he had Romeu and Hojbjerg “putting themselves about”: they made a combined 8/9 tackles against Arsenal in the midfield committed an additional 4 fouls and had 4 interceptions to help shut down the Arsenal attack. I think it’s fair to say that teams have figured out Arsenal’s pattern of passing and are able to press, foul, trap, and otherwise harass the Arsenal attack into giving up possession or passing back.

Guendouzi did have the best pass of the game, for Aubameyang in the 5th minute. That shot had Arsenal’s best xG in the game of 0.33. Second-best shot was Mkhi’s headed goal off the Monreal cross.

In attack, Southampton looked to exploit the CB pairing of Koscielny and Granit Xhaka with aerial balls. Neither player seemed to struggle statistically with Aerial Duels but the trick with aerials isn’t so much in how many the players won, but rather how many they didn’t even make. Koscielny won most of his aerial duels (4 of 5) and yet Ings scored two headers and Austin scored one, how? Well, Xhaka didn’t have a single aerial challenge and two of their three goals were unchallenged headers. Of the three goals there were only 1 total aerial duels, and that was for the Ings looping header goal, which was the only duel Koscielny lost. I want to be clear that I’m not blaming Koz and Xhaka here: Koz is still recovering from Achilles surgery and Xhaka is not a CB.

The bigger problem is that Arsenal didn’t close down on crosses. Southampton didn’t try a ton of crosses, just 14, but Arsenal only blocked 1 - Koscielny, in his own 18 yard box, with a clearance. There was a dearth of effort in closing down from Arsenal’s wide players and it was frustrating to watch. As much as I have to credit Redmond and Sh.Long for their pinpoint accurate crosses, I have to shame Arsenal’s midfielders and forwards for letting them have the time and space to play those passes.

The lack of effort from Arsenal was especially disappointing because, 1) they were pressing Arsenal and 2) both of Arsenal’s goals were the result of pressure. I hope Emery sets a fire under the players who didn’t give maximum effort today.

And finally, because of Leno’s error for the Southampton third goal, Arsenal now have 15 errors in 16 matches, with 4 errors for goals, 3 of those from Leno alone. This continues the trend from last year where Arsenal led the League with 33 errors in 38 matches.

Emery’s process needs to work on clearing up these mental errors, pressing without the ball, and dealing with pressure in return. As much as he inherted some really great qualities from Wenger, it’s Arsene’s legacy of sloppiness that has to be Unai’s most pressing concern.