Qarabears 0-3 Arsenal: Behind the Numbers

10 - Number of times Arsenal were dispossessed in our own half

20 - Number of times Arsenal were dispossessed in the match

Qarabag took a leaf out of the “how to play Arsenal” playbook and pressured the Gunners in possession getting 10 turnovers in the Arsenal half. They especially targeted 19 year old phenom Matteo Guendouzi for the heat, forcing him into three bad touches and directly dispossessing him once. He was also Arsenal’s most fouled player (2 times, tied with Iwobi) and there were some pretty hard fouls in there, fully sweeping the legs when he did wriggle free from pressure. 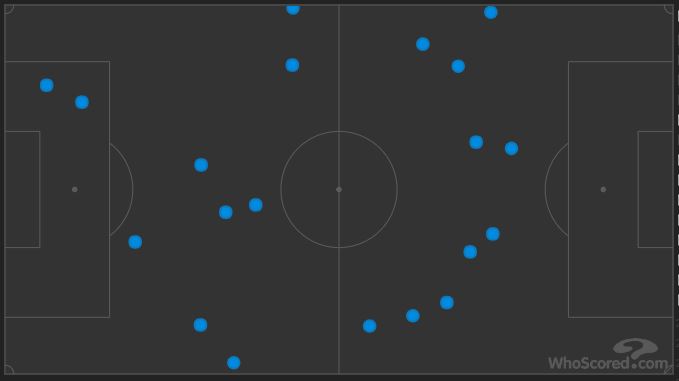 Above is the Arsenal turnovers map, Arsenal attacking right to left, the four dots in the middle of Arsenal’s half are - from top to bottom - Guendouzi, Guendouzi, Guendouzi, Torreira. At the top of the screen - again in our own half - is Lichtsteiner, ESR, and Guendouzi. At the bottom of the map is Iwobi, Iwobi, and Ozil. By almost any measure, this is pretty awful.

This pressure also showed up in a slightly reduced passing rate for both of Arsenal’s central midfielders: Torreira went 30/35 (86%) and Guendouzi 66/74 (89%). I didn’t include Elneny here because for most of the match he was deployed in an advanced role, sometimes even as the #10. But Elneny also coughed the ball up 3 times, though his turnovers were in the middle (on the left) and his passing rate (which is always excellent) was a crazy good 98% (47/48).

It is a statistical fact that midfielders are more solid in possession the older they get. So, a 19 year old like Guendouzi shouldn’t be expected to have the solid gold possession numbers that a 29 year old midfielder will have. It’s also a fact that losing possession under pressure like this is a team problem more than an individual one. After all, if you don’t have anyone to pass to or if your teammates pass the ball to you in trouble it takes a an experienced or special player to get out of that trouble.

3.9 - Ratio of completed passes to lost possession by Arsenal this season.

I wanted to know if Arsenal’s 20 turnovers and 67 bad passes were unusually high stats for Arsenal because it really felt like this match was especially ugly! But actually… In this match we averaged 5.2 completed passes for every incomplete pass or turnover. Which is among the elite clubs for that ratio. Man City make the most mistakes of any club in the League. They make 70 incomplete passes per game and they are dispossessed nearly 30 times a match. That’s  almost 100 times a game that City lose possession. Before I looked at the data, I had a suspicion that in terms of a ratio, they would probably lead the League in completed passes to lost possession. And, they do. They complete 6.9 passes per incomplete pass or lost possession. This is just a preliminary stat. I’m not suggesting I’ve done anything groundbreaking here. Nor do I think that just the dispossessed, bad touch, and bad passes are the only turnover stats that matter. And WHERE you lose possession (see above) is MUCH more important than if you lose possession. In short, I’m not pretending to tell the whole story 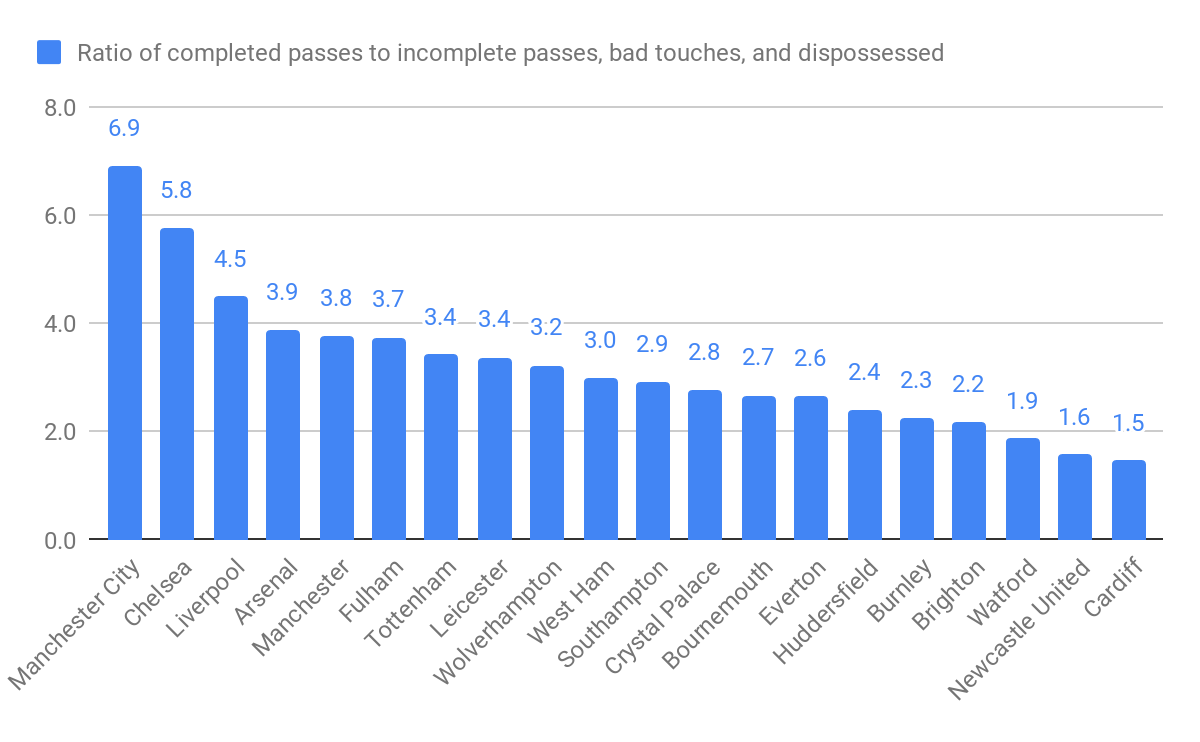 One surprise there is Chelsea, I didn’t think they were that good of a passing team. I guess I haven’t watched them play enough. I did know that Fulham is considered a good passing team and we can see that Arsenal have some work to do to get into those top two levels of play, where City and Chelsea are. But as bad as it looked yesterday against Qarabag, the Gunners ended the match with a very respectable 5.2 ratio.

Now, in my mind, I think I probably expected a 7.5 ratio. Which explains why I grumbled a lot during the match. But overall, even though we lost possession way too often in our own final third, which is a problem that Emery absolutely has to address… overall, we weren’t nearly as bad as I initially felt. Which goes a long way to explaining how Arsenal got 4 big chances and scored 3 goals.

Stephan Lichtsteiner may feel like he has the body of a 28 year old, but he plays like he has the body of a 37 year old. He’s ponderously slow, he can’t get back quick enough to cover, he can’t block crosses, he almost never seems to have time to win possession back, and when he does get the ball in attack he inevitably either crosses the ball directly into his opponent’s legs or falls over trying to make a cross. I love the words he says in his interviews about how he’s playing to make Arsenal better but on the pitch he’s clearly well past his sell-by date.

I highlight the fact that he only made 1 attempted tackle because his side of the pitch was dominated by the Qarabag LB (Agoli) and AML (Zoubir) and this is a good illustration of how sometimes you can’t look at a player’s stats, you have to look at the players they were marking. 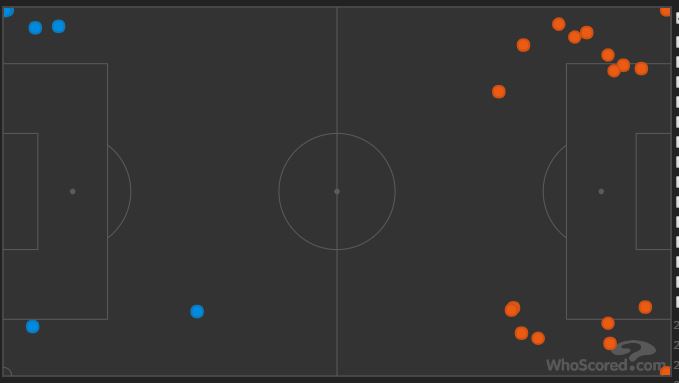 Zoubir was number one among all players in passes in the final third with 31, Agoli was number two with 27. They passed with near impunity down Arsenal’s right. No one was breaking up that play. Neither ESR, nor Guendouzi, nor Lichtsteiner. 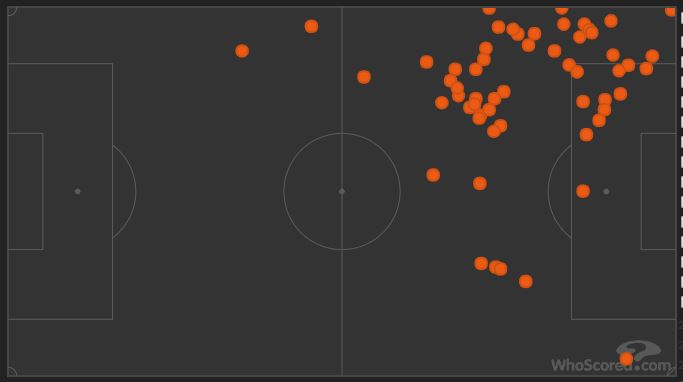 Lichtsteiner also only had 1 blocked pass in this match, that was in the 25th minute, up by the half-way line. He didn’t block a single cross and didn’t have a single interception.

He was also Arsenal’s worst passer: completing just 23/30 passes. In terms of percentage he was slightly better than Bernd Leno’s 72% but in terms of the number of total passes completed, no starter completed fewer.

Sources: screengrabs and all other stats are from whoscored.com today