North London is Red, plus Aubameyang's finishing: Behind the Numbers

Aubameyang has converted 74% of the 31 penalties he’s taken in his career. This is an average conversion rate for all penalty takers. Auba has something of a reputation, however, as a player who misses penalties and that’s because his overall career numbers include six penalties for Gabon, three of which he scored in a single game. At Dortmund, Aubameyang converted just 72% (13/18) and actually went a season (16/17) where he missed 3 of 6 attempts. At Arsenal his conversion rate is just 3 for 5 (60%).

This is possibly a bit harsh because the replay shows that Tottenham encroached on Aubameyang’s penalty and he should have been allowed to retake the shot. That xG missed also includes the block by Vertonghen, a block he was only able to make because he had encroached on Aubameyang’s penalty. But it is a feature of his career that Aubameyang misses a lot of big chances and frustrates his teammates, himself, and supporters in some matches.

I went back through his season and looked at two types of chances that he took: in prime and out. Here’s his shot map in the Premier League this season (from understat.com): 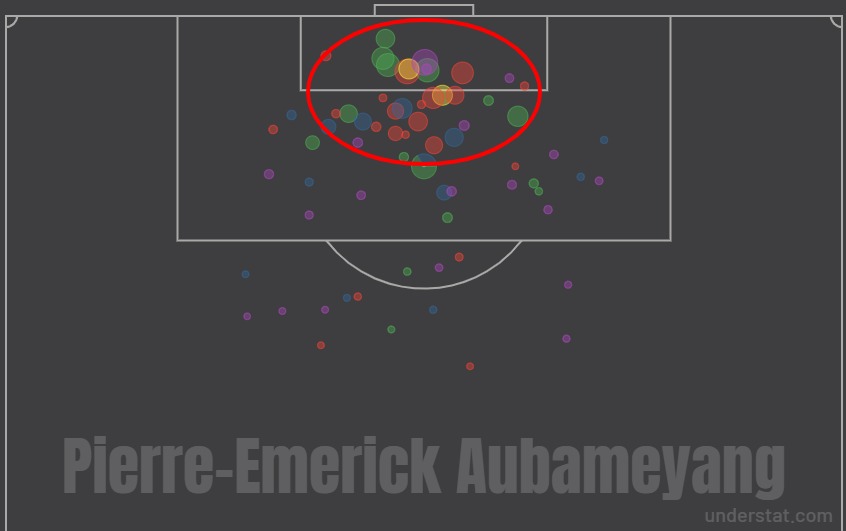 First, the red circle in the middle are areas that I consider “prime” areas for scoring goals. And as the map shows, Aubameyang has taken a lot of shots in prime. This is his strength as a player. He gets shots in those areas, the most dangerous area of the pitch.

Second, the color coding above: green is for goals, red is for missed shots, blue is for saved shots, purple is for blocked shots and yellow is for shots missed which hit the stanchion (people seem to think this is important, for me they are just misses).

Aubameyang’s expected goals in that area this season is 15.07. Now, that’s Understat’s formula, my own formula is much higher but let’s go with the more conservative, and also includes penalties which some people think you shouldn’t include. Anyway, Auba has an expected goals in prime of 15.07 but he’s only scored 10.

This is where I think “expected goals” is very useful. It matches up well with our perceptions that a player “should have” scored a shot that they took. In the Tottenham match, the shot by Erikson (their only good shot in the game) right in front of goal was one of those shots that they “should have scored” but Leno made a great save. Auba had a penalty saved and a shot a few feet in front of goal illegally blocked, Lacazette also had a shot screwed wide that he probably should have scored.

Where expected goals sort of frustrates is that outside of that prime area, shots have very tiny assigned values. A shot from outside the box can have an xG as low as 0.02 (2% scoring rate) and every time one of those goes in it will balance out a player who has maybe a poor finishing rate inside the prime area.

Aubameyang is a prime example of that: his expected goals outside prime is just 2.64, but he’s scored 6 goals. When you look at all shots he’s taken this season, he has an xG of 17.71 but an actual goals scored of 16. That’s actually not bad in terms of overall shots but because he’s -5.07 in prime areas, it feels like he’s a wasteful finisher.

I looked at Lacazette’s shots chart and he is also underperforming in the prime area: 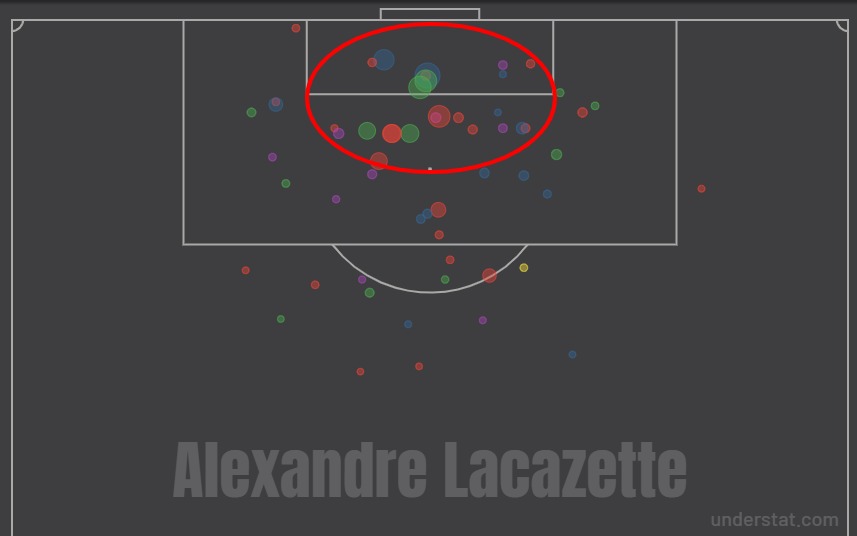 I don’t have time today to look at all of the top strikers in the League closely but I did glance at their shots charts and none of them have as many misses as Aubameyang does in prime and the 6 yard box. Just as an example, this is Sterling’s chart: 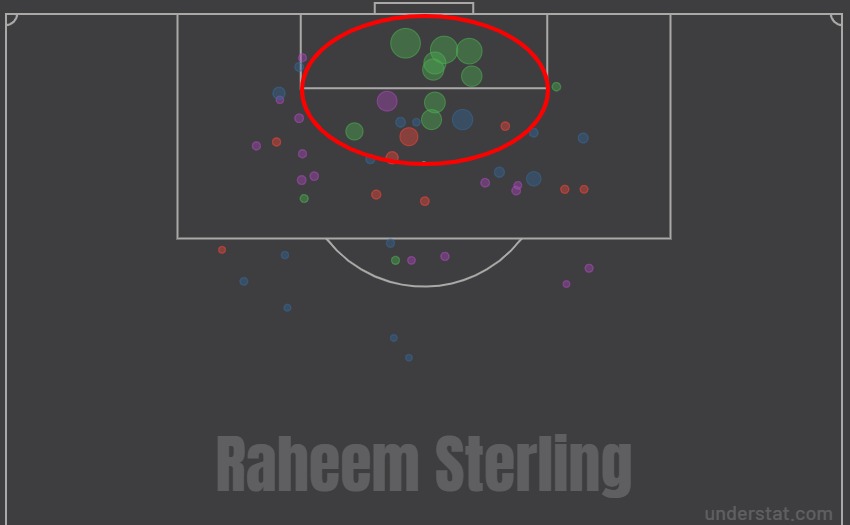 Perfect inside the 6 yard box. You have to admit that finishing is pretty astonishing.

6.19 - Expected goals for Arsenal over the two League matches that they have played against Tottenham this season.

5.38 - Non-penalty expected goals for Arsenal over the two League matches against Tottenham this season

1 - Non-penalty goals Tottenham have scored over the two matches

1 - Red cards that Anthony Taylor gave to Torreira for winning the ball and pulling out of a challenge.

Fact of the matter is, Arsenal outplayed Spurs this season by a huge margin. 4.38 expected goals in two games is a crushing. Especially since this is Understat and they are notorious for undervaluing big chances. Here’s the xG over both legs for the last few years: