1 - Number of times Unai Emery and Rafa Benitez have faced each other before. Emery beat Benitez in their only previous match against each other, a 3-2 win with Sevilla over Real Madrid in la Liga back in November of 2015. The match was notable for the fact that despite the massive differences in budget (transfer and otherwise) and the fact that Real Madrid went into the match top of la Liga, having conceded just 4 goals in 10 matches, Emery’s Sevilla gave a great account of themselves; controlling 45% of the possession, passing the ball around, creating 11 shots in the Real Madrid 18 yard box (the same number as Real) and even creating 4 big chances to Real Madrid’s zero. Sevilla just outworked Real, winning 10 more tackles (18-8), winning more dribbles (11-9), winning the ball back 5 more times than Real, and even forcing Real into a comparable number of clearances. And they did that without being nasty: fouls were just 13-11.

6 - Shots taken by Mustafi from set pieces this season (leads the Premier League). There was an interesting bit of serendipity yesterday when I was looking through the stats (you know, like a nerd) and noticed that Mustafi leads the league in shots off set pieces with 6. Then I went to the dot com to check on Emery’s press conference and noticed that they had an article about Mustafi’s aerial threat.

Under Arsene Wenger (especially the last 10 years since stats became widely available), Arsenal seemed to under-emphasize the importance of capitalizing on corners and free kicks: for the last three seasons Arsenal were consistently between 7th and 10th in the League in shots from set plays (each season averaging exactly 3.4 shots from set pieces per game) and the same in terms of goals scored off those set plays. Arsenal are still not great at creating shots off set pieces (they are 12th with 2.8 per game, down from 3.4 per game last season) but that number is skewed because Arsenal have only played 4 matches this season (“against Man City” yadda yadda).

However, one thing that is encouraging is that Mustafi is winning 85% of his aerial duels so far this season. Small sample size aside, that’s a massive step up from last season and a career high. 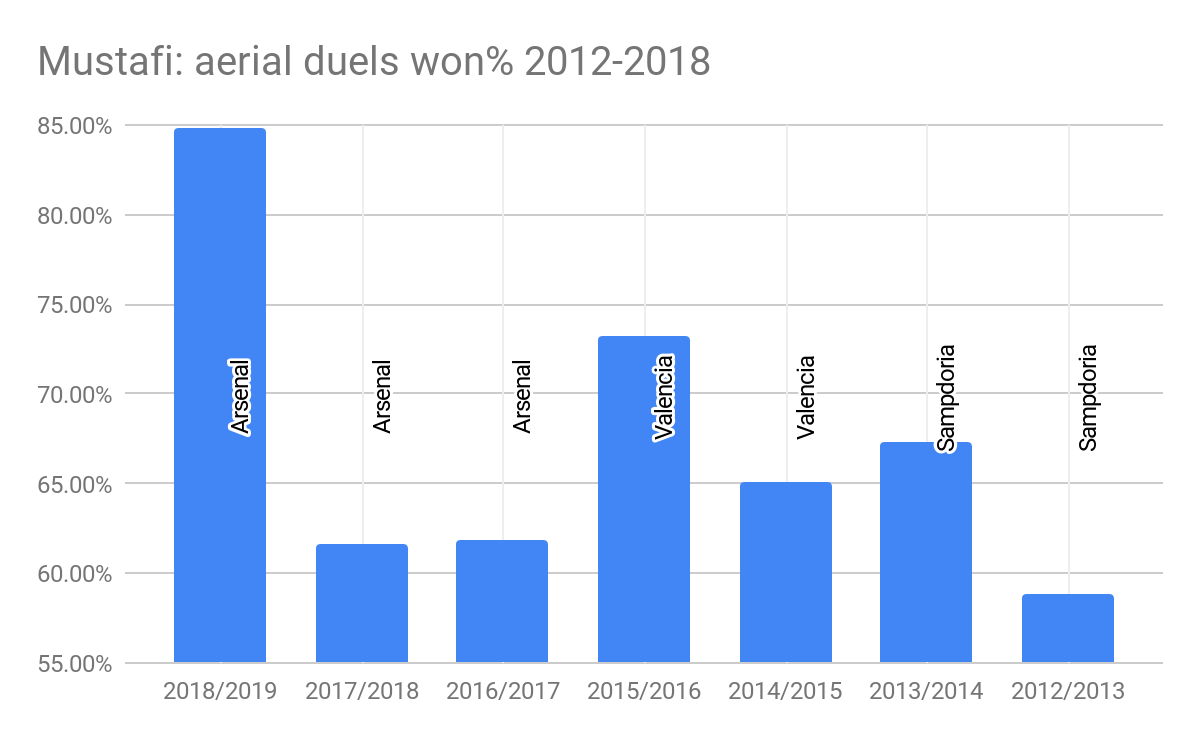 So far his aerials won breakdown is 4 in the opposition box, 2 in midfield, and 5 in Arsenal’s box. Yes, he’s only won 11 aerial duels but that does lead Arsenal.

What I’m seeing in these stats is a concerted effort by Emery to get Mustafi shots off set pieces. This makes sense from an Arsenal attacking standpoint: both Mesut Özil and Granit Xhaka are historically good at creating chances off corners and free kicks. Özil led the League with 3 assists off corners in 2016/17 and lead the League in chances created off corners in 2015/16 (with 39). But Arsenal’s total shots created off corners between Özil and Xhaka has plummeted the last two seasons and they created just 19 combined last year.

This is obviously down to the fact that Arsenal are missing Olivier Giroud and his beautiful forehead: Giroud hasn’t been Arsenal’s set piece threat since he led the Gunners in set piece shots in 2015/16 with 31 (not a coincidence that was also the last time Özil led the League in set play creation, but interesting because he only created 2 assists off all of those shots created). Since then, Wenger shifted focus and Alexis led Arsenal by taking direct shots on goal rather than creating for his teammates, yet another sign that he was only out for number one.

It looks to me like Emery is reorganizing the set piece attack, using Mustafi’s aerial threat (he was 2nd in shots off set pieces two years ago (behind Alexis). 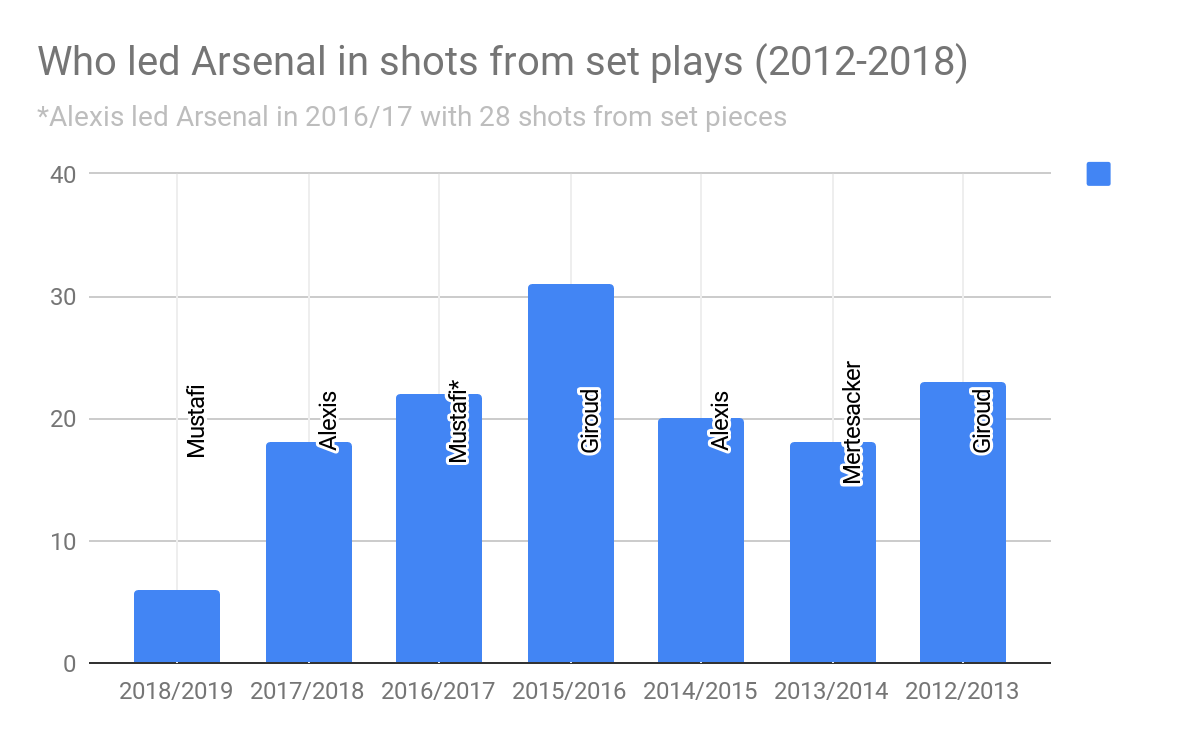 (Note: Mustafi shown in 2016/17 to illustrate that he was a set piece threat two years ago and was 2nd to Alexis in shots off set pieces)

9 - Shots attempted per game by Newcastle this season.

You should know that Newcastle are in the relegation zone and based on both their obvious metrics and the “underlying” metrics, they play like a team that is bound for relegation. 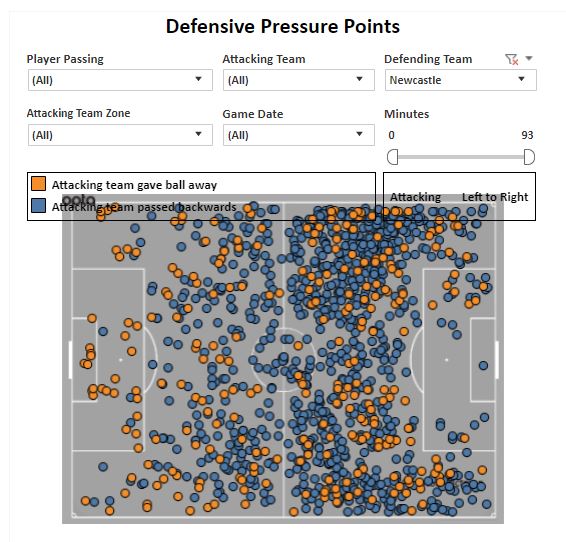 Using Paul Riley’s (@footballfactman) visualization of where Newcastle apply pressure, we see that Newcastle are one of (probably the) the deepest defensive teams in the League. The image above is where Newcastle’s opponents either give the ball away (brown) or pass backwards (blue). The right side is Newcastle’s goal and you can see that the majority of their defensive actions are in their own defensive half. Even Burnley (who we probably think of as a team that sits back in two banks of four) applies more pressure up front than Newcastle (click the link to play with various visualizations).

What’s going to be interesting about this match is that Arsenal are one of the worst teams in the League in terms of giving away possession in their own half.

If I switch Paul’s graphic to show Arsenal as the attacking team and where we give the ball away and pass backward, suddenly, things look very different: 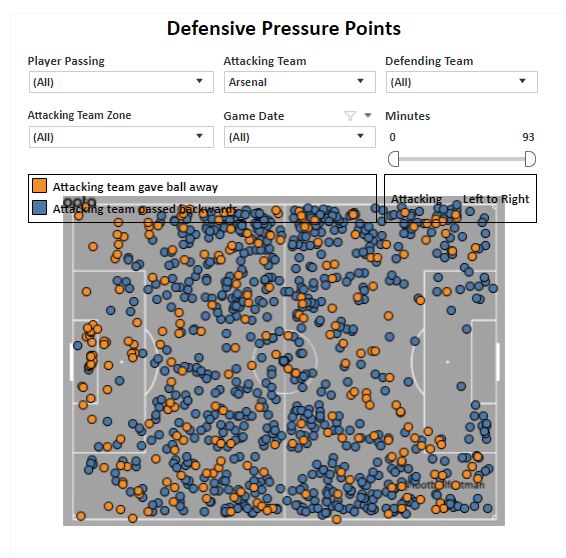 Arsenal are attacking left to right in this graphic and we see that the majority of the giveaways and passbacks are concentrated in Arsenal’s half. If I take out passbacks (in blue), the positions that Arsenal just give the ball away, is pretty harrowing: 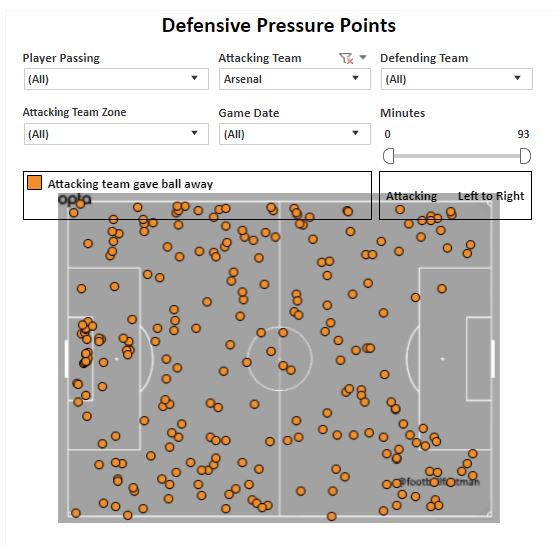 Contrast this to Man City’s attack: 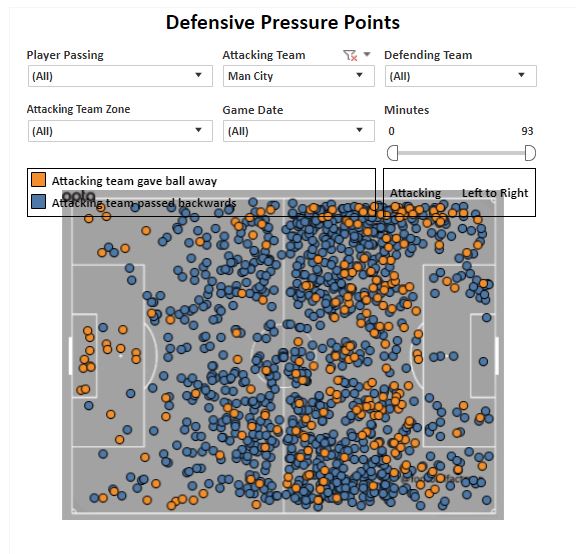 Yes, they lose possession (again, this is in brown) but they do so mostly in the opposition half. If I remove the backpasses (blue), you see it much clearer: 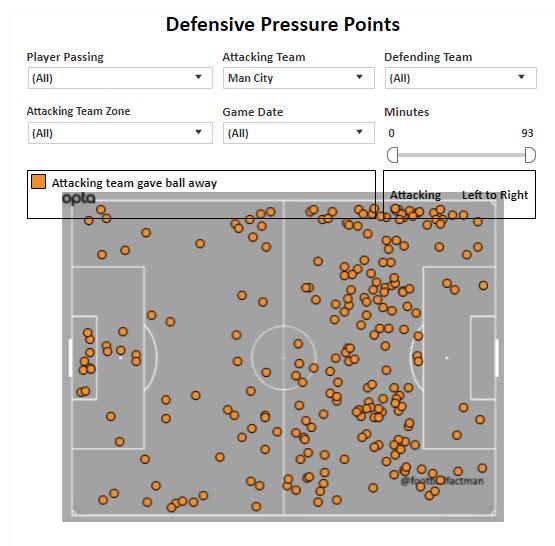 These two charts are basically exactly opposite of each other.

Obviously, Arsenal’s aren’t at Man City’s level (yet) and these charts aren’t intended to make Arsenal look bad. We are also only 4 matches into the Emery era and still working through “the process”. What I think is great about this visualization is that we can use it to track Arsenal across the season and see how well we learned to deal with pressure.And one final insight here, with these graphics. 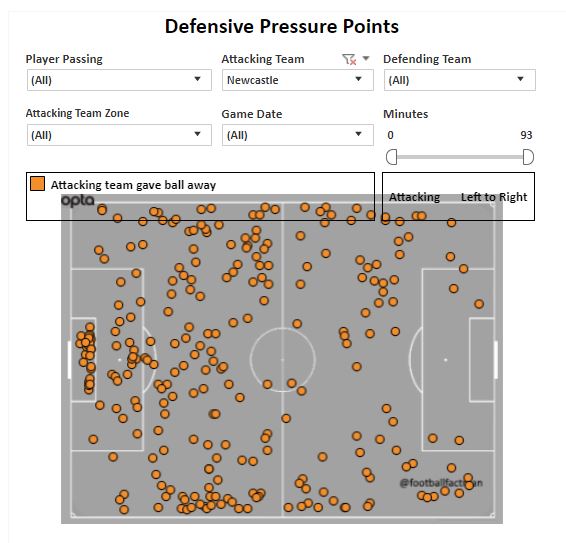 In attack, Newcastle tend to give the ball away in their own half. A high pressure game by Arsenal should result in a high number of chances for Arsenal and I suspect Emery will send the boys out to get after Newcastle whenever they are in possession.