Lucas Torreira is living up to the hype: Behind the Numbers

Lucas Torreira has been labeled “tigerish”, has had columns written about how he “adds steel” to the Arsenal midfield, and folks are already suggesting that the Uruguayan is undroppable.

Earlier in the season, there wasn’t enough data to support these claims but as he’s gotten more playing time, a clearer picture of what Torreira does for Arsenal has emerged. Obviously, we still have a small sample size (not a pun) but the current stats match up with the data from his time at Sampdoria, which had me liken him to N’Golo Kante.

First, some stats that have changed from last season at Samp: 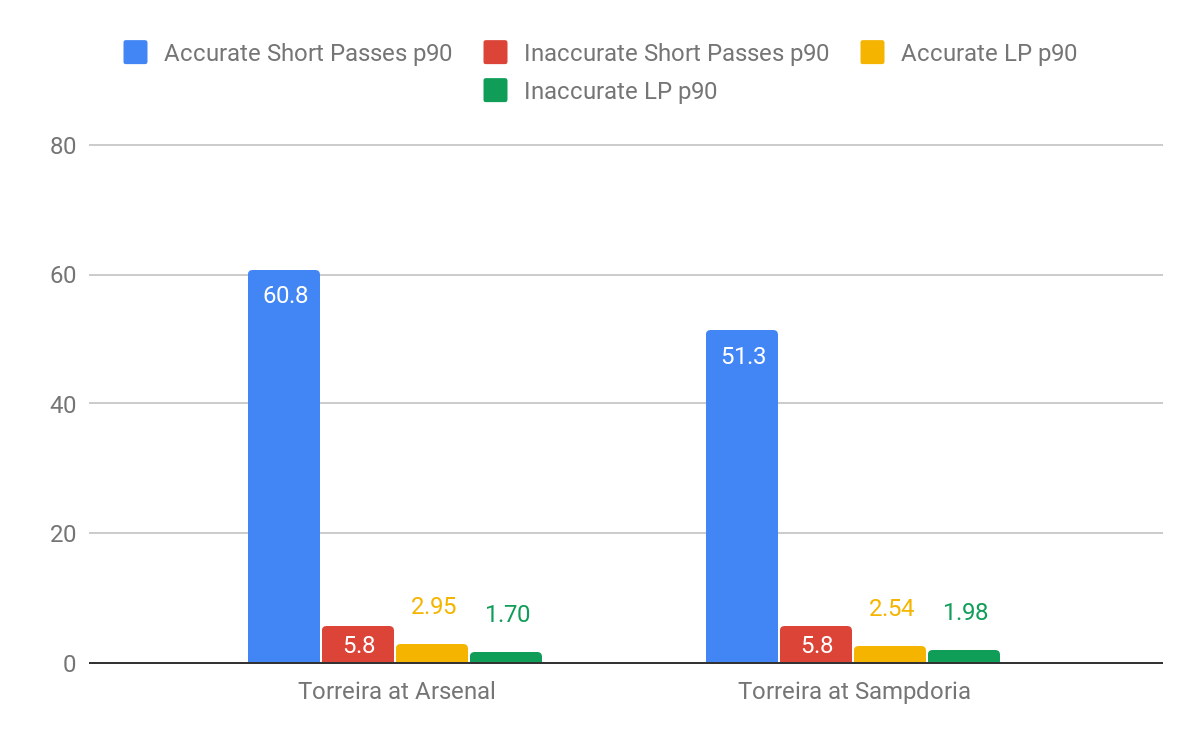 His passing was already good but has improved. He’s passing the ball more at Arsenal (from 61.7 to 71.2 passes per 90) and is more accurate with both his short and long passes (nominal gains in short passes from 90% to 91% but his long ball passing went from 56% to 63%). Torreira has also improved his reliability on the ball and his turnovers and dispossessed rate per90 is down from 2.2 to 1.5. This increased reliability with the ball is likely due to being played deeper than he was last season and also being partnered with a second midfielder.

Another change is that his overall defensive work is slightly down from last season, but not quite to an alarming level. I like to take a player’s blocks, interceptions and tackles (per90) and add them into one defensive stat I call “BITs”. Torreira’s BITs per90 last season were 5.9 and this season they are 5.4. The drop here comes entirely from him tackling less at Arsenal than he did at Sampdoria: he’s winning 2.5 tackles per90 versus 2.9 last season.

But his tackle percentage is actually way up. 68% successful last season and 78% successful this season, which just means that he’s being bypassed a lot less. Last season he was dribbled 1.33 times per90 and this season he’s one of the Premier League’s most efficient tacklers and is bypassed just 0.68 per90. In fact, Torreira’s “dribbled past” numbers are 2nd in the League when you remove his sub appearances. In matches where Torreira has started he’s only been dribbled past a total of 2 times in 16 attempted tackles. That’s a tackle rate of 2.3 won and 0.3 was dribbled per90.

I then compared his numbers to the other top teams that are deploying a DM* - Man City’s Fernandinho, Chelsea’s Kante, and then some of the other teams like Watford’s Capoue, Tottenham’s Dier, and mid-table Man United’s Matic. 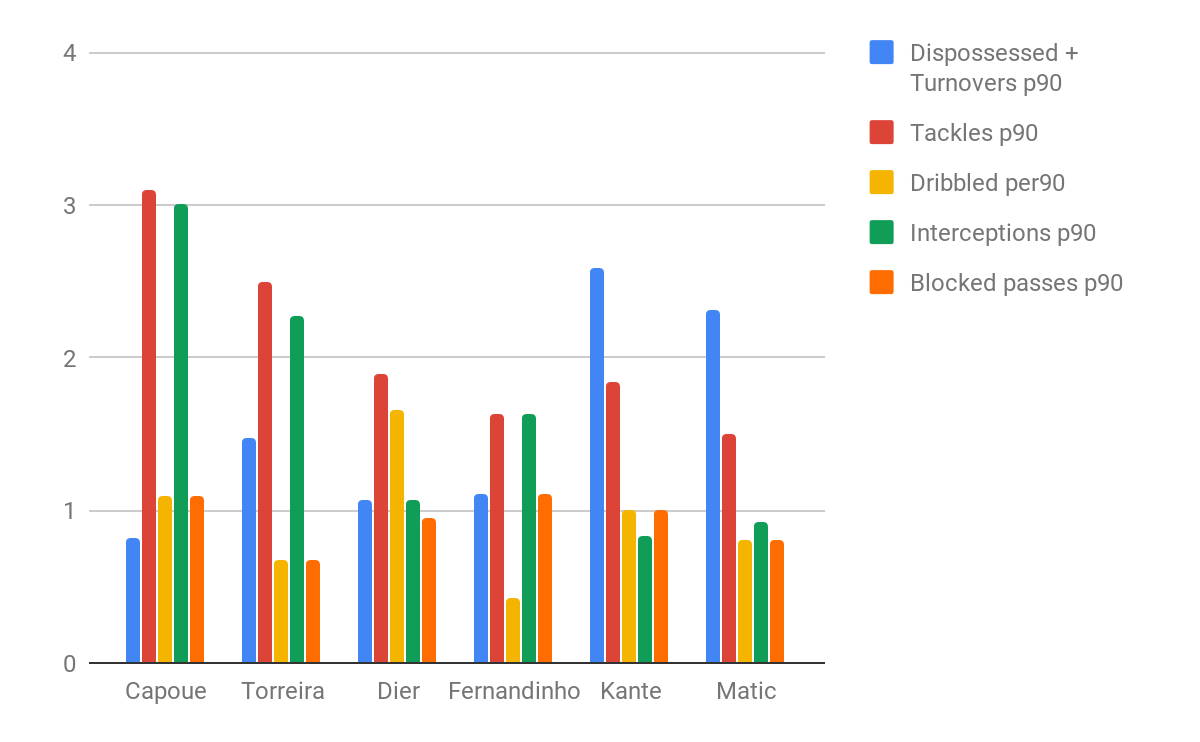 Of that group Etienne Capoue is having a standout season. His defensive numbers are astounding and his number of turnovers are very low. But Torreira is outshining all of his contemporaries in nearly every category: he has more tackles than any of the players, other than Capoue, is dribbled on less than anyone other than Fernandinho (see above, he’s actually second behind Fernandinho in being dribbled past when he’s deployed as a starter), and intercepts and blocks passes more than any player other than Capoue.

There is one slight blot on his playbook: his combined dispossessed and turnovers per90 is 1.5. That’s a bit high for a player who is deployed so deep in a formation. Kante’s turnovers numbers are up (and his defensive stats are down) this year because Sarri has him playing in front of Jorginho. This is a similar fate that befell Coquelin at Arsenal when Wenger tried to play him with Xhaka.

Most of Torreira’s turnovers come from “poor touch” (1.1 per90) and not being dispossessed (0.4 per90). This is definitely a stat that he will grow out of as he becomes more accustomed to the speed of the Premier League.

The puzzling thing is how Arsenal are giving away so many big chances while Lucas Torreira is putting up such outstanding numbers. Part of the answer is that Arsenal tend to be an almost reckless 2nd half team. In first halves so far this season Arsenal’s expected goals difference is a meh.. +0.23. That’s not per game, that’s total. And expected goals against is a total 7.74. Neither of those stats are great but in the second half of games, Arsenal get really loose and have an expected goals difference of -0.52 and an expected goals against of 9.87. I don’t think you can expect (pun intended) anything else when the manager puts on all of his attacking players and chases games late.

The other part of the answer is that there have been a number of key injuries and the team is playing with a new manager in a new system. One final thought: Torreira’s numbers are good enough to make me wonder if he isn’t saving Arsenal from more problems than we already let in. Hopefully we never find out and he’s fit for most matches.

*Liverpool don’t have one yet. Wijnaldum has made the most appearances there but it would be a stretch to call him a DM.