Every week, I usually bring you articles which are focused on the latest stories surrounding Arsenal FC. However, this week I've done something a little different.

I am absolutely delighted to bring you an interview with Comedian, Actor & Writer Bilal Zafar.

Bilal's Stand up performances got him nominated for Best Newcomer at the Edinburgh Fringe 2016, he also won the Hackney Empire New Act Award (NATYS) in the same year. He has been given some exciting roles within the TV and Film industry too, featuring in Last Christmas and Sick Of It.

Bilal is a huge Arsenal fan, so I wanted to get his thoughts on this season so far, Arteta + much, much more...enjoy! 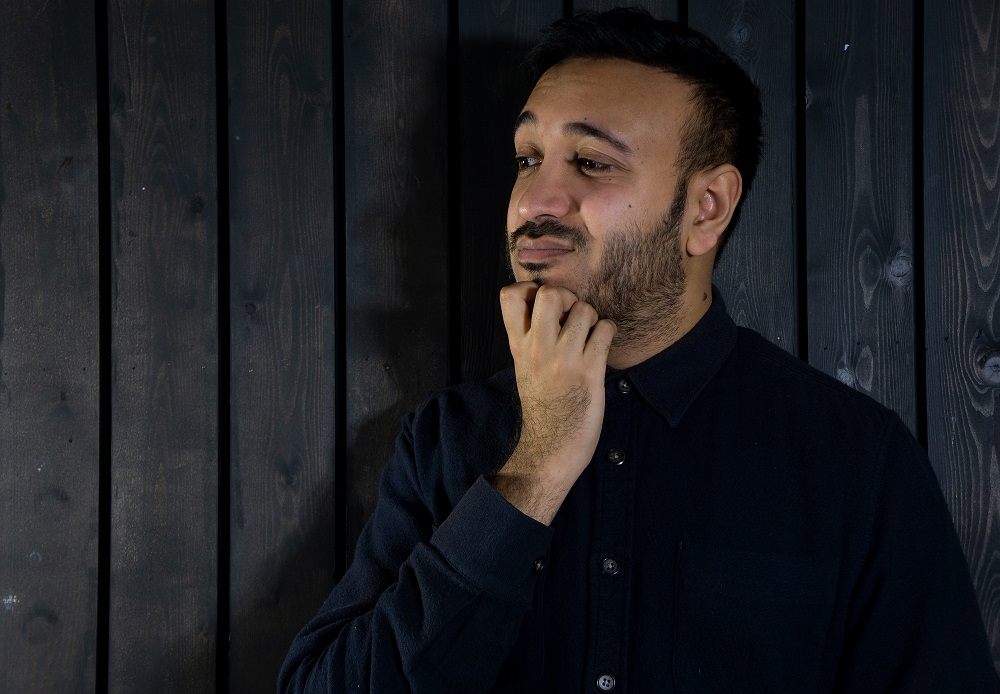 Hello Bilal! First of all, we are obviously going through very unprecedented times at the moment. How are you keeping and how has the lockdown been for you so far?

Well I haven’t found it easy! I make most of my money from performing stand up comedy to live audiences and of course I have no idea when I can do that again...but I understand that it’s all for the best, we are all in the same boat and I’m very lucky to be healthy. I’ve been trying to work on scripts and online content, going for a run everyday (which I’m bad at) and basically trying to live like I have something like a routine which really helps.

We'll move onto your work in Comedy, TV and Film shortly, but to begin with let's start by talking about the Gunners. When and why did you become an Arsenal fan?

I’m from London and my family support Arsenal so I’ve been a fan as long as I can remember. Although the first time I feel like I really, deeply cared was when I was about 9 years old, watching the FA Cup Final against Chelsea in 2002 on TV when Ray Parlour and Freddie Ljungberg scored those beautiful screamers. I didn’t get to go to many games as a child during the Highbury years but have spent plenty of time at the Emirates and I’ve been lucky enough to be a season ticket holder for the last couple of years.

A slightly painful question for you, I'm sorry, but what are your thoughts on Arsenal this season? I think It's safe to say it's been quite a disappointing campaign so far hasn't it? Perhaps one of the worst in a long, long time.

Yeah it’s mostly been pretty depressing! I was at the Emirates for our Europa League exit against Olympiakos and it genuinely felt like one of my nightmares. I’m usually a very positive fan and focus on the good stuff so I felt really bad about how desperately I wanted Emery to get sacked. He seems like a lovely guy but the football was so uninspiring and ultimately boring, it made no sense that he was Wenger’s successor. A lot of the season felt like we simply had no plan in games and were just hoping for the best. Leaving the stadium feeling bitterly disappointed and frustrated was becoming too familiar. But I do think things will be much better next season.

On a more positive note, Mikel Arteta has been a breath of fresh air since becoming Head Coach in December, what have you made of his tenure so far?

I’m excited! It’s pretty clear that there’s still lots of work to do but overall it looks like he has a plan and a clear vision of what he wants us to be. I can’t wait to see what he can do with some fresh signings and a full season. We had a few games where our players' fitness under Arteta’s style of play was clearly an issue. It felt like they were all completely exhausted after about 60 minutes. Hopefully they’ve been spending lockdown on their treadmills and will be able to end games better when they can play again. It looks like he’s got some great ideas tactically as we saw against Man United in the 2-0 win, not allowing them to counter attack. And he looks great.

There’s a lot of talk about Pierre-Emerick Aubameyang leaving in the summer transfer window, how important is it for the club to keep him and how much of a blow would it be if he was to move on elsewhere?

He’s been carrying us for a while and it would be heartbreaking if he left but at this point, I wouldn’t be furious with him for leaving (unless he goes to a rival club). We haven’t been great and I can totally understand if he wants to be competing at a higher level. Something that Arsenal fans should always bear in mind is that we’ve had world class players leave us before and someone else world class tends to come along or other players step up. Losing your best player obviously isn’t ideal but we wouldn’t have Auba if Sanchez didn’t go. The record fee we paid for Pepe also gives me some hope that we could be spending big again.

As a fan looking in from the outside, what do you personally think needs to happen in order for the club to get back to the very top and compete against the best teams in the world?

Well we’ve got our manager, if he’s eventually gonna be the Guardiola + Wenger we’re hoping for, the priority has to be smart recruitment! Martinelli was a brilliant signing, Pepe hasn’t done as much as we hoped yet but I still think he’ll prove to be a great addition; more of those would be nice. If you look at the difference Van Dijk made to Liverpool, you can see how effective one or two great players in a good system can be. Let’s all just pray that some of these exciting Arsenal transfer rumours are true. We know we’ve had problems but we’re obviously still a huge club and we need to make our beautiful stadium a fortress.

Moving onto your career now. You've been fortunate enough to feature in the film Last Christmas and the TV series Sick Of It, both of which have been a big success. What was your experience like whilst filming was taking place for both titles? It must have been quite surreal to work with Emilia Clarke and Karl Pilkington?

I’m not a trained actor but I’m very lucky to get some amazing auditions and I should say that my acting roles so far have been tiny but I’m still very proud of them. ‘Sick of it’ was a really nice day’s work for me and Karl Pilkington is a lovely person to work and hang out with. Last Christmas was an incredibly surreal experience for me. It’s a huge feature film and I couldn’t believe how many people were working on it. I suddenly found myself casually chatting with Emma Thompson, Emilia Clarke, legendary director; Paul Feig. Everyone involved with the film was so unbelievably friendly, it put me at ease and made the whole experience really fun. It’s been nice to brag about. I really hope I can get more exciting acting work soon.

You do Stand up, Acting and Writing, what do you enjoy most? Do you have a favourite out of those roles or are they all just as enjoyable?

100% Stand up. It’s the best, most fun thing ever and I’m so glad I can actually make a living from it now (well before lockdown anyway). Acting is really fun and writing can be great but with Stand up, I’m doing whatever I want and I’m doing it my way. You get an instant reaction from an audience and every gig is different so you’re constantly having to focus and keep pushing yourself. I’ve done it for about 7 years now and have really felt myself grow and improve. I hope I can keep doing it forever. 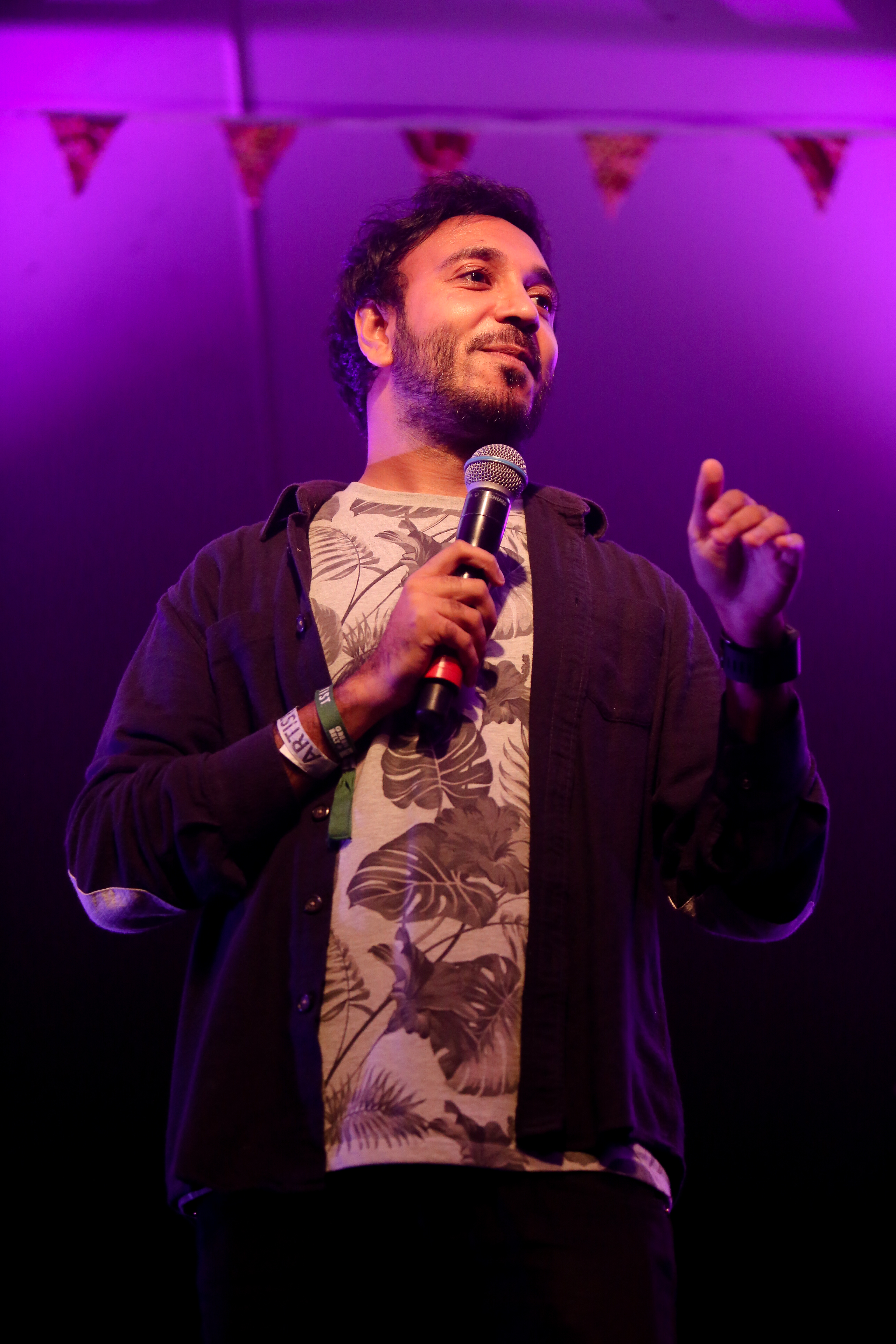 Bilal during one of his Stand up performances

You have taken 3 solo shows to Edinburgh and toured them around the UK as well, what is it like being able to travel around the country for your own tour? I imagine it may be a little daunting to begin with but can end up being very rewarding?

It’s really fun! Performing as part of a line up in a comedy club and doing about 20 minutes is one thing but going to a town or city with a themed show and audience that has just come to see you is completely different. There’s so much room to try stuff out and be creative. I also love travelling to places I’ve never been to before and Stand Up has made me realise how big and diverse Britain is. I usually do the show at the Edinburgh fringe for a month so it’s nice and ready for the tour. Of course it doesn’t always go perfectly but that’s just part of being a comedian.

Lastly, before we wrap up, are there any links you would like to leave below for those who may want to check out some of your work?

Yes! I luckily started making a web series just before lockdown and am releasing the episodes weekly. It’s a very silly spoof chat show type thing about acting and can be seen on YouTube; https://www.youtube.com/watch?v=32VFOPd6y78

I’m very proud of it and hope it can cheer people up in these strange times. I also will start streaming on Twitch soon; https://www.twitch.tv/zafarcakes

It was an absolute pleasure to interview Bilal and I thank him for taking the time to talk to me. I wish him all the best for the future! Be sure to check out his awesome work by clicking on the links above.

Thanks for reading, stay safe!