Injuries mount as Arsenal countered out of the Cup: behind the numbers

Let's break that down a bit. Maitland-Niles looked extremely sloppy in possession today, coughing the ball up 5 times, all in his own half. 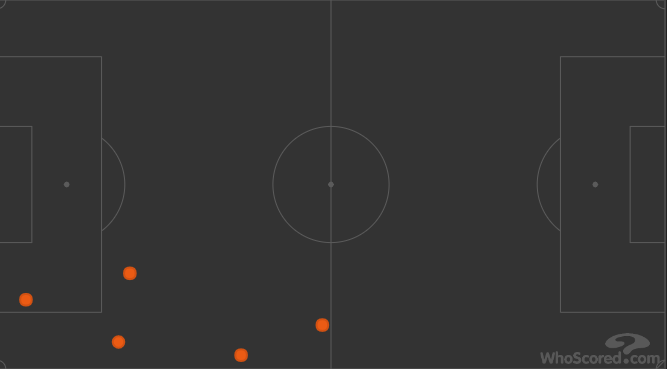 Those turnovers accounted for 21% of Arsenal’s total possession loss on the day, and 45% of the possessions lost in our own half.

United came with a clear strategy to tackle high up the pitch and put pressure on Arsenal’s wide areas: 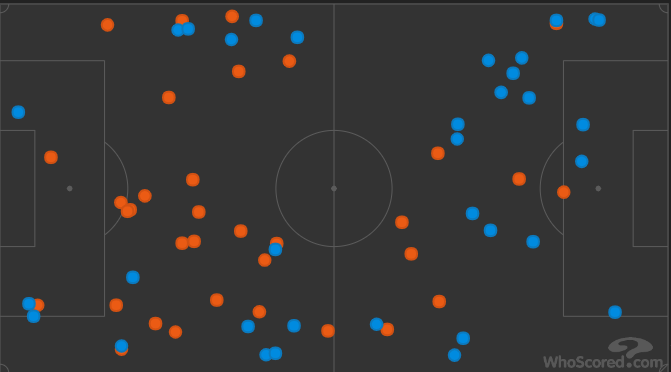 United also tried to shut down the wide play with 7 blocked passed in the Arsenal half with 5 of those in the wide areas.

What’s interesting is that we like to complain about turnovers and bad passes but ironically that tactic from United wasn’t what got them their three goals. 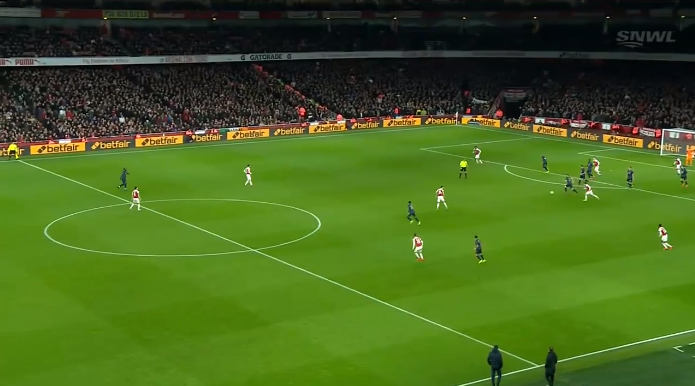 And the third goal started here:

As Emery said in his post-match, they knew that United was good in transitions and didn’t defend the transitions well enough.

I’ll also point out that Pogba, Alexis, and Lingard lost possession 6 times, each! And Arsenal didn’t score off any of those. Possession loss is frustrating for supporters to watch but it’s not always as important as we think.

7 - Number of successful dribbles by Man U

Dribbles are another weird stat that people like to talk about so let’s unpack this one a bit as well.

United won just 7/19 dribbles on the day. That’s a terrible dribble rate but hold on, let me show you where they won all of their dribbles: 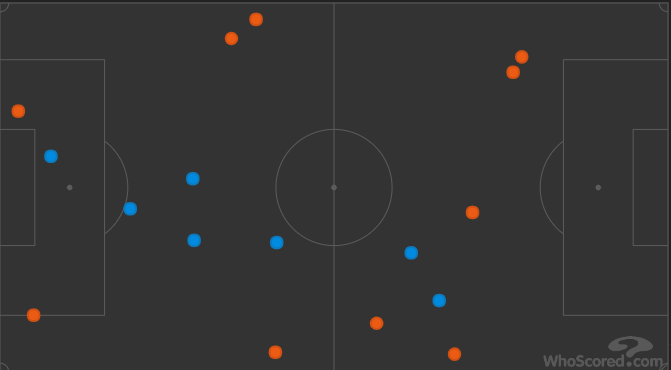 United is in blue and Arsenal’s goal is on the left. Five of United’s successful dribbles were straight down the middle of the park in Arsenal’s half. Two of those were by Alexis Sanchez (one for the goal he scored) and 1 of them was by Pogba (no goal). It’s not a good sign that we let them dribble through the middle like that and I think it indicates a weak midfield that didn’t do enough to stop them on the counter, but only one of those dribbles led directly to a goal or even a scoring chance.

What actually killed this match was the lack of transition defense, players positioned wrong, players not killing off counters with fouls or winning the ball back, and (for the first goal especially) very poor defensive coordination.

Go watch the first goal again - Koscielny and Mustafi both run at Lukaku, while Torreira is closing him down, while Kolasinac and Maitland-Niles stood in position to play Alexis on. 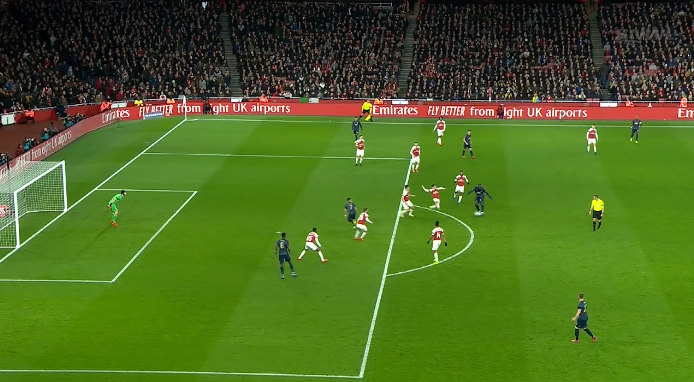 99 - Injuries for Arsenal this season

Using data from Transfermarkt.co.uk, I looked at injuries reported for the top six Premier League teams and Arsenal players have missed the most matches with injury this season with a total of 101 or just 99 if I subtract out Petr Cech’s 2 matches.

To be clear about my methodology: I went to transfermarkt.co.uk and for each team I looked at the “periods of absence” section. I only counted the red injury field with the red cross sign in it and not matches missed after. I didn’t count keepers, nor players who don’t play for their teams in the League (Jenkinson for Arsenal, Janssen for Spurs, van Ginkel for Chelsea, etc.) The logic there is that I don’t really think Jenkinson would have featured much this year in the Premier League, nor Janssen or van Ginkel).

But even excluding Jenko’s 8 match absence due to injury, Arsenal are still far and away the leaders of the top six in the Injury Table with 91. Below them are Spurs with 79, Man City with 64, Liverpool with 51, Man U with 43, and then Chelsea with an incredible… 4. FOUR.

Some notes on each team:

Arsenal’s injuries are mainly to the defense and especially the CBs. Arsenal have 5 CBs on that page and all of them have had injures. 17 for Mavropanos, 12 Koscielny, 8 Holding (so far), 1 for Sokratis (he missed more games but they aren’t listed as injured). In addition to that Arsenal have also had significant injuries to Kolasinac, Monreal, Bellerin, and Maitland-Niles, 24 total.

Most of Liverpool’s injuries are from Oxlade-Chamberlain. Not counting him, they only have had 27 missed matches due to injury.

Chelsea’s tiny number has to be down to the way that they report injuries, I think. Either that or they have the best medical team on the planet. This could also explain why Chelsea are so much more cohesive a unit than Arsenal.

I’m not saying my stats here are 100% correct, more information would be great, but I strongly encourage folks to have a look at Arsenal’s injury list this season. It’s a Douzi.