How Emery has Changed Arsenal (plus some more about xG): Behind the Numbers

Good day to you wherever you are, the international break is over and football is coming home. And by football I mean the good stuff, not that small beer they serve over at FIFA, I mean the drama that is the Premier League. And by coming home I mean North London, obviously. Though we do have to wait until Monday, which is irritating.

This interlull has been full of talk about “expected goals” and whether Arsenal are overperforming, which is a term that some people think really suggests that Arsenal are underperforming but getting “lucky.” As I stated on my personal blog and on the Arsecast, I’m not entirely worried yet. We’ve only played 8 matches so far and there is going to be a ton of variance at the start of the season and a lot of this “overperformance” is down to the fact that Arsenal are scoring goals from outside the box - which is a low percentage/low xG shot so when they score, they make the actual goals look a lot stronger than the xG.

Let me put this another way.

Arsenal have played 8 matches so far this season. Two have been against top opponents and the other six have been against teams outside the top 6. I looked at the xG (expected goals for) and xGA (expected goals against) for similar matches played against similar teams over the last three years and I understand why people are worried that the underlying stats don’t look great.

Before I show you come charts I need to tell you that in comparing like for like over the last three seasons, I removed the relegation sides. That’s because going back three years and trying to figure out who I should substitute in for Fulham, Newcastle, and Cardiff inserted too much variation. I can literally make these charts say whatever I want based on which team I pick to substitute in for those teams. So, we are only comparing teams which have played the last three years in the Premier League (or more).

Ok, so, that said, first off, expected goals against (goals we are expected to concede) is surprisingly up this season. 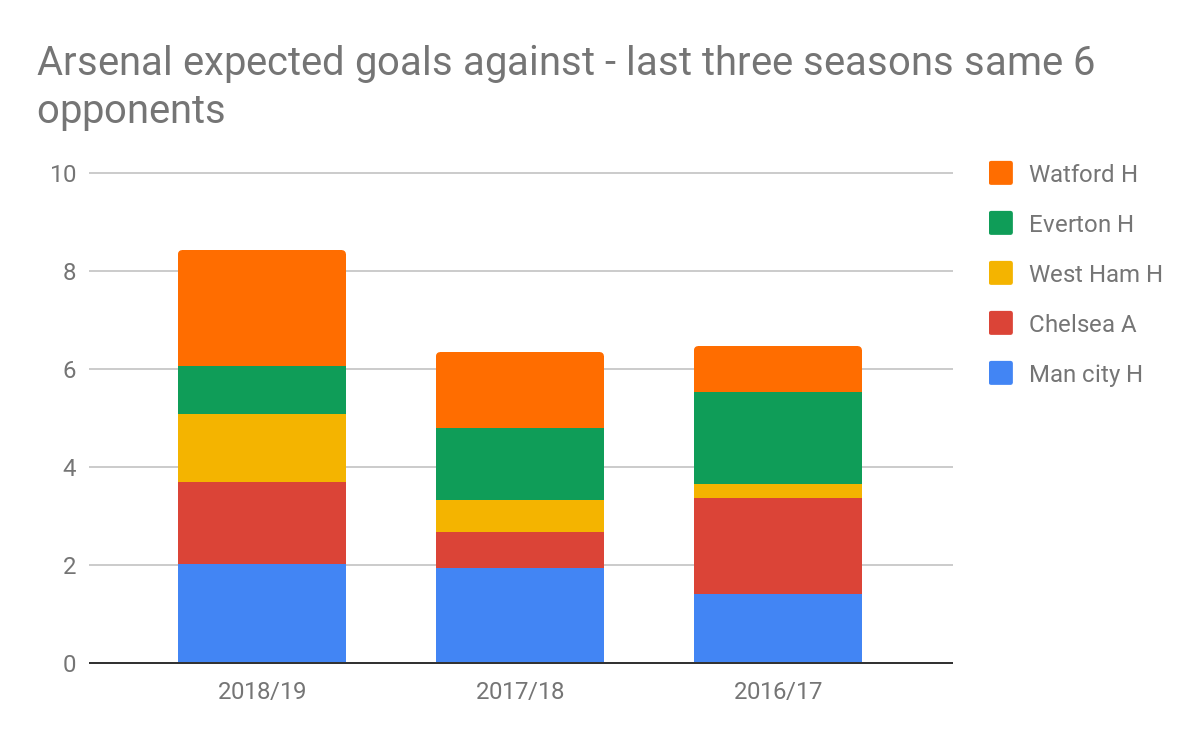 Arsenal’s total xGA for these 6 opponents this year is 8.44, up from last season’s 6.34 which was almost the same as the previous season’s 6.45. Most of this increase in Arsenal’s xGA is from Watford. They were expected to score 2.38 goals against Arsenal this season and “just” 1.55 last season. The rest of the increase comes from nominal gains by West Ham and Chelsea. 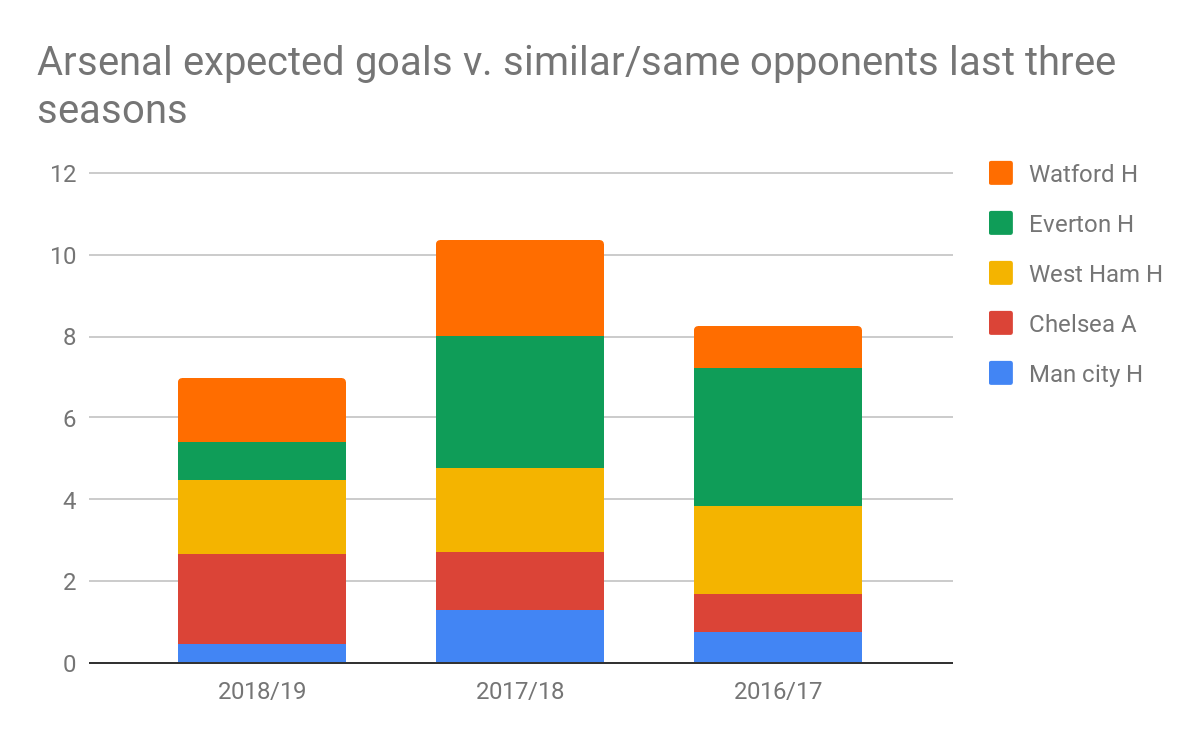 In terms of “overperformance”: against these six teams, in these six matches, Arsenal have only scored 2 more goals than expected and defensively have been better than average by 2.4 goals. Combining the offense and the defense, Arsenal have exceeded the averages by 4.44 goals. 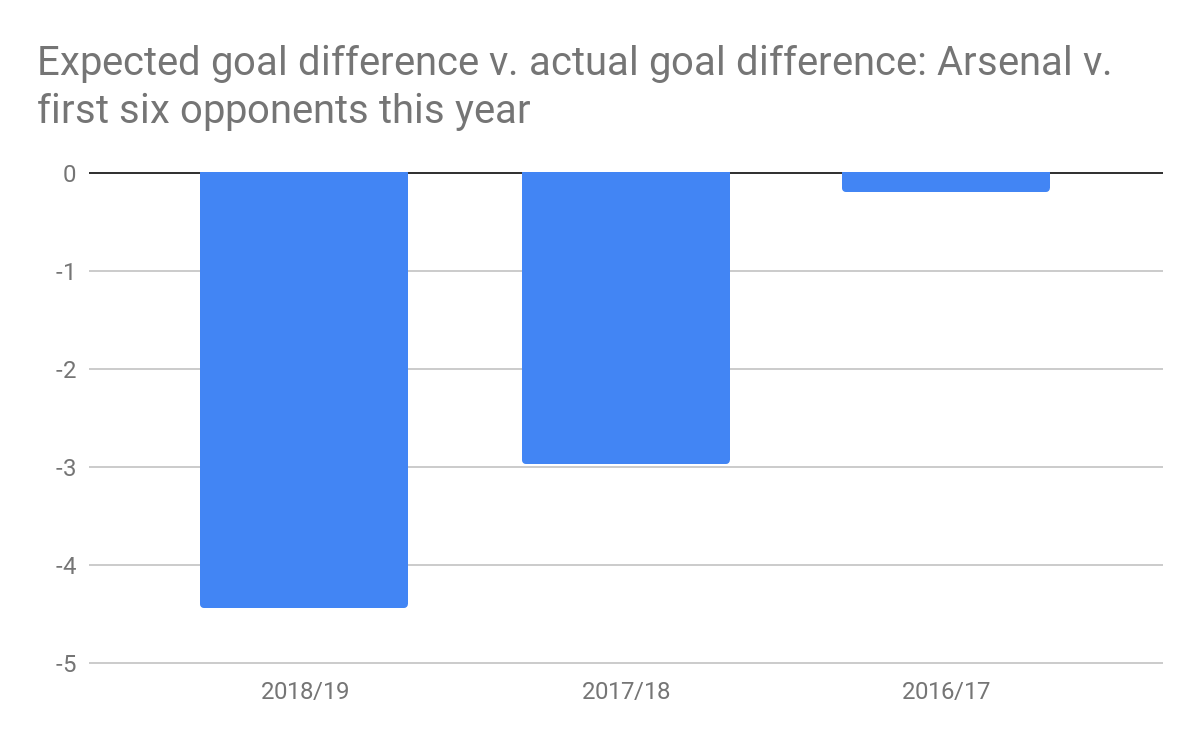 I get why these numbers look scary, we are close to Halloween, but we really need to see 10-15 games before we can start to get too excited or worried about the underlying stats.

The reason why Arsenal is “overperforming” xG is simple: overall shots taken are down so far from 15.6 last season to 12.1. Shots taken inside the 6 yard box are also way down from 1.1 to 0.6. Conversion on shots from outside the box are at one goal every other match (up from one in five) and the return on shots inside the 6 yard box is a paltry 1 goal (down from half a goal per game average over the last two seasons). Worse than all that, Arsenal are shooting a higher percentage of their shots from outside the 18 yard box, nearly 50% of our shots compared to 28% under Wenger. But overall, Arsenal are converting at a very high rate. Arsenal have scored on 10% of their shots outside the 18 yard box and 20% overall. In other words, we are taking fewer shots, the shots we are getting are in low percentage areas, but Arsenal are converting at a high rate.

However, Arsenal are dead last in shots from set pieces (2.0) and headers (1.3) - Arsenal were 8th and 18th in those categories last season. And Arsenal were 2nd in goals off headers last season, this year we have just the one.

In defense, Arsenal are 2nd in the League in total saves (34) and in saves inside the 6 yard box (4). On the one hand, that’s great for Cech/Leno but ultimately we don’t want to even concede shots there.

Interestingly, despite adding Torreira the Tiger and playing a double pivot, Arsenal’s total tackles numbers are down from last year. But the tackle win % is up from 63% to 68% and Arsenal are being dribbled fewer times per game, down from 9.6 in each of the last two years to 7.6 this year.

Interceptions are WAY down from the Wenger era. In 2015/16 Wenger’s Arsenal were 4th in the League in interceptions with 19.4 - 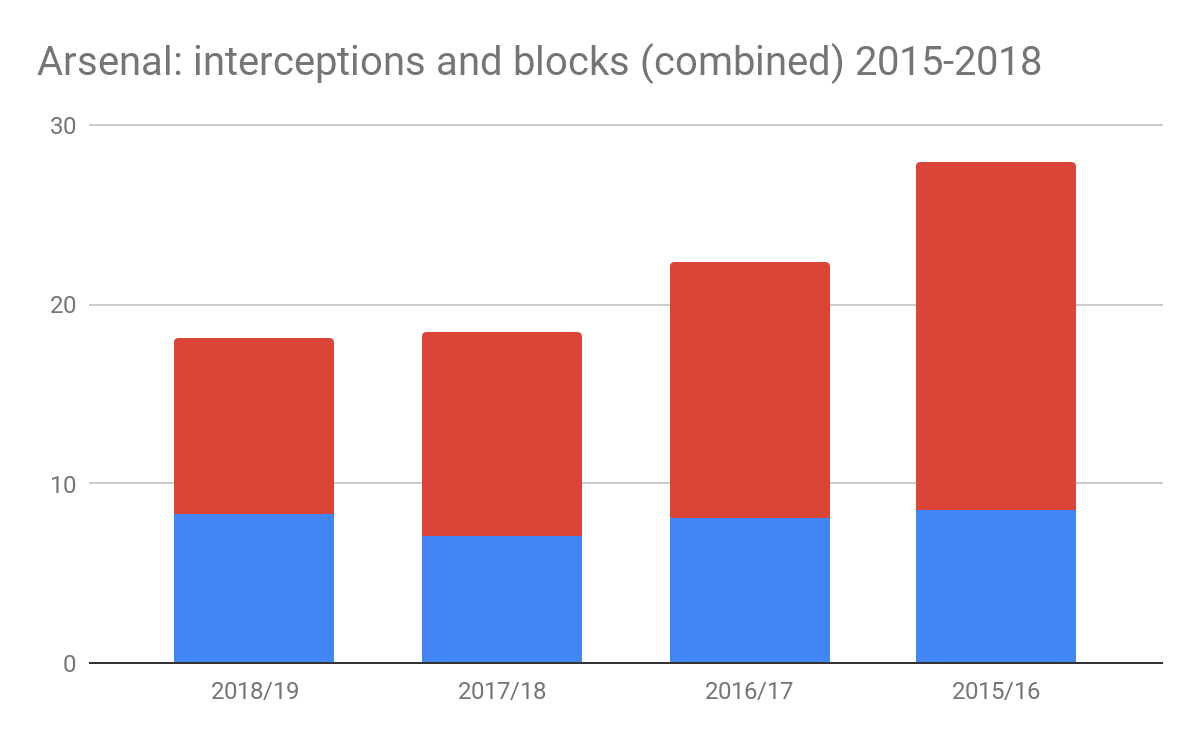 Arsenal’s interceptions were way higher back in that Wenger era because that was his defensive style. Despite routinely having 57% possession (the highest in the League in 15/16) Wenger’s team aggressively went after the ball out of possession and were 4th in the League in interceptions. Arsenal’s possession stats are relatively the same now as then. Possession is still 55%, passing is only down 25 attempts per match, but aggressively trying to intercept the ball is out.

That’s not really a problem though because (touch wood) Arsenal’s yellow fouls for haven’t changed and we haven’t picked up a red card yet.

The fouls number is very strange because Arsenal are attempting a LOT fewer dribbles per game: 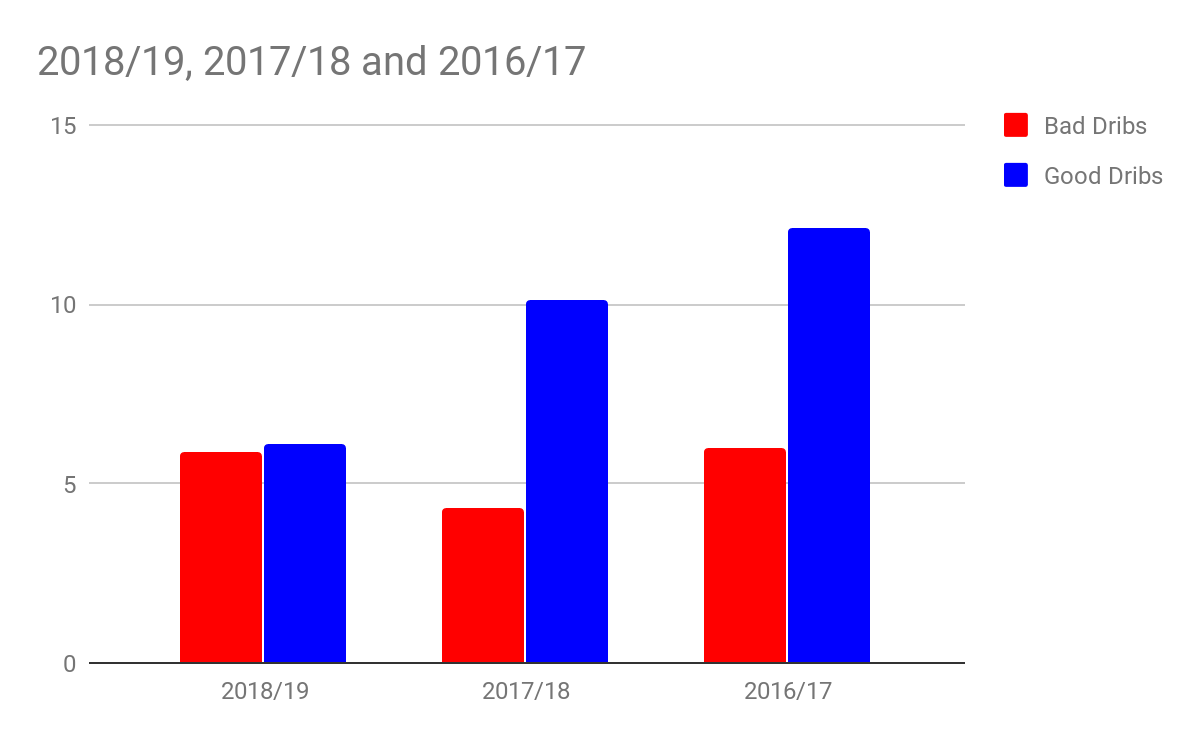 Arsenal have dropped from 18 attempted dribbles a match to just 12. We are attempting the same number of dribbles that we used to win two years ago. Part of that is certainly down to the “loss” of Alexis but it could also be a feature of Emery ball: maybe he wants passing over dribbling. To explain the increase in fouls I would have a guess that it’s because teams are pressuring us more. And the good news there is that Arsenal’s turnover rates are exactly the same as they were when we dribbled more and had that guy on the team who stood out there on the left and did little step overs before picking out a bad cross.

And finally, one last little change: long balls are slightly up. For 2016/17 and 17/18 Arsenal attempted 52 long passes per match, completing 50% of those passes. With Guendouzi and Xhaka both long-ball specialists, along with Mustafi (believe it or not), Arsenal’s long passes per game are up to 59 per game. We are still connecting on just 50% of these passes but we are attempting more 11% of our total attempts are long compared to 8.5% (each) over the previous two seasons.

I’m very interested to see how the team changes as we get everyone fit and Emery settles on a lineup. Koscielny was especially good at interceptions under Wenger (often leading the team) will he bring some of that attacking quality back? Koz was also a fantastic long ball player and a set piece threat. Two more dimensions that he can bring. And finally, how does Emery generate more shots in this team? We have already seen experiments with Ramsey in the middle, but Ozil is the best creative player on this roster and Iwobi is a budding young left forward who loves to drive at the opposition, he could raise the dribbles numbers.

Sorry this is so long! I’ll go ahead and end here, send questions if you have them.

Sources: It's basically all from Opta.