Where things have gone wrong for Ainsley Maitland Niles

Ainsley Maitland Niles made his first appearance for Arsenal way back in 2014 aged just 17 coming on as a substitute against Galatasaray (the game Aaron Ramsey scored that screamer), becoming Arsenal's second youngest player to make a Champions league appearance after Jack Wilshere.

2016/17: Maitland Niles was tipped by many to become a mainstay in Arsenal's midfield for years to come. After a successful loan spell at Ipswich, he came back to Arsenal and was initially used by Arsene Wenger as a holding midfielder. In our run-in to the FA Cup win in 2017, Ainsley put in a top notch display in our 5-0 win away to Southampton. What stood out at the time was his composure in the middle. Picking up the ball from the defense, being able to beat a press and effortlessly spreading the ball to either flank. Defensively, he did not put a foot wrong. It seemed like Arsenal had finally found a solution to our defensive midfield woes.

2017/18: Fast forward to 2017/18, Arsenal changed to a 3 at the back formation which gave us lesser need to have a holding player. Wenger played Xhaka and Ramsey in the middle and despite being run over on a few occasions, the extra cover at the back was able to limit damage and Arsenal were able to find a balance. Ainsley, whilst not being a starter in the league was a regular feature in cup competitions and continued impressing in the middle. In December, however Arsenal lost both Kolasinac and Monreal. This led to Ainsley being slotted in as an emergency left back.

He showed his prowess in adapting to a new position and proved to be a difficult customer for wingers to try and get past, with manager Arsene Wenger raving about his recovery pace on numerous occasions.

A few things changed in the beginning of next year. Firstly, our left backs recovered from injury. Next, Wenger shifted back to a 4 at the back formation. We played a 4-3-3 with Xhaka at the base, having Wilshere and Ramsey on the sides. It was a system that was based on total domination and control. As a result, Ainsley lost his place from the side.

When it became clear that winning the Europa League was the only way Arsenal could secure Champions League football, Wenger started shuffling with his selections for the Premier League. Xhaka, due to having phenomenal fitness levels, continued to play at the base of midfield in the 4-3-3.

Ainsley Maitland Niles played the box to box role and did very well. The game against Manchester United was the one that really made everyone's expectations of him sky rocket. He put in a man of the match display against a midfield which consisted of the likes of Matic and Pogba, winning possession 5 times, covering the second highest distance on the pitch and completing 36 of his 39 passes. 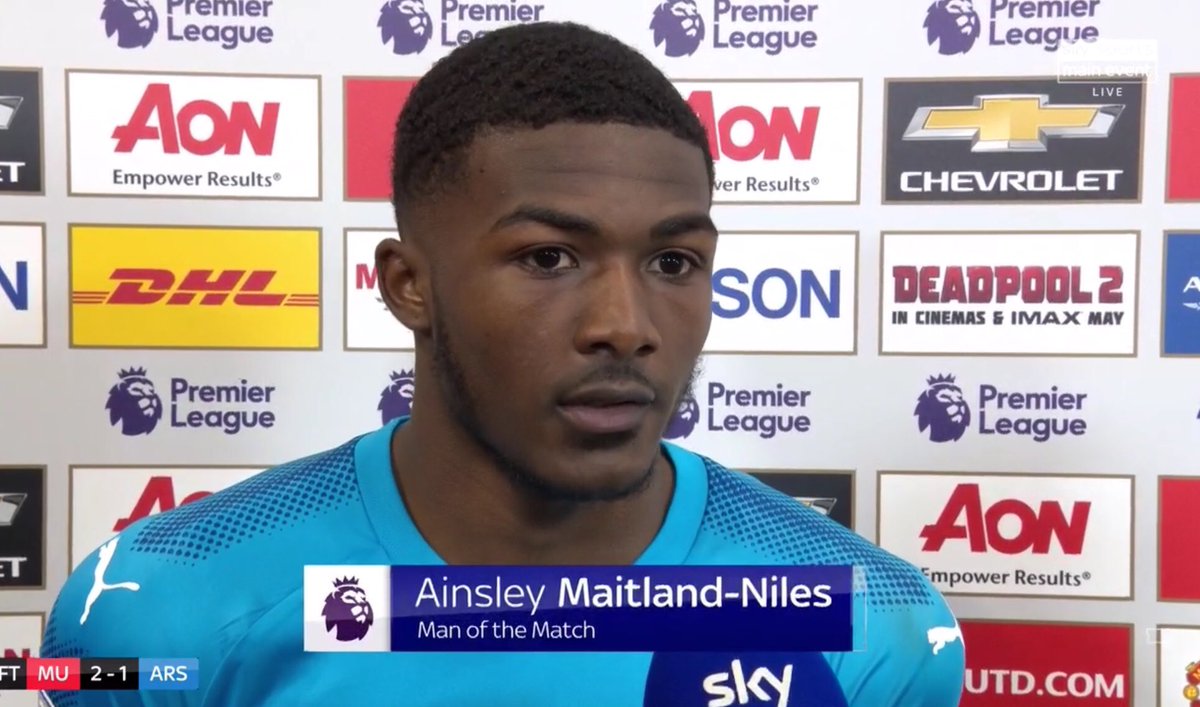 2018/19: This was the year of managerial change. Under Unai Emery, the player started as a utility left back due to injuries to Kolasinac and Monreal and never got the chance in the Premier League to play in central midfield under the Spaniard.

He played as a right winger when he scored at Anfield but that was just one game last season.

However, Ainsley thrived in the wing back role when Emery decided to shift to a back 3. It seemed like the perfect position for him, which could coalesce 2 of his biggest strengths - Gliding forward and recovery pace. And he made this position his own.

2019/20: This season, Emery switched once again to a back 4 and this is where Ainsley has struggled. He was made to stay high up the pitch, but also had huge defensive responsibility and in this kind of situation, having just recovery pace isn't sufficient. He isn't a natural full back, so it is quite unfair to expect him coping with tricky wingers like Deulofeu.

Ainsley then went on to say that he doesn't see right back as his position, but will do whatever it takes to help the team. After getting sent off against Aston Villa, Unai Emery replaced him with Calum Chambers.

Since then under Unai, he stopped getting chances in the Premier League and was only utilized in the odd cup match as a right winger where his performances were inconsistent.

Starting with Freddie Ljungberg and then under Mikel Arteta, he once again played as a right back, but this time had a lesser responsibility to go forward. He was able to cope well defensively, but it left Pepe isolated. Arteta even came out in public and said he isn't a right back.

Ainsley has lost his place at right back, not just to Bellerin, but also Sokratis. And this was before the club signed Cedric.

From the age of 17-22, this is a player that has played right back, left back, defensive midfield, box to box and right wing. It is far from ideal for a player wanting to develop. Sure, they can play in 2 positions to learn different aspects of the game, but 5 seems pretty ridiculous to me. There have been some questions raised about his attitude, but I think we need to be a bit empathetic considering what he has been through.

His immediate future at Arsenal looks grim considering the players we have in central midfield, coupled with the fact that we want to bring in a defensive midfielder as per The Athletic. So it begs the question - Where does Ainsley fit in? Now, Arsenal may not want to sell a versatile homegrown player on a modest wage. But would he want to stay put just being a utility player in cup competitions? I don't think so.

Ainsley is still young, just 22 years of age. The player has made it know on numerous occasions he wants to play in midfield. There are plenty of mid-table clubs that could do with a player like him. And a move away - whether it is on loan or permanent could act as a catalyst to revitalize his career.