Emery needs to fix the front four: Behind the Numbers

Arsenal take on Watford tomorrow at 7am (my time) and face a tough test. After six matches the Gunners are just one point below Watford on the Premier League table and before you think that’s a fluke both teams have almost identical expected goals for and against coming in to this match (though for slightly different reasons).

One other thing I noticed about Watford is that they have a big push in the second half of matches. Between the 46th and 75th minute in a match they have scored 8 of their 11 goals this season. Watford actually come out hard in the first 15 minutes of each half: their xG is 1.59 in the first 15 minutes of matches and 1.48 between the 46th and 60th minutes. Those are their peak xG times in matches so far this season.

Arsenal’s defensive record is weak in nearly every period of play.

The image above shows that Arsenal have conceded 2 goals in each every 15 minute period of play except the two surrounding the halftime break. There is also a slight dip in expected goals against in those periods as well. What’s surprising (to some) is that despite Emery bringing on Torreira in the second half to shore up the defense, Arsenal’s defenses are worse in the second half of matches than they first (3.38 total in the 1st, 3.95 in the 2nd) and Arsenal are most likely to concede in that second half, despite Torreira valiantly trying to head-tackle defenders. I’m worried about Watford scoring in that second half. They like a good blitz in that period and Arsenal look vulnerable to it.

In attack, at 1.28 xG per game this is the worst attack I’ve ever seen from Arsenal. Even last season, Arsenal averaged an xG of 1.9 per match and Wenger’s teams almost never dipped below 1.7. And the problem is that no matter how I slice the data, the system Unai Emery has deployed as Arsenal’s attack is simply not working. Every one of the front four players is performing at career lows in most metrics.

On the right, Mesut Ozil is clearly suffering. 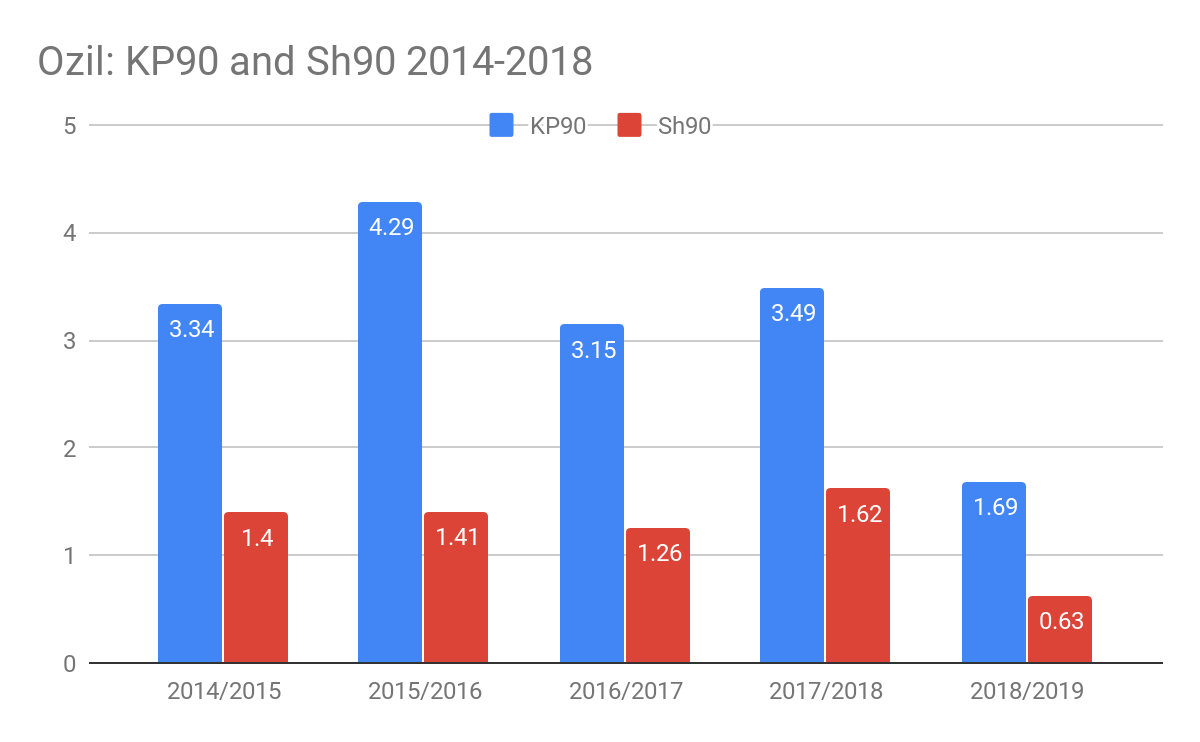 Ozil has gone from a player who created over 3.6 shots a game for his teammates (aka KP) over the last four seasons to one who is averaging 1.69 key passes per game. His shots are also less than half per game than his four year previous average. 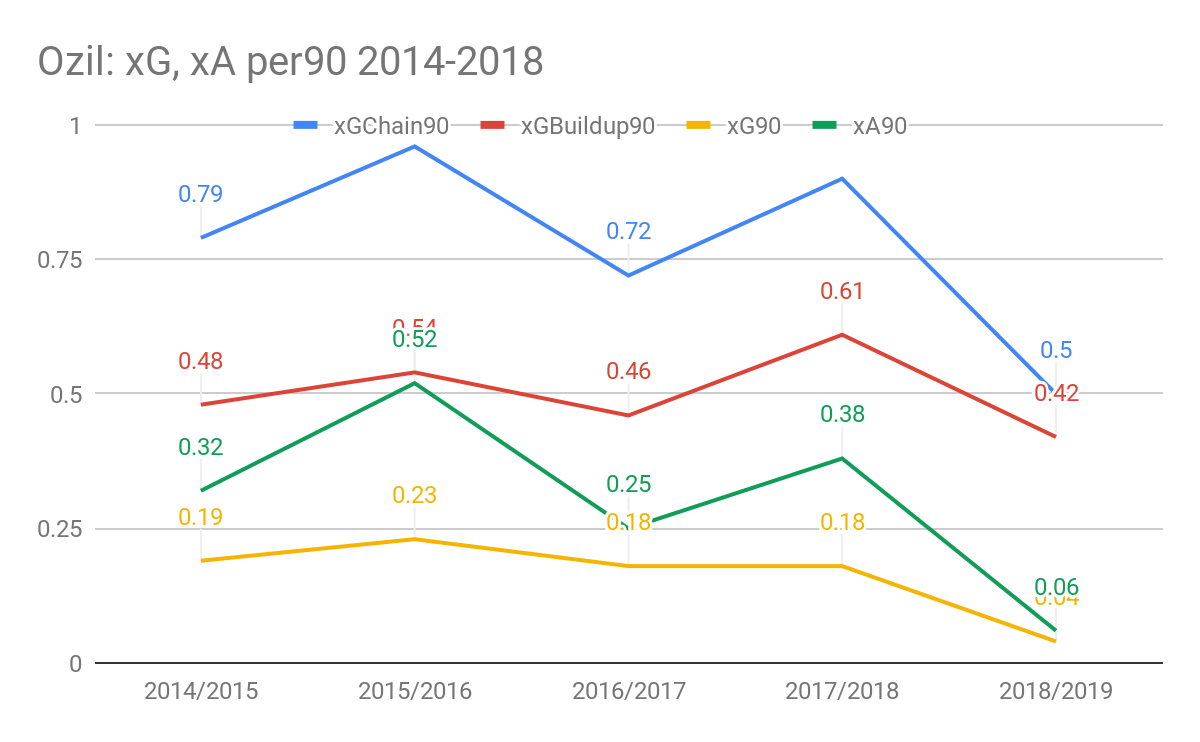 If Ozil was the only player suffering and the club were creating loads of chances then I don’t think anyone would be complaining but as it turns out no one is playing better than last season, not even Lacazette.

Ramsey’s stats are also all way down, with one exception, he’s creating more key passes for his teammates (the blue bar below). 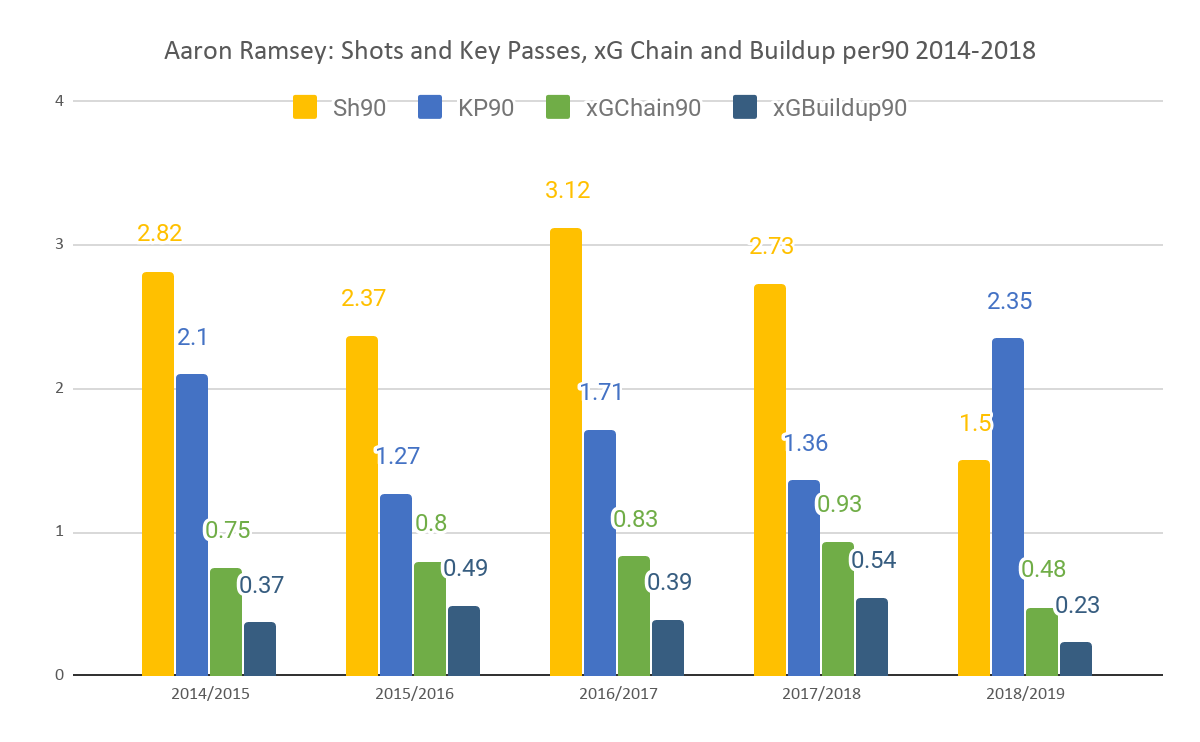 Ramsey’s strengths are in his buildup play (xGBuildup) and in getting involved in the final pass for the goal (xGChain) but both of those numbers are almost half of what they were last season. That’s why despite the increase in passes he’s making that result in a teammate’s shot, his expected assists per 90 are actually lower than they were last season (0.26 xA90 this season versus 0.29 xA90 last season).

The problem is that a lot of Arsenal’s buildup play is happening down the left and Aubameyang has never been a buildup player. Aubameyang’s xGBuildup per90 this season is a career low 0.05, that’s lower than Petr Cech this season (0.09), who should be the lowest on the club. Last season was a career high in that stat for Auba, with 0.2 per90. Auba is not normally involved in buildup play, so even that career low could normally be forgiven but his xGChain (his involvement in shots) is at a career low as well! Aubameyang is a player who had a touch in over 1 expected goal per game the last three seasons, that is now at 0.47.

And again, all of this would be fine if we were feeding Lacazette at a career rate. But… we aren’t.

There is a light at the end of this tunnel. First, Mkhitaryan has the highest xGChain90 of any Arsenal player (over 180 minutes) this season with 0.9. That means that when Mkhitaryan is on the pitch, we can expect him to be involved in almost a goal a game. Second, Iwobi has his limitations (he turns the ball over a lot and tries the same dribble-move over and over again) but he has the highest expected assists per90 on the team right now (with 0.93). It’s not brain surgery (or rocket science) to suggest that the front four that Emery has picked up to now isn’t working for anyone. Nor is it incredibly insightful of me to suggest that bringing Ozil into the middle (last season’s king of the final third pass) and playing Mkhitaryan wide right with Iwobi wide left with either Lacazette or Aubameyang up front would probably give the entire team more balance.

But however Emery does it, and I “trust the process”, the cold facts are that none of the front players are benefitting from this system.