Douzi's fouls, Auba's finishing, and Dean's pens: behind the numbers

Guendouzi is now the 6th ‘most fouled’ player in the Premier League having been hacked down 42 times. Since he’s only played 1376 minutes this season that’s a ‘was fouled’ rate of 2.7 per90, 5th in the League.

Matteo’s midfield partner, Lucas Torreira has him beat. Torreira has been fouled 52 times this season. That’s the third most fouls drawn of any player in the Premier League, behind Wilfred Zaha (59) and Eden Hazard (69).

Further evidence that this is a deliberate tactic: when you look at players who have high ‘was fouled’ numbers, they are typically players with high dribbles numbers. This is especially true at the very top - Hazard and Zaha are constantly running at opponents and getting fouled. But Torreira, in particular, is an oddball because he’s only attempted 14 dribbles this season and yet he’s been fouled 52 times. 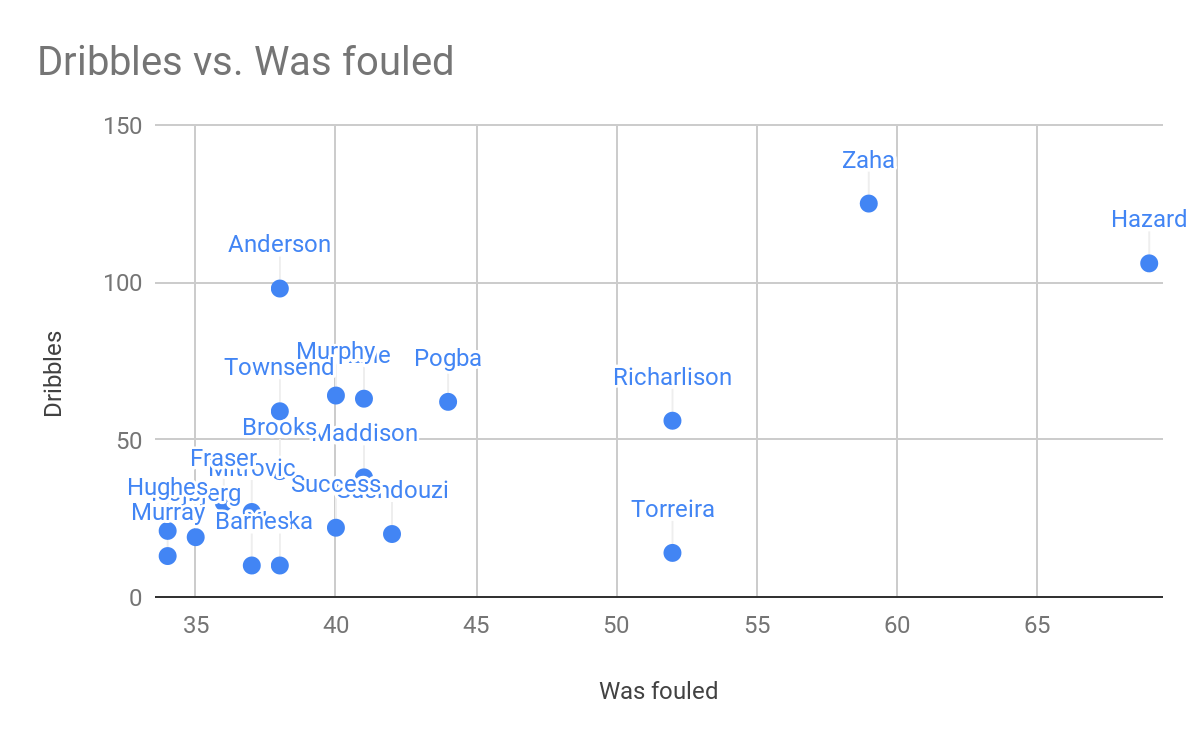 The reason they are fouling so often is that referees don’t call them and don’t card. Those three players (Torreira, Guendouzi, and Xhaka) combine for 2.5 dispossessed per game or 3.6 per90. I don’t think there’s much room for debate as to whether this is a deliberate tactic teams deploy against Arsenal. The only question is when will it stop?

Oh and you want to know something hilarious? Guendouzi has committed just 13 fouls this season and he’s got 5 yellow cards. He picked up his 5th yellow card against Cardiff without committing a single foul (it was for dissent). What I’d love to know is how many yellow cards the fouls on Guendouzi/Torreira/Xhaka have generated. I used to keep that data but I stopped a few years ago. I can see that arsenal have been shown 43 cards this season and the opponents have been shown 48 but I can’t tell where those fouls were committed and who generated the card.

Auba scored a penalty (his 2nd of the season) against Cardiff (they should have conceded 3 pens in this game) and I wanted to highlight something non-penalty oriented; his astonishing finishing. He’s had 60 non-penalty shots in League play this year and he’s scored 13 goals. That’s a finishing rate of 22% which is consistent with his finishing over the last three seasons. That’s a phenomenal finishing rate for any player but to give some context, Aguero is 11/72 (15%), Kane is 11/73 (15%), and Salah is 13/71 (18%) this season. Average finishing across all types of players and shots is about 10%. Strikers (good ones) typically start at 15% and go up from there but it’s very rare to see a player achieve 20% finishing over three seasons in three leagues. We are talking non-penalty finishing here and I’m counting goals in Premier League, Bundesliga, Champions League, and Europa League: since 2016/17, Pierre-Emerick Aubameyang has scored 74 goals on 320 shots for a finishing rate of 23%!

That number is even more wild when you see that he leads the League this year in missed big chances (17) and that over those same three seasons and same competitions, he’s missed a total of 79 big chances. I’ve been watching Auba for many years and I’ve never seen a player miss as many golden chances as he does. But as long as he’s scoring 23% who cares how many tap ins he misses?

Oh and since you will ask, Lacazette has 9 goals on 47 shots (19%) finishing. As I said earlier this season, I think it’s possible for these two players to get 40 goals (combined) but they are going to have to step it up! They need 16 goals in the last 14 matches.

.33 - Penalties per game awarded by Mike Dean over his career as a referee

Mike Dean’s record as a referee in Arsenal matches is kooky to say the least. Prior to this season, Dean awarded 3 penalties for Arsenal and 7 for their opponents. That’s 1 penalty every 6.4 matches, which is half the rate that he would normally award pens (one every 3 matches). Not only did he basically refuse to award pens to either side in Arsenal matches but he also downright didn’t give Arsenal a pen. Just three in 18 years of refereeing Arsenal matches. Three in 64 matches. Compared to the 16 he awarded Man U in 65, the 12 in 68 for Chelsea, the 11 in 66 for City, and the 11 in 65 for Tottenham, it’s fair to say that Mike Dean had a significantly unusual penalty record while refereeing Arsenal matches.

And now that Wenger has retired, Dean has refereed 4 matches and suddenly awarded 3 pens - two of them for Arsenal. Dean also awarded West Brom a pen in his last match during the Wenger era - it was a controversial penalty and that was the match in which Arsene Wenger finally just called Dean a cheat.

I am not saying that Dean cheated Arsenal for the last 18 years and that he didn’t award penalties that Arsenal absolutely deserved because he had some kind of burning hatred for Arsene Wenger. I wouldn’t say that because I don’t know anything about the two men apart from what I’ve read in the papers.