Cardiff 2-3 Arsenal: Behind the Numbers

5 - Goals from 5 Premier League starts for Lacazette (plus 2 assists). Aubameyang also has 5 goals and 1 assist in his last 7 League starts for Arsenal. Imagine getting both of these players starting on the pitch at the same time! Wait.. don’t imagine it, remember it! That handshake celebration between the two players and the way that they embraced each other after the match has the hallmarks of a special relationship. This is exciting work from Emery and deserves praise.

Something I noticed this season is that he looks like he’s more willing to take shots from outside than when I saw him play for Dortmund. It’s early, of course (I’m already tired of saying that), and this could just be an anomaly so we will have to track this across the season. But it’s a great development if true: you don’t always have to score from outside, just taking shots out there keeps your defenders honest, plus there are other factors like rebounds, spilled shots, deflections and other good reasons to take more shots. It’s also a departure from the Wenger era where Arsenal almost always were bottom of the “shots outside the box” table.

2 - Granit Xhaka is just two cards away from a yellow card accumulation suspension.

19 - Crosses by Cardiff, 2 of which led to a goal. As I detailed in my match preview, Cardiff love to get the crosses in, it’s their main threat offensively. In the first half, Arsenal allowed them to get in 12 crosses, 8 of which came from the Bellerin/Özil side (9 if we count the corner). Arsenal failed time and again to step out on those players and so they often had the freedom of the realm to put in crosses. Bellerin and Lacazette had the only two blocked crosses, both in the first half. With Cardiff it doesn’t actually matter that they find someone on the end of the cross. They crash crosses, leading to a scramble in offense and defense from which they hope to profit.

In the second half, however, Emery made an adjustment and Cardiff only had 7 crosses. I can’t quite tell from the stats what, exactly, Emery did to shut down the service to those players.

2 - Errors by Cech leading to a shot today. As we have said (too many times), Cech led the League in errors leading to a goal (6, he committed 7 errors last season) and Arsenal led the League in total errors committed with 32. And once again, Cech had 2 errors for shots in this match. That takes Arsenal’s total errors to six in just four opening matches. We haven’t had an error-free match yet. It doesn’t matter who the opponent is, if they press us, we crumble.

Arsenal and Fulham both lead the League in errors this season with 6. I can’t imagine that we continue on this pace for 38 matches (that would be a record 57 errors season) but I also don’t know what the ceiling is for this club with this manager. 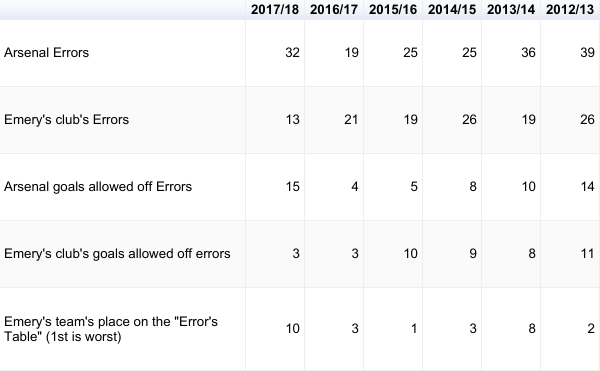 Last season with PSG was his least error-prone team so that’s a positive. However, he’s had three seasons of his last five where his team were near the top of the “Errors Table”.

When folks say “we have to give Emery time” what they mean is that this project to renovate the Arsenal defense is going to take at least a full season, if not two.

3 - Bad short passes by Cech this season. Cech completed yet another bad short pass today taking his season total to 3. That pass lead to a shot and Arsenal were lucky not to concede a goal.

Last season, Cech had just 3 bad short passes all season. In terms of percentages he’s “only” misplacing 4% of his short passes. Leno only misplaced less than 1% in each of his last two seasons but other top clubs with keepers who pass out of the back are similar to Cech right now: Ederson has 3 bad passes (of 69) for a 4% bad short pass rate and Alisson has 2 bad passes (of 63) for a 3% bad pass rate. Only Kepa has just 1 bad pass (of 65) for a less than 1% rate.

Emery will have seen Leno in training and will know his abilities. Calls for Cech to be dropped seem reasonable right now (because we aren’t used to seeing this from our keepers) but I wonder if Emery (while not happy with misplaced passes) isn’t seeing this slightly more rationally at the moment? I can’t really say. I’m just offering you a reason why Unai might not drop his number 1 just yet.

8 - Not counting penalties and own goals, Arsenal have the second worst goals conceded record in the League with 8. Of course, at this point you’re going to say “yah, but” and you’d be right: we did play Man City and Chelsea. And I’d be right to say that we also played West Ham and Cardiff and in those two matches we conceded 27 total shots. Let’s just break out some depressing numbers, which continue to show the task ahead for Unai:

7.3 - Torreira earned a 7.3 rating from WhoScored.com this week and that is a rarely high rating from a substitute. Why did he rate so high?