Behind the Numbers: can Arsenal have two 20 goal strikers next season?

One thing I am looking forward to is how Emery gets both Lacazette and Aubameyang 20 goals in the Premier League this season. Typically in order to get a striker 20 goals, they need to get 100 shots. That would seem a tall order, to get two players 200 shots on a team that only created 594 total shots last season, 76 less than Man City.

The great news is that Arsenal’s top shooters last season were Alexis Sanchez with 69 shots, Lacazette with 68, and Granit Xhaka with 66. Alexis and Granit combined to score just 8 goals off those 135 shots. A pitiful 6% finishing rate combined.

Xhaka is never going to score many goals taking shots from outside the box. A world class return on those shots is 6%. That would be 4 goals off 66 shots. But Alexis was equally poor for Arsenal last season, playing as a sort of striker but finishing like a midfielder, with just 10% finishing.

The great news for Arsenal is that Granit can keep taking shots from outside the box and all Arsenal have to do is get Aubameyang to take the shots that Alexis was taking and you’ve automatically improved the team.

I’m being a bit flippant but I do think that losing Alexis and picking up a killer striker like Aubameyang is exactly what Arsenal needed. Let’s look at just one stat to see what I mean: shots and goals from open play over the last two seasons.

If I look at Aubameyang, Lacazette, and Alexis’ total shots numbers (in domestic leagues and european leagues) from open play - this excludes pens, direct free kicks, corners, set plays, and counter attacks - a clear picture emerges of how much better both Auba and Laca are as finishers than Alexis.

In open play both Aubameyang and Lacazette finished a whopping 25% of their shots over the last two seasons. When you hear people talk about “clinical finishing” they usually mean that a striker puts away chances that the fan thinks the player should score. When you hear me talk about “clinical finishing” I mean that a player puts away 25% of his chances from open play.

Lacazette and Aubameyang are clinical finishers. Will they score every chance? Nope. But they have both been finishing chances at a high rate for several years now and unless something happens to undermine their confidence, there’s no reason why that can’t continue.

That is fantastic news for Arsenal, Arsenal supporters and Unai Emery. Over the last two seasons, Alexis took 176 shots in open play (in both League play and Europe) and scored just 27 goals.

Auba and Lacazette’s 25% finishing from open play is a bit high but not astronomically so for them: even over their entire careers both players have been 18% and 19% finishers from open play. If Emery can shift just Alexis’ shooting and a few shots from some of the other departed players (Giroud), I think we can see a clear picture of how many shots each player will get.

Let’s do some pretty simple math and make a prediction. First, we are only looking at Premier League and not including penalties, which I assume Lacazette will take. And second, I don’t think it’s weird to assume that there will be games which Auba starts and Laca comes on (and vice-versa) or even games where both players start the game at the same time.

Assume that Aubameyang gets Alexis’ minutes, his minutes this season: 2566

Assume that Lacazette gets Giroud’s minutes, his minutes this season: 2587

Aubameyang’s minutes per shot over the last two years: 26

Aubameyang’s minutes per shot in the pre-season: 37.5

Lacazette’s minutes per shot over the last two years: 33

Lacazette’s minutes per shot in pre-season: 34

Estimate of number of shots for Aubameyang next season: 80

Estimate of number of shot for Lacazette next season: 80

Non-penalty goals estimate for Aubameyang at Arsenal next season: 20

Non-penalty goals estimate for Lacazette at Arsenal next season: 17

Increase in non-penalty goals for Arsenal in the Premier League: 6

There are a lot of “ifs” in there: if they each play 2500 minutes, if they continue shooting at their historical rate per minute (it looks like Aubameyang might suffer here, if pre-season is any indication), if they continue scoring at their historical finishing percentages, and one more that I don’t mention which is “if they can both get the kind of shots that they like.”

Alexis got a lot of shots, but he also took shots from outside the box. Both Lacazette and Aubameyang have a similar distribution of shots: about 12% in the 6, 12% outside the box and the remaining 76% in the 18 yard box. If we look at where Alexis and Giroud took their shots last year, there is a deficit of shots that Arsenal need to make up in order to get Lacazette and Aubameyang the shots they need to be successful. 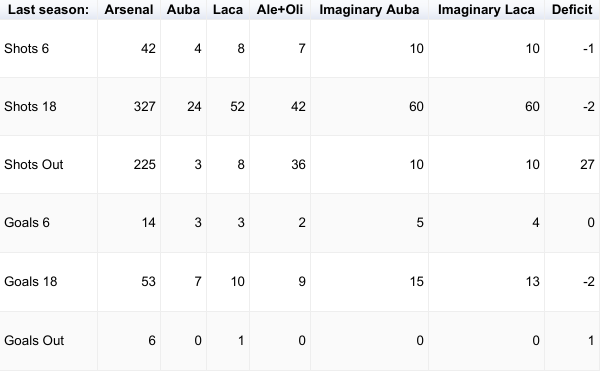