We often look at how many passes a team creates for themselves as a sign of playing style. For example, we know that Man City and Chelsea want to control possession and when we look at the stats we can see that they lead the League in short passes per game (641 and 668) and are dead last in long balls per game (47 each).

But on the flip side of that, by looking at passes allowed per game, we can see how a team structures their defense (or doesn’t). For example, overall (home and away) Man City, Chelsea, Tottenham and Arsenal allowed their opponents to take the fewest short passes per game. This shows how much these teams want to control the flow of the game. But one thing that struck me is that Liverpool are 12th in the League in short passes allowed.

Those crosses allowed numbers are a bit of a surprise. Liverpool aren't blocking an extraordinary number of crosses, what they are doing is simply not allowing teams to cross. This comes through a combination of high pressing (when they lose the ball) and sitting back if they don’t win the ball right away. Arsenal are lowest in the league in accurate crosses per game with 3 and lowest in key passes off crosses with just 1.5 per game, but 2nd in the League in assists off crosses (0.4). Crosses are one of Arsenal’s most dangerous passes but they apparently don’t need a whole lot of crosses to score.

Liverpool are also known as a pressing team and so you might expect that their tackles, interceptions, and blocks numbers would go up in away matches and there is a slight increase but nothing dramatic. They are 17th in interceptions away (9) and 18th in interceptions at home (8). They attempt 23 tackles at home and 26 tackles away. They block 8.4 passes per game away, and 7.8 per game at home. Overall in these aggressive stats, their numbers rise slightly by just over 3 per game.

Arsenal also have the ignominy of leading the league in saves at home with 23 (total, not per game). That’s technically tied with Man U but I give the edge to United because Arsenal have had to make 4 saves inside the 6 yard box at home, the most in the League, while United have only 2.

Arsenal’s home games this season have been a dog fight and that shows up in the expected goals numbers: 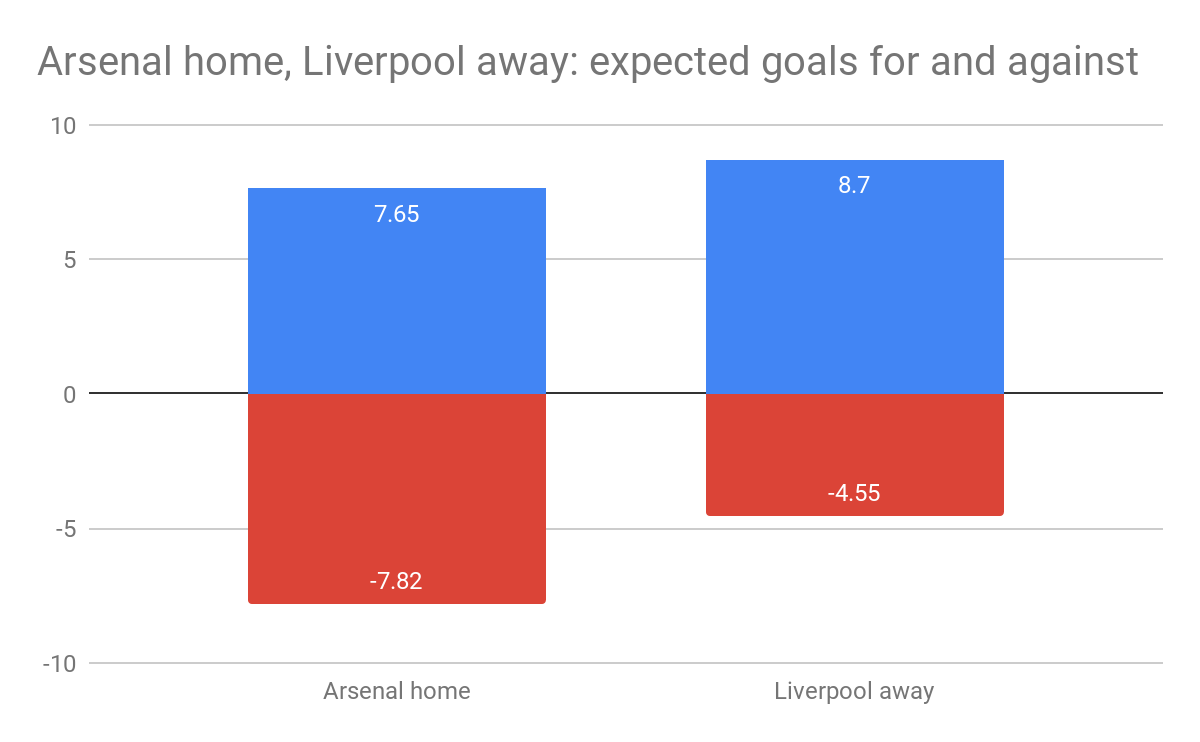 The Gunners have the third worst non-penalty expected goals against (NPxGa) at home with 7.82. That sounds terrible, until you look at the company. Worst is Burnley (9.09), 2nd is Tottenham (7.83) and 4th is United and 5th is Chelsea.

Burnley I fully expect to top all lists for worst xGa. They allow teams to just take shots. They did that last season and got away with it because they blocked so many chances. Arsenal this season haven’t yet found a way to control games and stop opponents from shooting and not only that but they are allowing teams to get shots on target. However, they aren’t conceding goals because they are saving the chances. Man U last season “overperformed” xGa and “should” have conceded more goals than they did, but like Arsenal this season, their keeper kept them in it. But I have to admit I didn’t expect to see Tottenham and Chelsea up there with Arsenal, United, and Burnley. They are well known as possession-based defensive teams and last season were 3rd best (Tottenham 14 NPxGA) and 4th best (15 NPxGA) in home matches. Just to illustrate how bad their defenses have been this year, Tottenham conceded 0.77 NPxG per game last season and are conceding 1.96 per game this season. Chelsea were 0.80 NPxG last season and are 1.48 this season.  . It’s too early in the season to draw any conclusions from any of this data, other than to say that maybe all of the top teams are being pressured at home?

In terms of actual goals allowed and scored this should be a tight match: 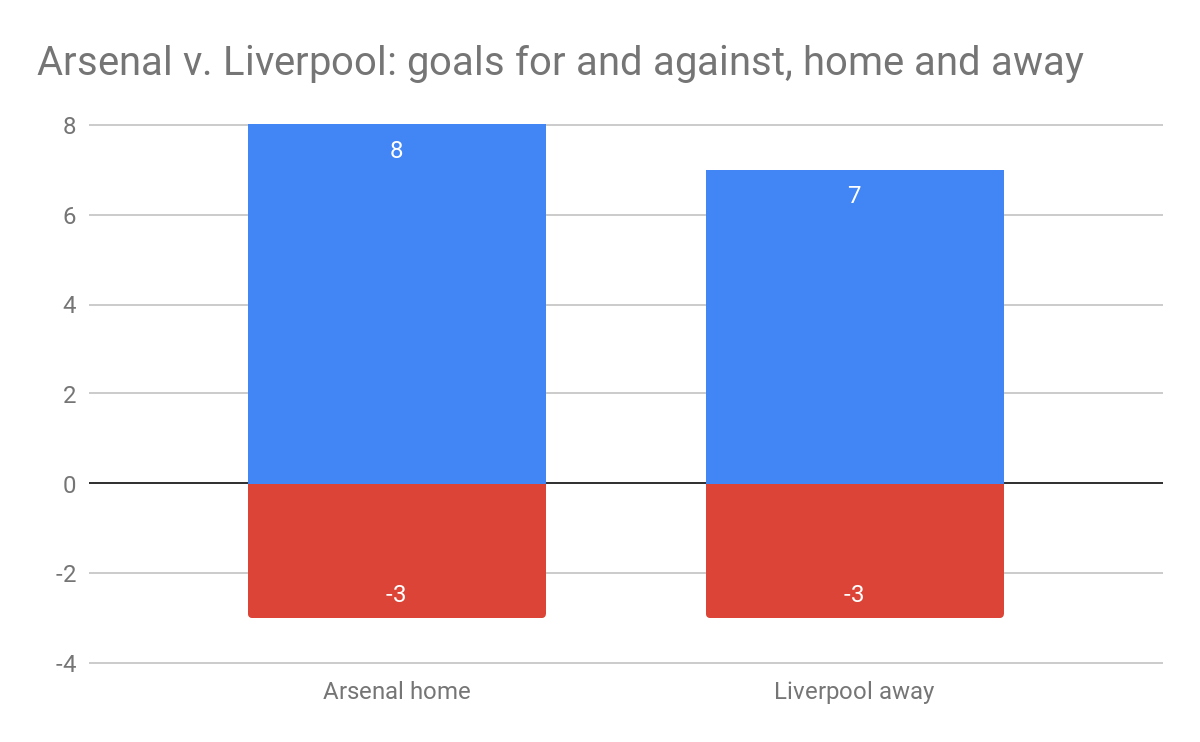 These numbers might look a bit funny to you but that just because I removed the own goals and pens both for and against. Arsenal may be conceding a lot of shots and a lot of shots on target but because they are saving at such a high rate they are not conceding goals. Leno, in particular, has been off the hook, saving 6/7 shots on target. 4 of those inside the 18 and 1 in the 6.

One last thing to watch out for: Liverpool are 2nd in the League in goals scored in the first 45 minutes, with 12. Meanwhile Arsenal are tops in the League in goals in the 2nd half with 18. It’s not a revelation to suggest that Liverpool will almost certainly attack Arsenal early and the Gunners will almost certainly respond in the 2nd half. Arsenal have scored 18 of their 24 goals this season in the 2nd halfs of matches, 75%. And at home it’s 8/10 (80%). In the first 30 minutes of games, Liverpool have 7 goals and Arsenal have 3. I know that a lot of folks want to see Arsenal come out strong in the first half, but I wonder if Emery would rather that the team not give away good chances in the first half and play much more defensively?