Arsenal are the most fouled team in the League, why? Behind the Numbers

Arsenal have suffered 333 fouls so far this season the most of any team in the Premier League. I am only counting the official fouls committed and recorded against Arsenal, not the number of fouls we think that should have been called. That number would be astronomical. 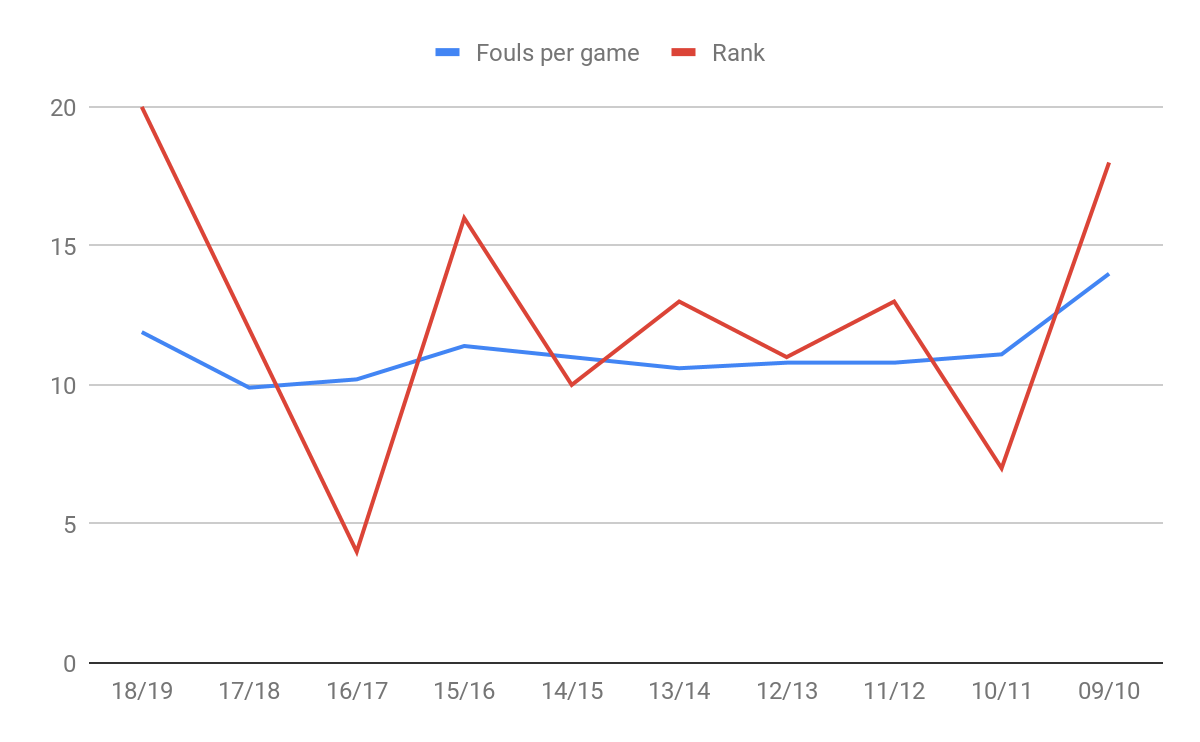 I also tried to find a correlation between fouls and some other statistic and could not. I looked at overall shots, possession, passes, failed possessions, and even odd things like errors, dribbles (successful and failed), and shots taken, and so far I can’t find a fit that I am comfortable with. That doesn’t mean that there will never be a correlation or that one doesn’t exist, rather that I can’t find it.

Without a nice scatter plot to comfort me, what I suspect is going on with fouls is that they are too dependent on perception. And I mean perception from a lot of different angles.

The first is the perception of the referee. If you’ve watched football for more than two weeks you’ll know that there is no such thing as an absolute foul. Harry Kane was caught headbutting players against Chelsea on Wednesday, the FA did nothing to him because the ref saw it and didn’t think it was a foul. King stamped on Koscielny and there wasn’t even a call. Guendouzi was fouled in the buildup to Bournemouth’s goal and the ref decided it wasn’t a foul.

The second reason why a team might get more or less fouls is the perception of the opposition manager. Is this team considered a “light touch”? Maybe you send the boys out to “get tight with them” and “see if they like it up em.”

Opposition managers also might want to press a team who like to play out from the back. It just makes sense to “get tight” to a team who are trying to advance the ball through the midfield. Turnovers in those areas can be fruitful and the referees might be less inclined to give yellow cards when teams are fouling in buildup than in the final phase of attack. After all, it looks much more like a team is trying to “stop an attack” if they foul a winger driving at the box than if they foul a DM trying to get the ball forward.

Again, though, that’s not what’s going on at Arsenal. Arsenal’s opponents have been shown 54 yellow cards this season. Which isn’t number one in the League but then again there isn’t a great fit between number of card points and number of fouls. And the more I think about it, the more that makes sense. Every third foul isn’t a card. Cards can and should be awarded on the first foul. So, total number of fouls should correlate very weakly to cards and that’s what we see.

However, the thing I keep thinking back to is how Arsenal are doing two things: we are building from the back and we are and have been an error-prone team for a long time.

If you’ve been following me for any amount of time you know that I’ve written about Arsenal’s problems with individual errors for goals and shots before. Last season Arsenal topped the League with 33 total errors, 15 of which were converted into goals. This continues a trend from many years where Arsenal were prone to mistakes: 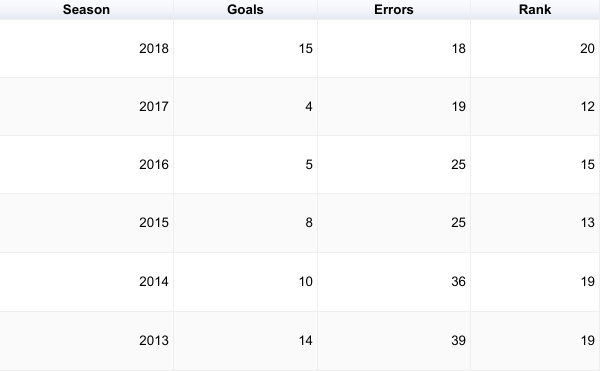 In this chart “rank” means how bad they were. 20th would be the worst team in the League, or the team conceding the most. As you can see, Arsenal were quite rank last season. Much rank.

Six (6) of those goals last season were given up by Cech and he has since been demoted. But Xhaka had 3 goals scored off his errors and Mustafi had 2. Teams will be keenly aware that Arsenal’s midfield and center backs are a potential source of joy and will press accordingly.

That’s exactly what we are seeing this year. 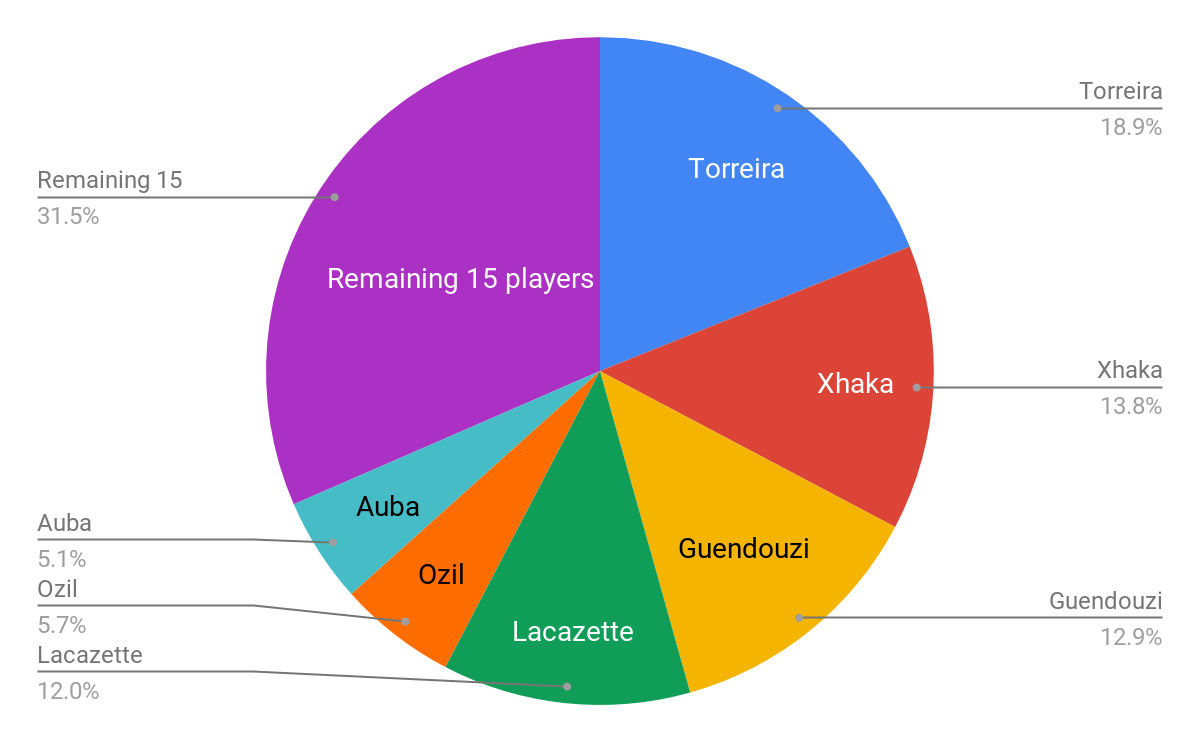 Incredibly, Torreira, Xhaka, and Guendouzi have almost half (152/333, 45.6%) of Arsenal’s total fouls. Those three players have been fouled 5.4 times per game this season. Where most other teams have their forwards fouled, Arsenal are having their DMs fouled.

The problem is that this tactic still kinda works. Xhaka has given up two goals off errors and Guendouzi was judged to have given up a goal off an error against Bournemouth. Those two players have also given up two additional shots (that weren’t converted into goals) and Torreira has also been caught twice.

This tactic by opponents is frustrating to watch. I think most of us would like it if the referees called these games tighter and didn’t let the opposition get away with pushing us around. But as long as Emery wants to play out from the back and as long as Arsenal have players who get caught in possession in spaces which can turn into goals very quickly. Arsenal’s opponents are going to have a go at them.