Arsenal 4-2 Vorskla: Behind the Numbers

One thing I noticed at the end of the match against Newcastle was that Petr Cech resorted to kicking it long on almost every possession. He’d kick it long, Newcastle would head the ball back at us, Torreira would have to fight someone bigger than him in a dark alley to try to win the ball back. Three times this tactic led to a dangerous possession, shot, and eventually to their goal.

131 - Passes by Arsenal v. Newcastle in the final 30 minutes

The final 10 minutes versus Newcastle were even worse. Cech has just 5 passes, all of them are kicked past the half-way line, he completes just 1 pass. Xhaka only completes 60% of his passes in that final 10 minutes (3 of 5), Bellerin 6/8, Mkhitaryan 6/9, and Ozil 2 of 3. Arsenal were up 2 to nil, should have been in cruise control, but instead of passing the ball around and keeping Newcastle from having possession they just kicked it out.

The final 15 against Vorskla was totally different. Guendouzi completed 27/28 passes, Elneny 12/12, Ozil 20/21, Licht 13/13. The problem here wasn’t keeping possession, it was 1) The Lich was dispossessed for a goal and 2) the Guendouzi/Elneny center midfield partnership was out of position (Guen) and let Sharpar run right past them (Elneny) for an open shot.

Remember when we used to write about how many turnovers Alexis had? It was like a thing that people were obsessed about. I noticed yesterday that Iwobi was praised for his play so much that people think he should start. I also noticed that he had 9 turnovers.

Attacking players often lose the ball, it’s normal: Firmino averages 6 per game, Salah 5, Zaha 10.3 per game, Sterling 6.6, etc. You don’t want to see a player turning the ball over 9 times a game and having 11 bad passes, but at the same time, if the rest of the team passes at 90% rate and as long as the player doesn’t try to dribble out of the back it should be ok to have a lot of turnovers when you have a ton of the ball in the final third. Which is what Arsenal did last night.

No one playing on the right in attack

Once again we saw the right back position exposed to counters when Arsenal turned the ball over in attack. This is because Arsenal have a left-side attacking bias. Here is the touch-map of all of Arsenal’s players (minus the fullbacks) for the first 60 minutes against Vorskla: 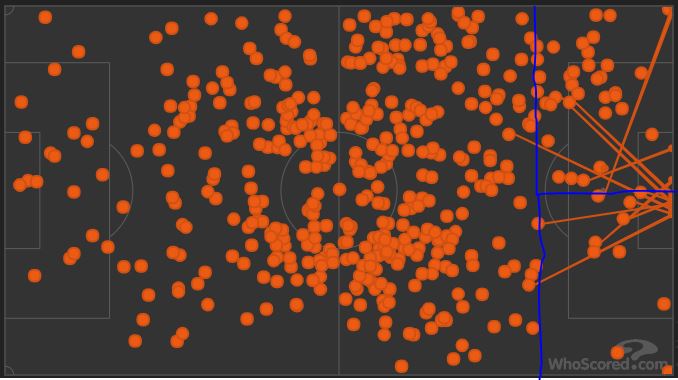 In this image Arsenal are attacking left to right. I have divided the attack into two sections, the top corresponds to the Monreal side of the attack and the bottom the Lichtsteiner side. I removed the fullback’s touches so that we can see what their teammates are doing, not the work that they are doing.

In attack Arsenal had almost no touches on the right and a huge number on the left. Why does this matter? Because it’s a major reason why the right back position is exposed time and again, regardless of who is playing there and how well they “sit back”. All of the players are drifting left in attack.

The exact same pattern appears when Emery brings Ozil on. Here’s the touch map against Vorskla in the final 30 minutes. 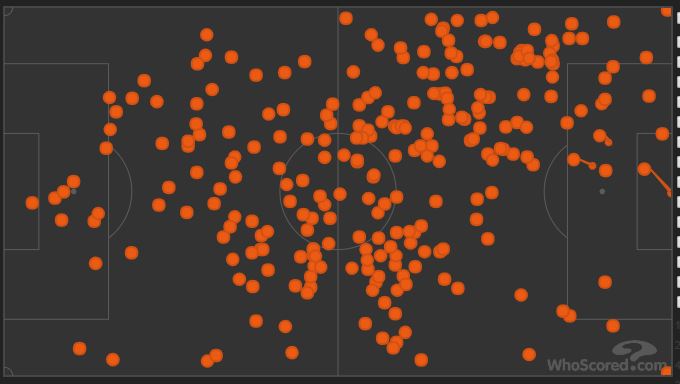 And lest you think this is a one off, this is the touch map against Newcastle for the first 60 minutes (this time attacking right to left): 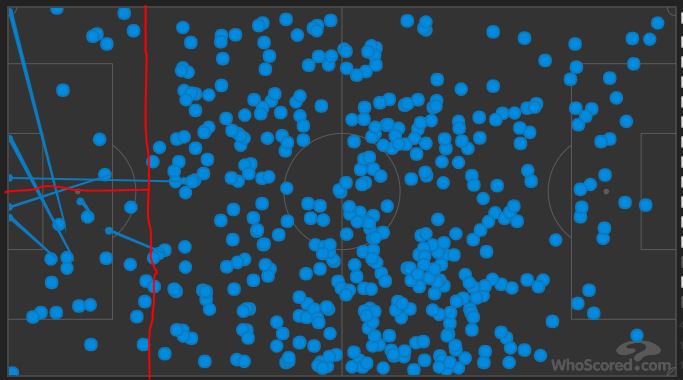 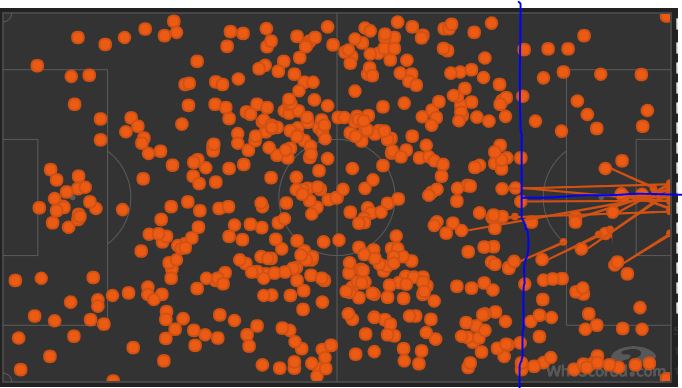 Ozil didn’t play in that match.

It’s probably too early to tell but it looks like Ozil tends to be a magnet for his teammates. The further left he tends to play, the more left the rest of the team wants to play. Getting this balance right, both in attack and defense, is one of the most important things that Emery can do this season.

Sources: Whoscored.com for the touchmaps and other stats