Arsenal 4-2 Bottlers: Behind the Numbers

Harold Kane, “the most complete footballer in England”

24 - Touches by Harold Kane in 90 minutes of football

4 - Successful passes by Lucas Moura, the fewest passes by any player in the match 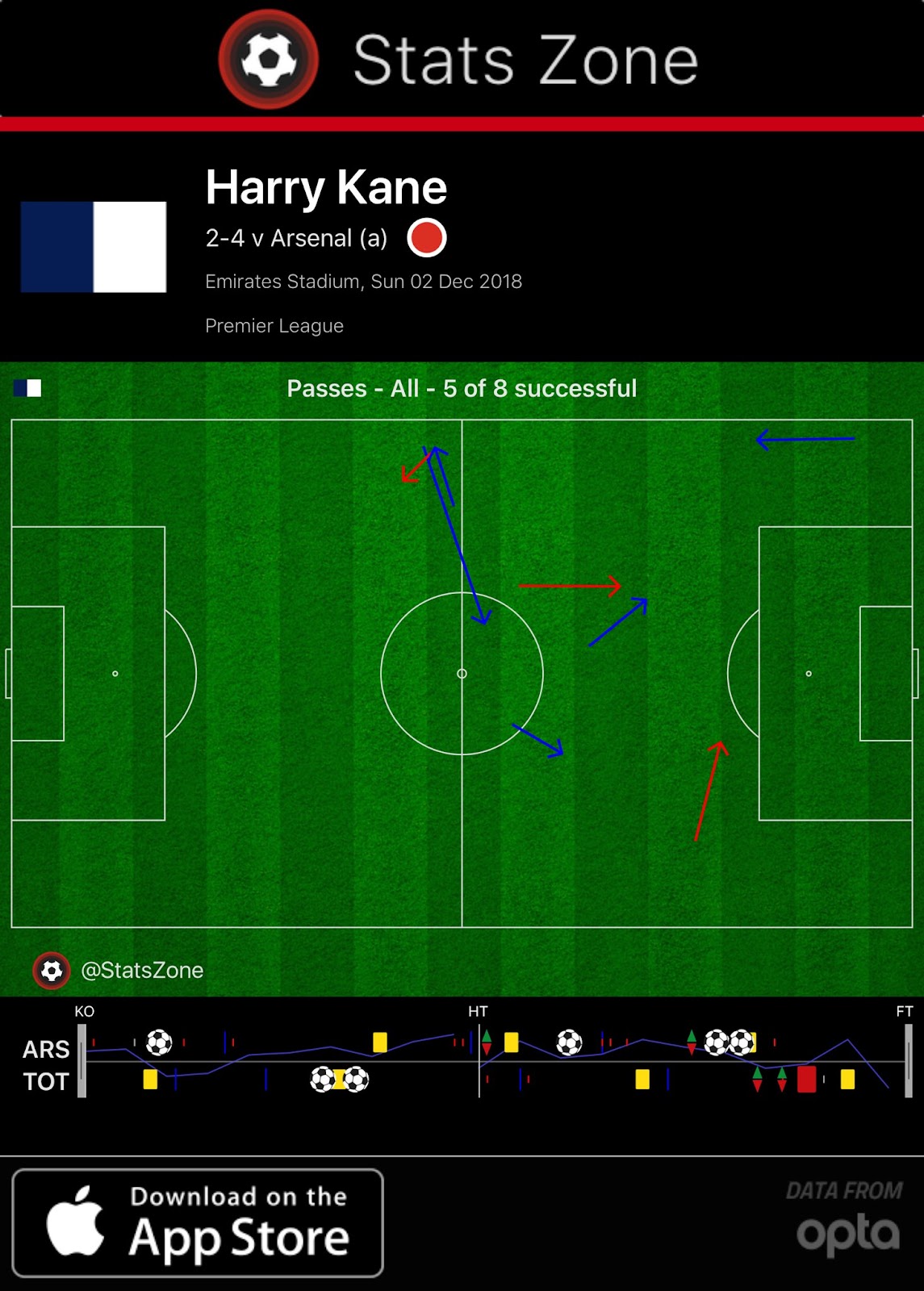 6 - Successful passes by Dele Alli in the 2nd half

4 - Number of those passes which were kickoffs

4 - Number of times Alli was “fouled” (2nd among all players)

11 - Successful passes by Aaron Ramsey in the 2nd half 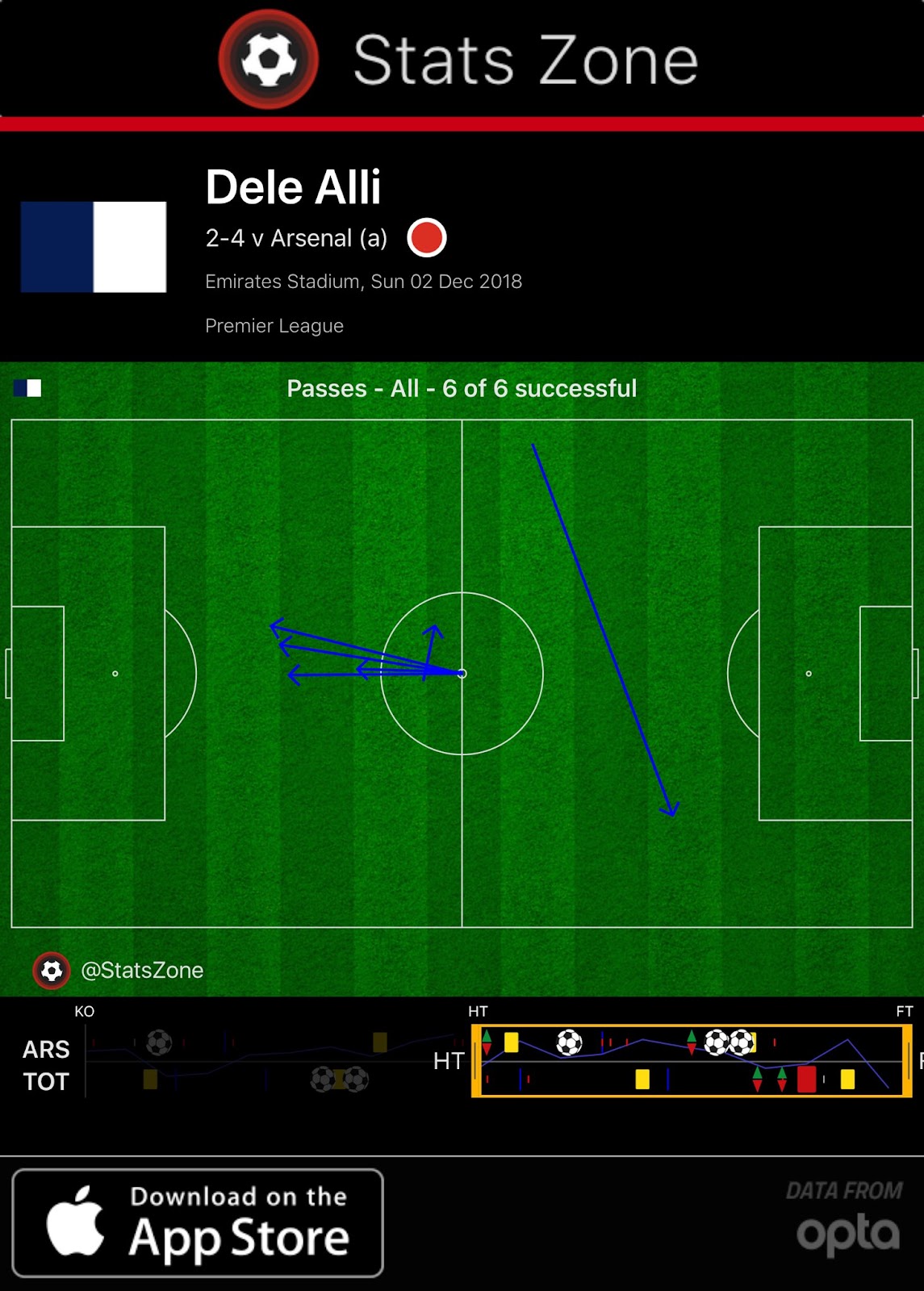 One pattern of play in this match was the fact that just four Spurs players were fouled. Kane (5), Alli (4), Son (3), and Foyth (1). Many of these (especially the penalty) were just straight up dives. This type of cheating is rarely criticized because they don’t do it in the penalty box but it is a deliberate tactic deployed by teams who have set play specialists and Tottenham are set play specialists. They lead the League with 8 set-piece goals (tied with Liverpoo) so far this season and they have just 11 goals from open play, 10th in the League and less than half of Arsenal’s 23 (goals from open play). So many people talk about how great and progressive Pochettino is or how Eriksen is “the player that Mesut Ozil wishes he was” but they are a team which relies heavily on a very old version of football.

On the other side of the ball, Pochettino tends to deploy a deliberate tactic to stop both teams from playing football. This is part of the reason why so many Tottenham players had such low passing stats: yes, Arsenal pressed and harassed, but Tottenham don’t really want the ball in these games, they want to “get a restart”.. So, while Arsenal “fouled” just four different players, Tottenham fouled 11 different players 16 times. The result wasn’t an extraordinarily low passing percent for Arsenal (85% today, season average is 84%) but Arsenal completed 64 fewer passes than average.

It’s really extraordinary. Tottenham are 5th in the League in passing the ball (511 per game) but against Arsenal today completed just 236/329. That’s partly down to Emery’s tactics- he flooded the midfield with excellent ball playing mids (Guendouzi, Ramsey, Xhaka, and of course Torreira) - but it’s a pattern of play I’ve seen often from Poch when he faces Arsenal. That said, I feel like it’s going to be difficult to win matches when your most frequent pass combinations are Dier to Foyth (10), Davies to Eriksen (9), and Vertonghen to Lloris (8).

32 - Goals scored by Arsenal this season (2nd in the League)

I’ve complained about Emery changing tactics in the 2nd halfs before and while it is a bit frustrating that he seems to rarely get it right from the start I have to admit that his changes are for the most part excellent.

I have also pointed out many times that Arsenal “maybe lack a little bit” in attack but this team is really starting to gel and today against Spurs the Gunners had 22 shots. This follows on a string of recent performances where Arsenal have had 20+ shots per match and is a sure sign that Emery is starting to get the most from his men.

I have also repeatedly pointed out that one of two things would happen with Arsenal’s “xG” stats: either they will continue to be a team that is “getting lucky” and scoring off relatively few chances or they will start creating more chances. I’m very happy that we have done the latter!

I wonder… if this is a “2nd half team” will that extend to the 2nd half of the season? I hope so!

Once again, Arsenal made a ton of tackles in a big match. Like the game against Liverpool, Arsenal have a newfound “steel” and love to get the tackles in all over the pitch. Where last year Wenger’s men averaged just 16 tackles a game, this year they are only up to 17.8, but in these big games, the players are really giving us a show. Today against Spurs, Arsenal attempted 32 tackles (they won 25), in the Liverpool match they won 20/33, and against City 22/31.

Often stats will lie in the averages or people will cry about “sample sizes” but sometimes you have to look at the single games, or the one very small stat, to tell the story accurately. And I think that this change from averages of just an additional “tackle per game” to “doubling” the number of tackles in big matches is a huge stat.

Torreira gets the plaudits for his contributions but the whole team is eager to get stuck in. Pierre-Emerick Aubameyang led the charge with 5/5 tackles today and Emery’s boys actually had 12 players who put the boot in.

I truly hope Emery keeps this up against Man U. This is exactly what Arsenal supporters have wanted from Arsenal for a LONG time.