Arsenal 4-1 Fulham: Behind the Numbers

Arsenal created a season high 9 big chances and did so without the help of the referee awarding them dodgy pens. To find a match where Arsenal created 9 big chances I had to go all the way back to matchday 5 of the 2015/16 season, September 2015, and the 2-0 win over Stoke City at the Emirates. In that match, the big chance can hazzers (which is what I called them because of the can haz cheeseburger meme that you will have to ask your parents about) were Walcott (x5), Giroud (x2), and Alexis and Ozil. Only Walcott and Giroud scored in that game. But the point is to remind people of the absolutely potent attack that we had that season, the year that Ozil notched up 19 assists.

It’s funny because when I looked at the stats the other day, I saw that Arsenal were only creating 1.75 big chances per game. This was down from the historical 2 big chances per game under Wenger which I was used to and I wrote a piece saying that while everyone else was worried about the defense, what I most wanted was Arsenal to kick start their offense. They weren’t creating enough chances for me, especially after the poor showing against Liverpool.

But what a difference a single game can make! 9 big chances in one game is 20% of Arsenal’s 46 big chances created this season. In one match. And if we go back to matchday 11 what we see is an increase in offensive output as measured solely by Big Chances: 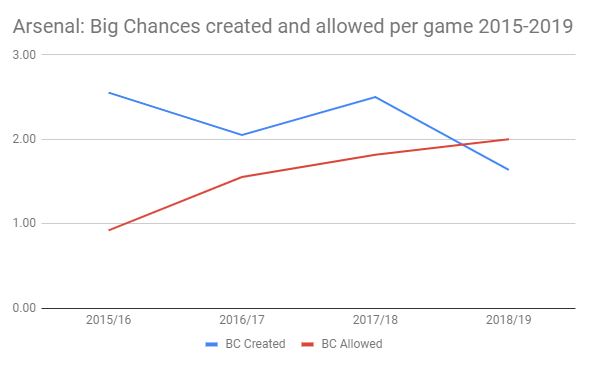 Above is the chart for matchday 11: Arsenal were averaging 1.6 Big chances created per game and allowing 2 per game. Since then, things have gotten a bit better: 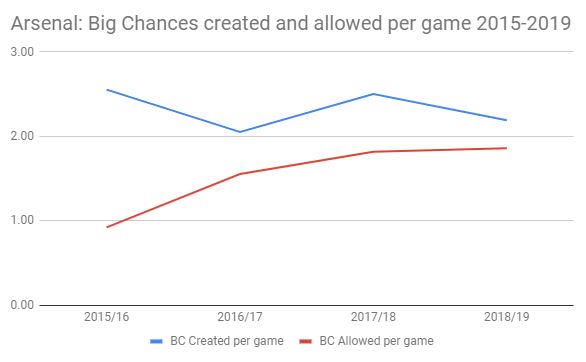 The chart above is after matchday 21: Arsenal are now (thanks to today’s 9 big chances) creating 2.19 big chances per game and conceding 1.86. That latter number is bad, really bad, but it’s better than it was 10 weeks ago. So, I guess we are seeing some progress on the process.

Kolasinac had 3 - bringing his season total to 7

Xhaka had 1 - bringing his season total to 3

And Guendouzi had 1 - bringing his season total to 3 also

I thought you might also want to know which players shot the big chances:

Aubameyang took 4 - he didn’t score any, bringing his total big chances missed to 15, a League high. This is something you have to put up with from Auba - just in League play he missed 25 big chances for both Arsenal and BvB in each of the last two seasons.

Ramsey had the unassisted big chance, scoring it.

4.75 - Expected goals for Arsenal in this match

When your team creates a lot of big chances you’re going to have a high xG and that’s what happened with Arsenal today. As a side note, Understat uses a more conservative formula and their xG was 4.24. I think almost all of that can be accounted for with the Guendouzi to Aubameyang chance which I rated much higher than they did.

2.02 - Expected goals for Fulham in this match

And finally, Arsenal allowed Fulham to create 4 big chances in this match bringing the total to 39 big chances allowed by the Arsenal midfield and defense. That’s more big chances conceded in 21 matches than we conceded in all of 2015/16 when we allowed just 35 big chances in 38 matches. The defense has been on a steady climb up since then as you see on the graphs above.