Arsenal 3-1 Leicester: Behind the Numbers

The year the Normans first planned to invade England in support of Edward the Confessor. They would be blown off course and instead ravaged Brittany (the place). The Normans would return 33 years later in 1066 and make everyone in Britain speak French for 50 years - a situation which most people described as “tres merde”.

1033 is also the number of key passes Özil the Creator has created since 2006, leading all players including Payet the Freekicker (1016) and Fabregas the Traitor (932) (source, Opta).

Of those 1033, Ozil has created 575 shots for his Arsenal teammates just in European and Premier League play alone. I don’t have the stats for the domestic cups but I think that 575 in 6 years is impressive enough.

Those matches account for 186 of his Arsenal appearances and mean that Ozil averages 3 key passes per match or one key pass every 27 minutes on average for Arsenal.

He also has 61 assists and 39 goals in those same matches. 100 combined goals and assists in 186 matches. Ozil has two FA Cup goals that aren’t accounted for in these numbers and probably (based on his normal output) carried on with similar assists, key pass, and shots stats in his 18 domestic cup appearances for the club.

His key passes p90 are also way down, from 3.5 last season to 2 this season. This could be partly down to Emery experimenting with him on the right. We will have to see how Unai plays him going forward. It’s pretty clear from yesterday’s match that centrally behind a pair of strikers is very effective.

Arsenal scored two more “Emery Ball” goals. These are now trademark triangle attacks, with a runner wide and the final ball a cross right in front of goal. However, for the third goal most of the Arsenal team was involved.

Starting with Bernd Leno, the whole move for the goal was just 9 of the 700 Arsenal passes but it was one of the best strings of 9 passes you’ll ever see:

There were actually an additional five passes before Leno started the attack. But I don’t know who they were!

Not quite as exciting as the goals Arsenal scored was the tactical change that Emery made in the 60th minute which led to both of Arsenal’s winning goals. With Lichtsteiner exhausted from his first half efforts, Emery brought on Guendouzi in midfield and put Granit in the left back position.That change may have gone unnoticed by most folks but it shows up quite readily in the numbers and the pass maps.

Here is Granit Xhaka’s dashboard (all actions) after the 60th minute: 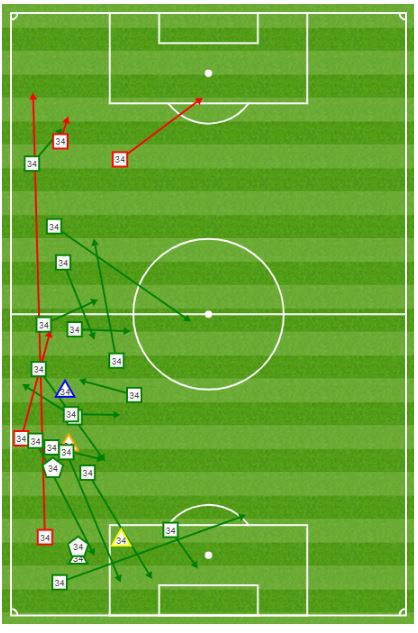 In just 28 minutes, Guendouzi was 2nd on the team in xG Buildup (passes that lead to a non-shot xG score) with 1.47. I mention that stat first because these are the xG off the non-shot passes that we are counting here. He was also 4th in xG Chain with 1.47 - these are the passes that led to a shot, such as the pass that he made to Bellerin, which was crossed to Lacazette, which was played through to Ozil who clipped the final ball to Aubameyang.

I think Emery was experimenting with a Guendouzi/Torreira midfield partnership which worked this time. It’s probably going to be a while before these two are the regular starters but these green shoots were lovely.

The xG timing chart also shows the impact of all of Emery’s 60th minute subs. 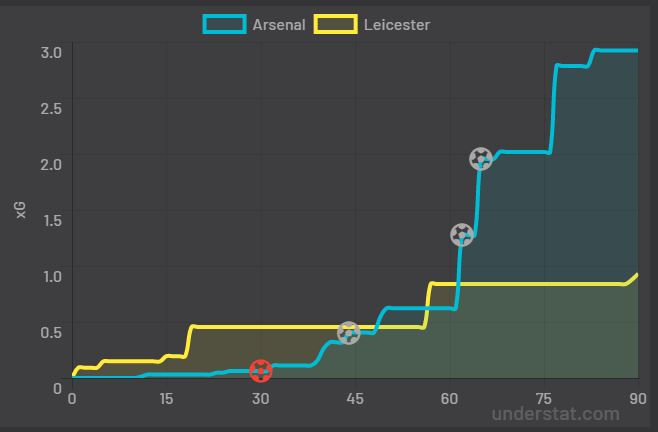 Aubameyang was one of the main subs and led all players in expected goals with 1.33. He scored two goals off two shots, both of which Understat.com had down as a 66% scoring chance. Add those two together and you get the 1.33 xG.

But you might be thinking “hang on a minute, 66% chance of scoring? Weren’t those right in front of goal? More like 99% chance, m8!” Again, this reveals a little bit about how the model works in that it does take the average of all shots from those (or similar) positions and 66% just happens to be the rate for this model on understat.com. There are a lot of competing models out there and you may see different numbers. Again, not to bore you with this stuff but overall these are very accurate models, though not 100% accurate, obviously.

Switching gears for a second, Lacazette led Arsenal with an xG Chain of 2.4, Auba was second with 2.24. Lacazette was the one who played the pre-assist to Ozil which bumped his xGChain up 0.66 but he also had that big chance which S’Michael was lucky to save. That shot, which left Ozil and Lacazette grabbing the nets in disbelief, carried the highest xG of any Arsenal shots this season, 0.77.

Sorry this is so short but it’s a work day and I have to take the dog for a walk.