One uncomfortable thing about writing this column for The Arsenal Review is that I don’t really know my audience yet. I don’t know who you are and I don’t know if you know who I am. So in the interest of closing that loop a bit I want to tell you about one of my first ever real concerts.

It was the Fall of 1987, I was 16 years old and I was the kind of American kid who wore old Army jackets with my favorite band scribbled on the back. “SUBHUMANS” was on the back of my jacket, along with a rendition of the skull that they had on their 4EP-LP. What’s a “4ep-lp”? It’s a “long play” (LP) record, a piece of vinyl with sound waves literally pressed into it, that was comprised of four “extended play” (EP) records. The ep’s were shorter than the lp’s, so this record had four ep’s on one lp. If you want to know more about records, you should find someone with a goofy mustache (or a mustache tattoo on their index finger), wearing an odd pastiche of clothing, and ask them.

The band I went to see was Flipper. They were my other favorite band, after SUBHUMANS. They played last and could only play half a set because Will Shatter (who would die a few months later from a heroin overdose) had his arm in a cast. They were still amazing for their sheer ability to shock and make noise - I’d never heard a guitar scream melodically for 30 minutes straight before - but watching them pack up after a short set was disappointing.

The surprise of the night was a band named SNFU. This Canadian hardcore band filled in for Die Kreuzen and as soon as they took the stage, the energy in the room went up three notches. They had a signature punctuated equilibrium musical style where they would play a riff for a second and then stop, only to start up again. Their riffs went - fast fast fast, stop, fast fast, stop and so on. The lead singer also had these super long braids coming out of the top of his head and he would punctuate all of their stops with either a flip of his hair (so that it stood straight up) or with some kind of acrobatic move. Every song was a ride.I went out the next day and bought their album. I'm listening to that album, And No One Else Wanted To Play..., right now.

The 2018/19 Premier League season is set to kick off in just a few days and to continue the analogy I hope it’s more SNFU than Flipper. Man City are the runaway favorites to win this thing and I’ll show you why in just a few seconds but Liverpool are under pressure to put in a good challenge after spending £150m on 4 players this summer. Meanwhile, Arsenal have quite the mountain to climb just to get back into the top four.

It funny to think that just a few years ago, a lot of Arsenal supporters were saying “I hope Arsenal drop out of the top four” or making fun of Big Weng for saying that getting into the top four was like a trophy. A few years later, the Premier League has gone nuts with spending and getting in to the top four isn’t just a trophy it feels like a major accomplishment. And realistically, Arsenal have been o far off the pace the last two seasons that a top four finish would be a major accomplishment. 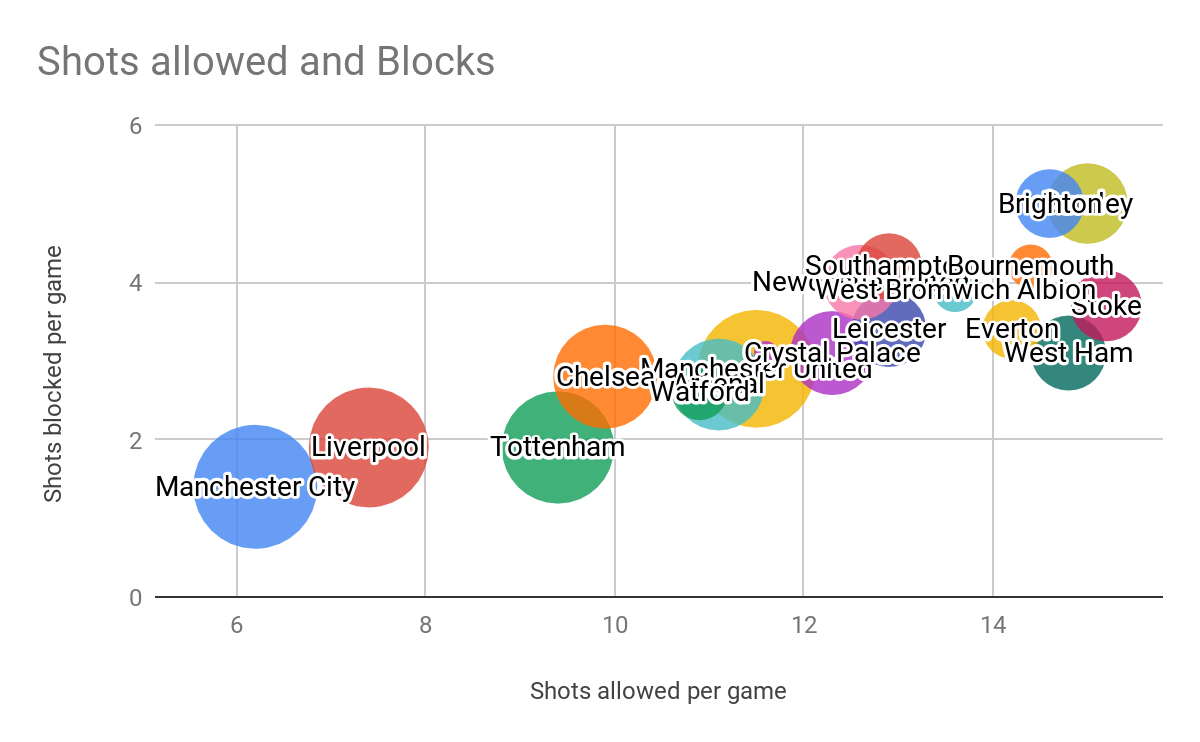 Arsenal’s problems last season were two things: mediocre defending both home and away, and horrible chance creation in away games.

In the above bubble chart I have shots allowed per game across the bottom and shots blocked per game as my vertical axis. Man City were the best at both stats, allowing the fewest shots and blocking the fewest but Liverpool were a close second behind them. This is one of the main reasons why I pick Liverpool to be City’s biggest rivals for the title - structurally, they play sound football. They control possession, they attack, and thus limit their opponent’s overall chances.

Limiting your opponent’s chances is critical in football and just to illustrate how critical: Man City’s keepers made just 60 Premier League saves last season, Liverpool’s keepers 66 saves, Arsenal’s keepers made 95 saves, and David de Gea made 117. That’s why both Man U and Arsenal are in the middle of the pack in that graphic, there with clubs like Watford and Crystal Palace. 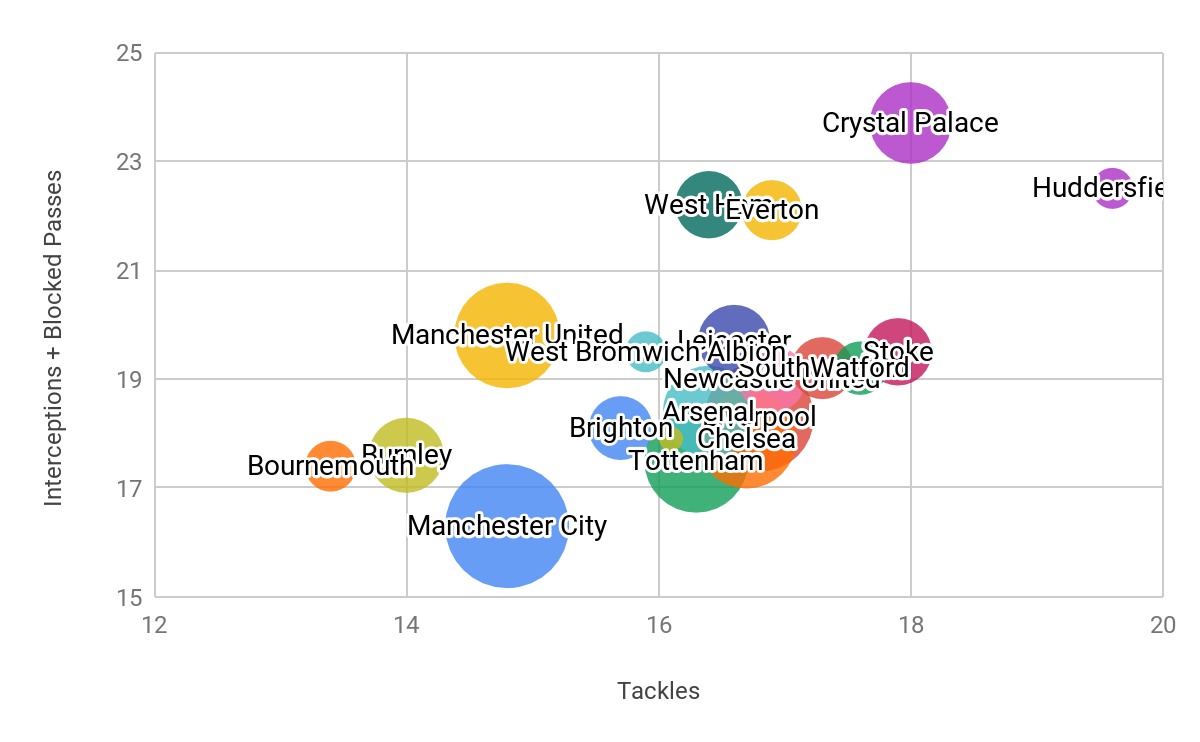 This ability to limit chances has almost nothing to do with what we consider “defensive” stats; tackling, intercepting, and blocking passes. Notice that Man City, Bournemouth, and Burnley all had similar defensive “styles” in that they didn’t wrack up a lot of defensive stats. It’s kind of crazy to think that Burnley, who had the 5th lowest possession stats at 45% also has the 2nd lowest tackles, interceptions, and blocks stats.

The reason for that is simple: it’s the low block style. In a low block defense, you don’t want your team coming out to try to win the ball back, you only tackle and attempt to stop an opponent when they are in the final third. The rest of the game is usually spent trying to kill the clock.

What I’m saying here is that the number of tackles a team makes doesn’t tell us how good they are, it simply tells us how they play. Arsenal were a totally average defensive team in the Premier League last season. They, in essence, didn’t have a defensive style. 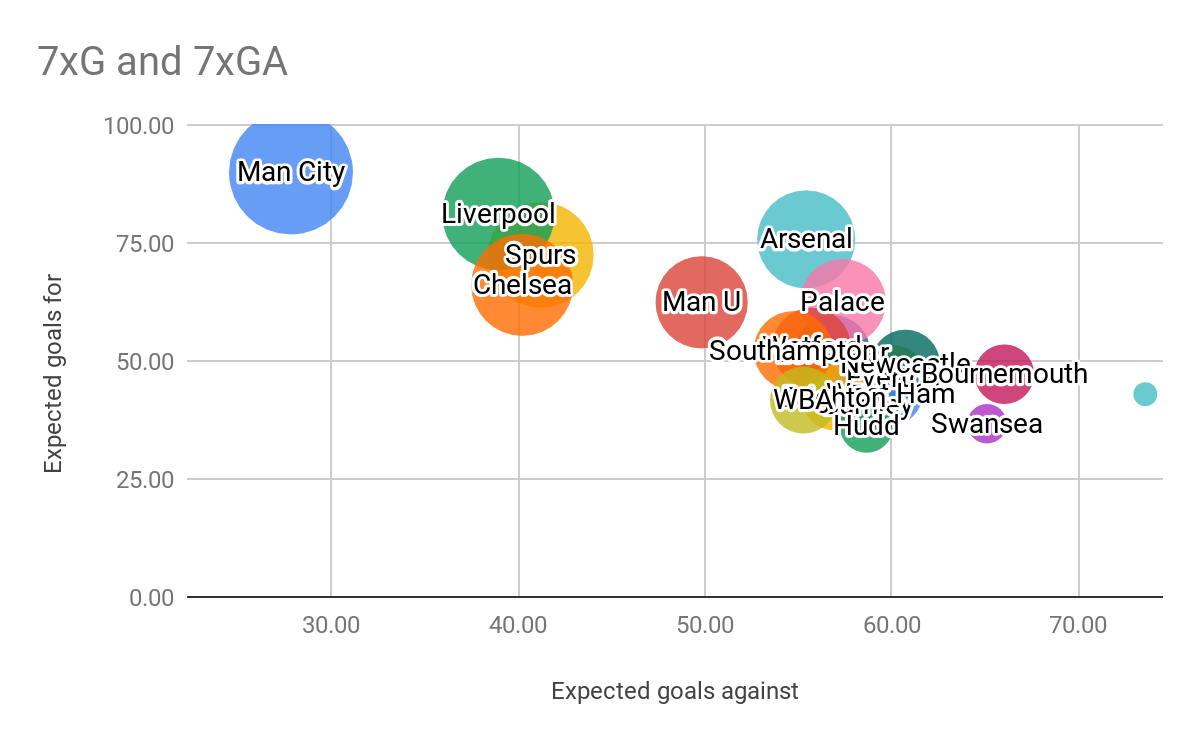 This problem with Arsenal’s defense shows up again when we adjust shots for shot quality using expected goals. Again, Man City are nearly off the charts on the left creating nearly 100 xG with less than 30 expected goals against. And Liverpool, Spurs, and Chelsea are right behind them in a second little group of teams. As a side note, that location of those three teams would traditionally be where the champions would come from. But Man City were just so incredible last season that they didn’t even get close.

As for Arsenal, we created a good number of expected goals for (75) - which would have put us in the group with Liverpool, Spurs, and Chelsea, but our problem was that we had an expected goals against of 55. That moves our bubble from that group on the left over to the pile on the right, the pile with all of the mid-table teams. You have to dig a bit further into Arsenal’s stats to see why we were so poor, however.

The first is that Arsenal’s defense was unreliable. We know that to be factually true because they gave away the most errors of any team last season, a record that Emery absolutely must improve on if he’s to have any success at the club. But just to hammer home the point, Man City’s total home/away expected goals against was just 27. Arsenal’s defense was twice as likely to give up a goal. 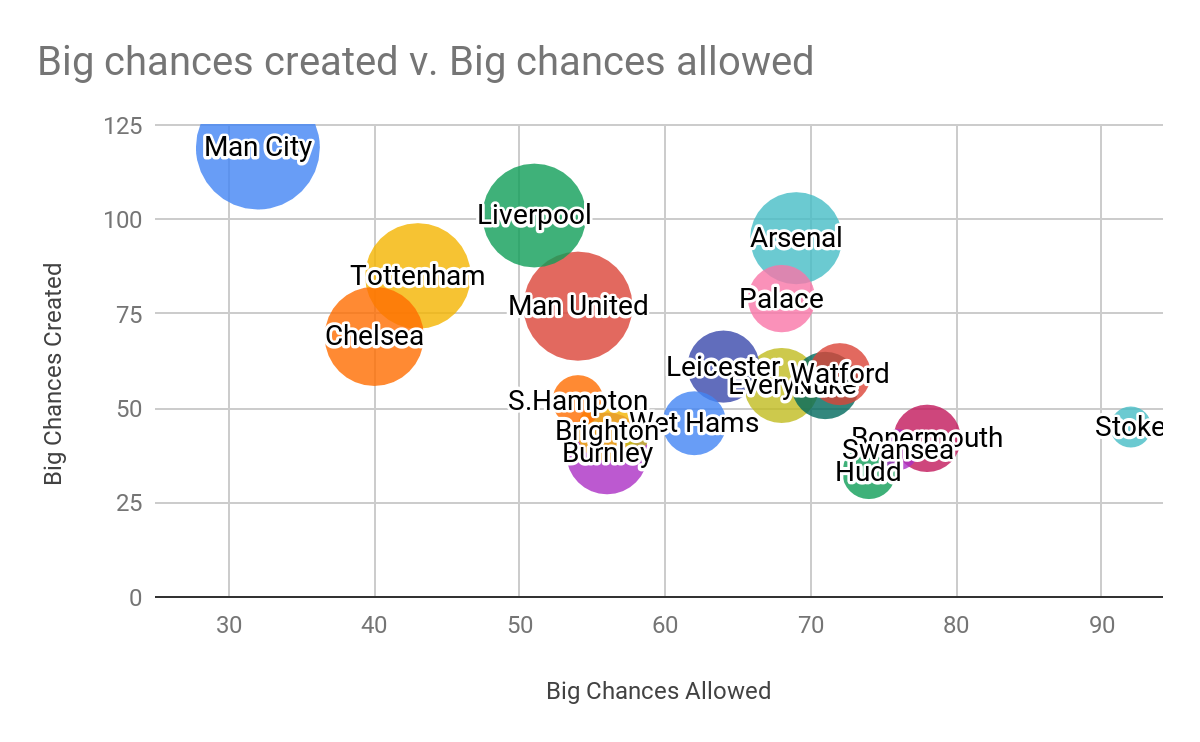 Managing our (fan) expectations around the Arsenal defense is probably the biggest gift we can give ourselves this season. I don’t think it’s fair to expect Unai to sweep in the changes that take Arsenal from a team which conceded 69 big chances and an expected goals against of 55 into a team which dominates defensively, like City did. Even the addition of a star DM like Torreira isn't going to "tackle" this problem.

However, I will point out that only three years ago, 2015/16, Arsenal conceded the fewest big chances of any team in the league, just 35. That was the season when Arsenal’s midfield was comprised of Cazorla and Coquelin with Ozil creating loads of chances up front (we created the most big chances that season as well with 97 and if only some players finished their chances better we would have won the League). It took two full seasons to get to where we are now and it will probably take two more to get out.

The thing that may surprise you, like SNFU did me all those years ago, is that the expected goals of just 28.5 in away games last season may actually be a reason why Arsenal struggled defensively. If Arsenal can regain some of their attacking prowess in away games I think that their away stats like big chances conceded and ultimately expected (and real) goals against will drop. It’s not going to be the number of tackles that we make, nor the number of interceptions, but rather, it’s dominating possession and putting opposition teams under a lot of pressure which will lead to better defensive numbers. If Unai Emery can get our “mojo” back in those away games, while tightening up the defense a bit all around, I think we could see a shift in our defensive numbers - moving errors down, big chances conceded down, expected goals conceded down, shots saved down, and ultimately goals conceded down.