Arsenal 2-0 Watford, a lucky escape for the Arsenal

Arsenal allowed Watford to create 6 big chances against them. That’s the most the Gunners have allowed since Tottenham’s 1-0 win in February. And those 6 big chances allowed takes Arsenal to 15 for the season, 2.1 per game at the moment. Now obviously, we are just 7 games in to the season and counting the per game stats right now, after conceding 6 in a single game, can be misleading because we are definitely going to get better. We really have to, there’s no where to go but better from this. But it’s very worrying to concede that many big chances at home to a team like Watford and it continues Arsenal’s absolutely terrible defense from the last two seasons. 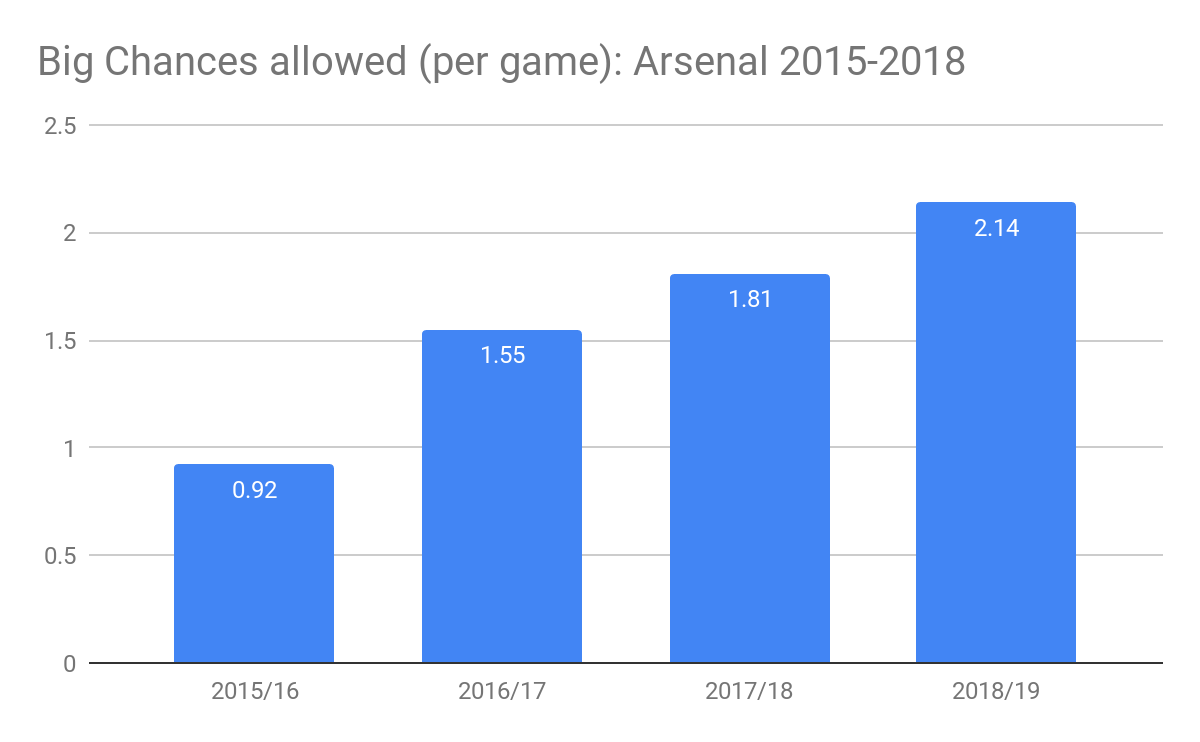 Again (I’m tired of saying this) I’m not complaining about Emery. This is the mess that Wenger left him but this does show the size of the task ahead.

I’m a long-time believer that big chances start and stop in the midfield and Arsenal’s midfield is a mess at the moment. Arsenal’s leading tackler is still Guendouzi with 14. He’s also Arsenal’s most prolific midfielder in terms of interceptions with 12. Mustafi has 11 tackles, Lacazette has 10, and Torreira has just 10. Xhaka has 9.

Aaron Ramsey leads Arsenal in being dribbled past with 12 and Xhaka is up there with 10. Both players are in the top 10 for this ignominious stat. Guendouzi has only been dribbled past 4 times. 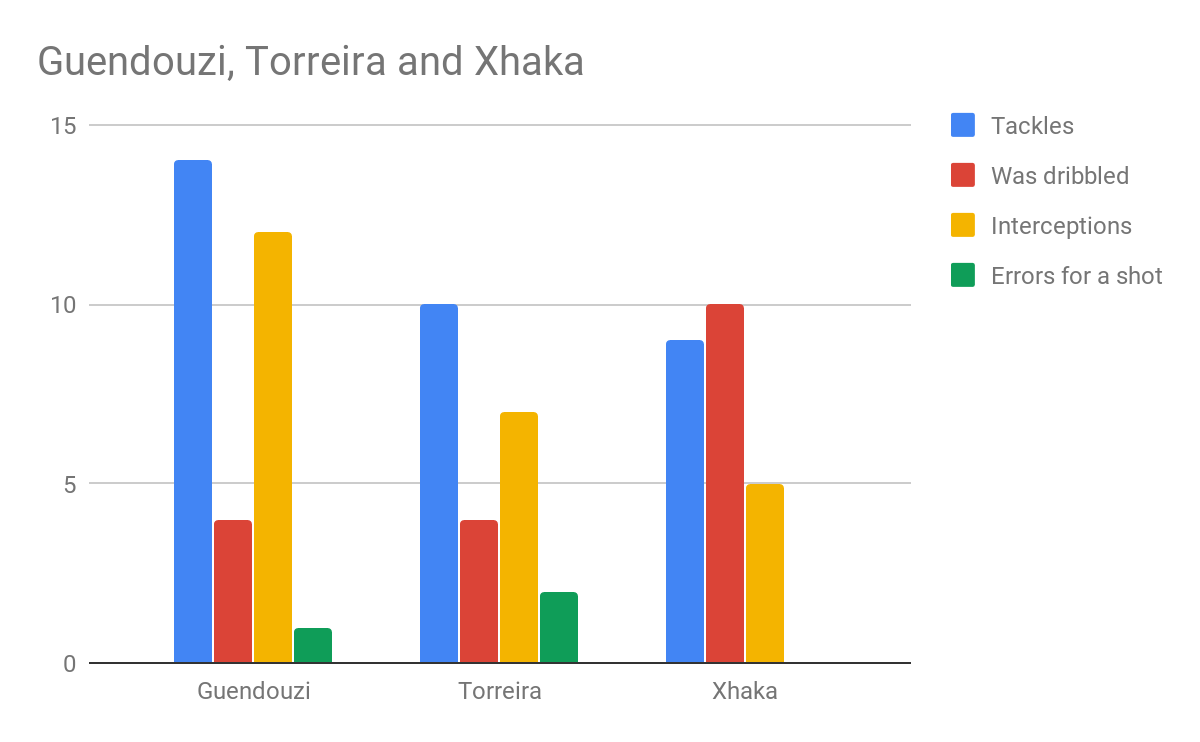 You have to go back to October 2016 to find the last time an Arsenal keeper saved three big chances in a Premier League match. That was a 0-0 draw against Boro at the Emirates stadium. Cech was the keeper and man of the match.

What’s funny here is that I have Arsenal making an expected saves of 29 and the team has 30 saves so far. What’s not funny is that 30 saves is 3rd most in the League. Joe Hart leads the League with 34 saves, Fabianski has 32, and Cech has 27.

Another oddity about these stats is that Arsenal have conceded 9 goals and have an expected goals conceded of 9.61. The reason why Arsenal have conceded 9 is that they have allowed 2 goals from outside the 18 and are only saving 64% of non-big-chance shots inside the 18 yard yard box. In other words, Arsenal’s keepers are saving big chances and dropping clangers everywhere else.

Many different sites use different methods to calculate expected goals. This number above is from a site called understat.com. My formula had Watford gathering an xG of 3.27, 1 higher than understat. My formula is rather simple, however.

Understat also gives us is the timing chart: 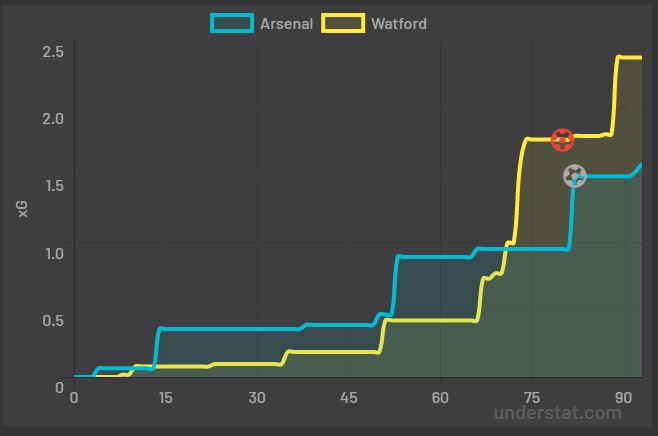 This exposes the fact that most of Watford’s xG came at the end of the match, after the 66th minute when Emery swapped Ramsey and Iwobi to go for the win.

Some other cool stats that underscore keeps are xG Buildup and xG Chain. Expected Goals Buildup is calculated by taking the xG for a move ending in a non-shot and assigning it to all the players who had a touch in that buildup. A perfect example of this is the own goal: Iwobi’s cross was a fantastic bit of play but his cross was not actually a key pass because an Arsenal player didn’t get a shot from that cross. That said, the cross still had an xG value and Iwobi was assigned that value for that play. So, it’s no surprise that Iwobi was Arsenal’s best player in terms of xG Buildup with 0.6 in this match.

He was Arsenal’s 3rd best player in xG Chain, with 0.64. xG Chain tracks backward from a shot and assigns the xG value of that shot to any player who made a touch in that buildup. The two are basically the same, Buildup just tracks non-shot xG. You won’t be surprised to learn that it was Lacazette who led Arsenal in that category with a whopping 1.42. Arsenal only had an xG of 1.59 in the whole match. That means Lacazette had a part in almost every goal move for the Gunners.

Here is the team’s full chart sorted by xG Chain:

Ramsey had a poor match in attack, five turnovers, 16/19 passes, and just 0.06 xG Buildup and Chain. That is just one match, though.