Arsenal 2-0 Chelsea - Emery's Plan B: Behind the Numbers

One thing that we can say for certain about Unai Emery is that he always has a Plan B. In the 2-0 win over Chelsea, Emery deployed a very unusual approach for a home game, pressing early to disrupt Chelsea’s buildup, sticking Ramsey and Lacazette on Jorginho, and then once the Gunners had the 2-0 lead shutting up shop and letting Chelsea play with the ball but never really threaten. The result were some pretty incredible numbers for Arsenal in this match, let’s have a look.

Arsenal have 29 points from 12 home games this season, 3rd best in the League. They mostly achieve that record through a ball possession-type of offense, completing 83% of 543 passes (on average) and spending about 28% of their possession in the opposition final third (153 passes). Meanwhile their opponents are limited (on average) to just 76% completion on 374 passes (average) with a similar 29% of their time spent in the Arsenal final third (110 passes). This pattern was true regardless of opponents, with only two exceptions: Man City and Chelsea.

Against Chelsea, Emery’s Arsenal conceded huge swathes of possession allowing the Fulham side to have 648 passes, more than any team at the Grove this season. Chelsea turned all of that possession into 231 final third passes, more than double Arsenal’s season average allowed and more passes than the last two opponents (Fulham and Burnley) combined. 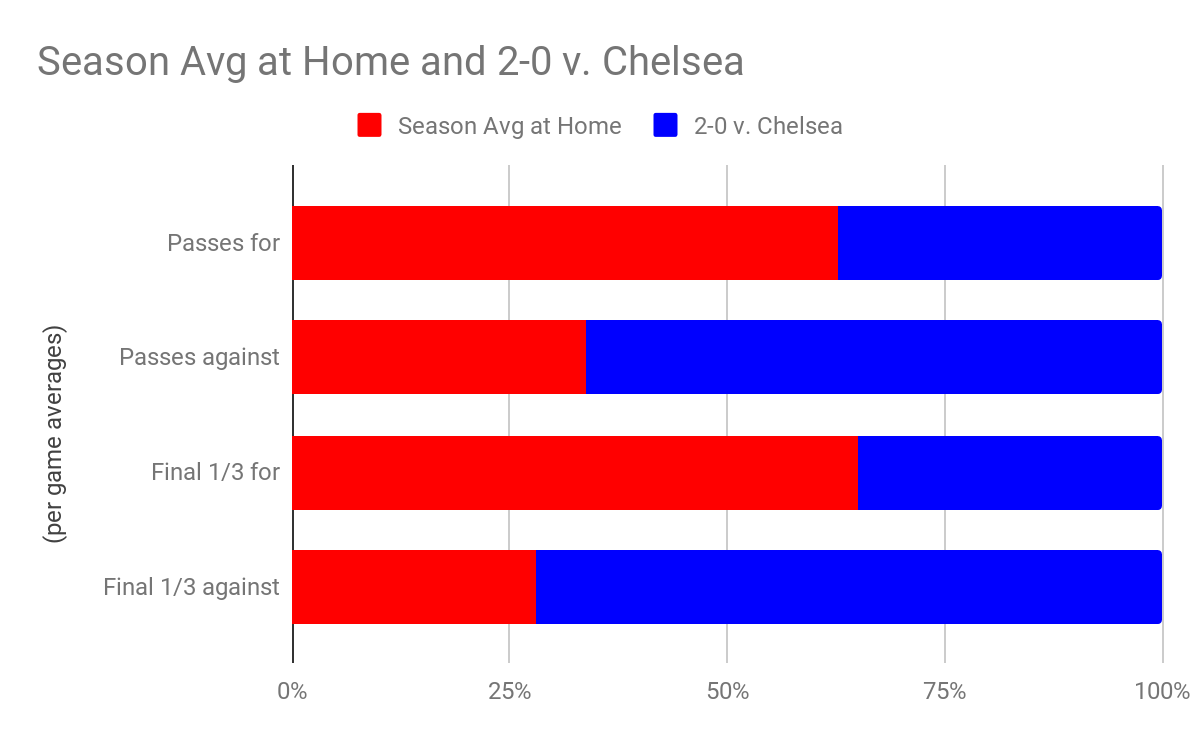 The data on the left is Arsenal’s season average, the data on the right is how much they either completed for themselves (for) or allowed (against). Make sense?

Despite all of that possession, Chelsea didn’t create as much as Sarri would have liked (he was HOPPIN’ mad!): 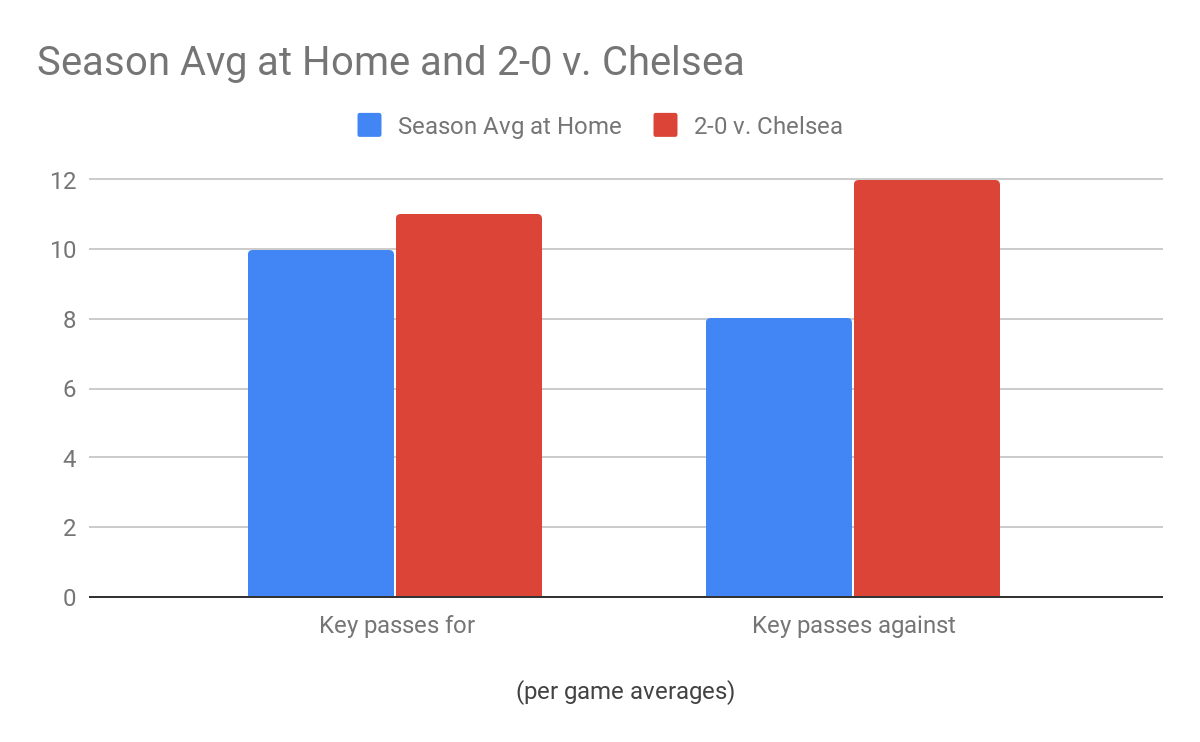 Arsenal created 11 key passes (passes for shots) and Chelsea created 12. And things get even worse for Chelsea when we look at the numbers that start to really count: 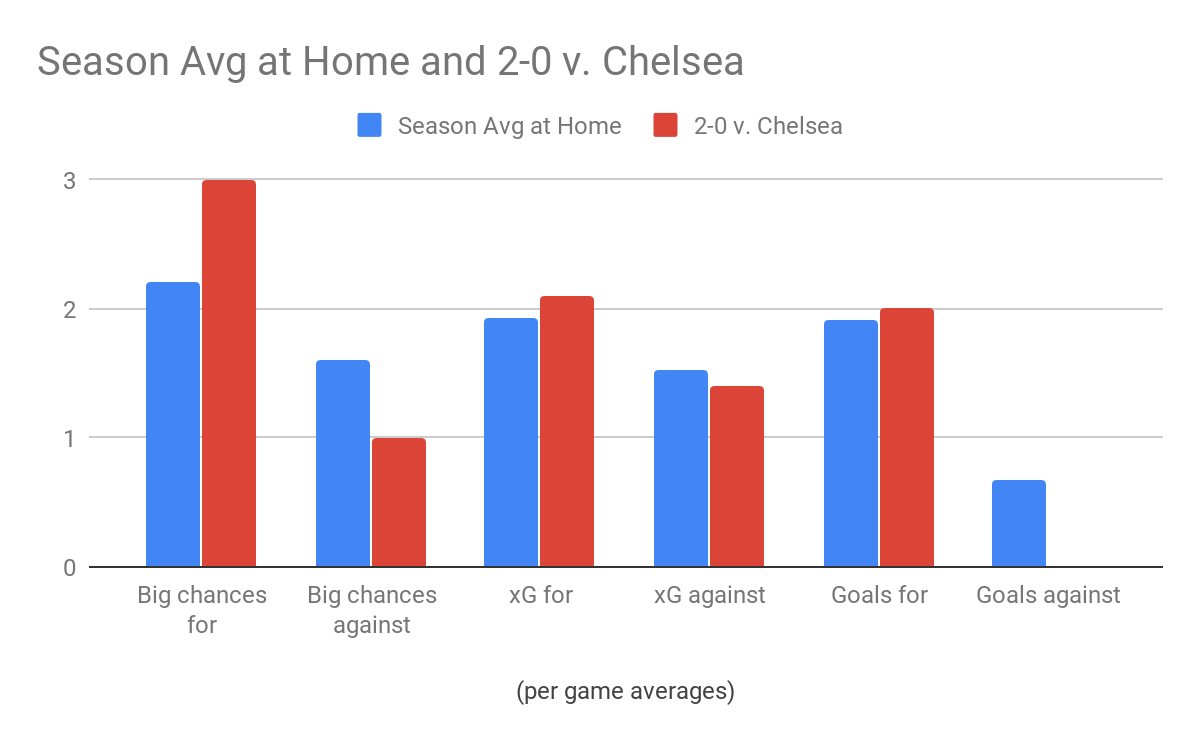 Looking at shot quality, Chelsea created just 1 big chance and the result was a very pedestrian 1.37 xG on their 13 shots. Arsenal allow, on average, a lot more xG than that and more big chances. As an aside, Arsenal’s defense at home is roughly the same as away in xG despite the huge difference in actual goals allowed. That’s partly down to errors but also maybe a bot of good luck at home.

And looking at the defensive stats (which don’t correlate to goals allowed, xG, or pretty much anything but DO look nice and I think tell people how hard a team was working) Arsenal went kind of crazy in this game with tackles, interceptions, blocks, and clearances: 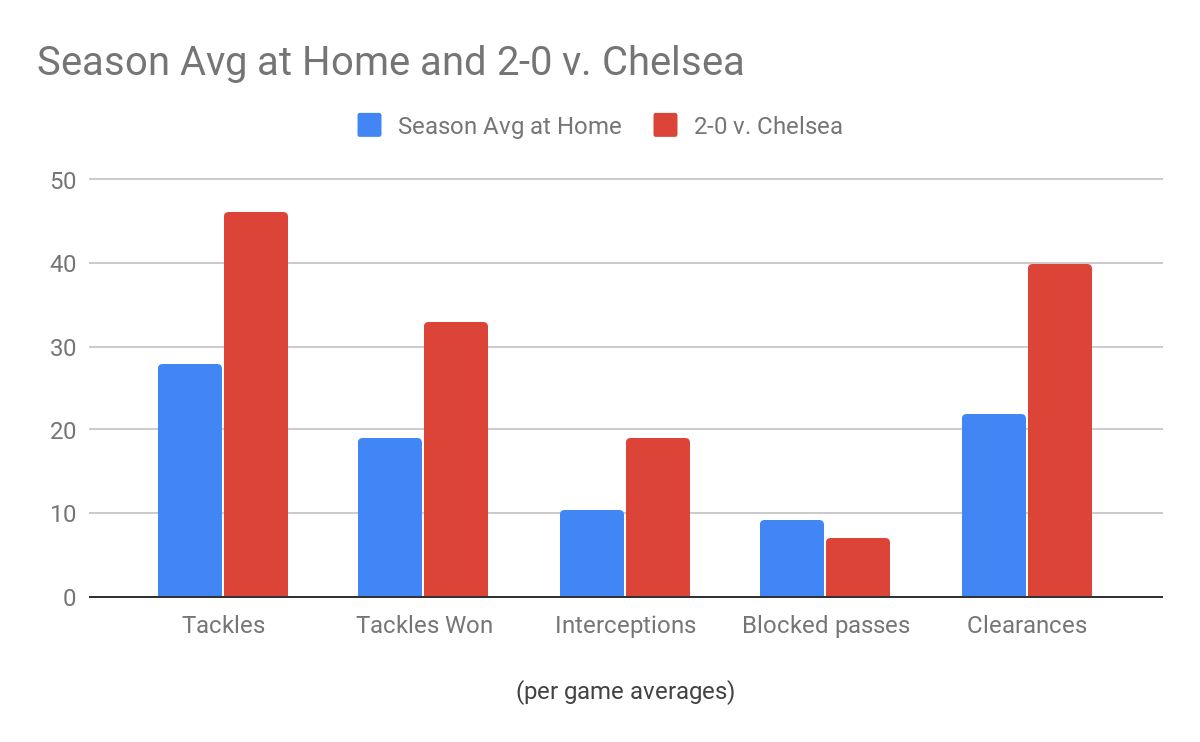 Unlike all of the other charts, there are no data points for Chelsea in the chart above. That’s just how Arsenal did compared to their season average: against Chelsea they attempted 46 tackles and won 33, this season, they average 28 attempted and 19 won. They also had 19 interceptions and 7 blocked passes which is well above their home season averages of 10 and 9. And Arsenal cleared the ball a whopping 40 times against Chelsea, nearly double their season average of 22.

Lucas Torreira was Chronicles* against Chelsea winning a season high 9/12 tackles. I didn’t even know it was possible for an Arsenal player to attempt 12 tackles in a home game. It was certainly against the law until this season. Guendouzi had a poor game (which he will do because he’s young, I still love him) and “only” won 5/10 tackles. But at least he tried! When he missed, though, the defense was there and Koscielny (1), Bellerin (2), Kolasinac (4), and Sokratis (4) won all 11/11 tackles they attempted. Even Maitland Niles was nearly perfect (tackling) and won 2 of 3. You get a sense why Emery likes both Tor and Guen around Xhaka when you see that the Swiss international made just 1 of 2 attempted tackles.

Emery also played Ramsey and Lacazette as a sort of man-marker on Jorginho and it was an excellent tactic. Jorginho leads the League with an average of 98.5 accurate passes per game in away matches and hits them at a 91% rate. With Ramsey and Lacazette harassing him he was limited to 69/81 (85%), which was even more severely limited in the first half when he only completed 29/34. Watching a technician like him hitting bad passes because he was rushed was a joy.

Jorginho is also one of the League’s most prolific final third merchants, pumping in 29.2 per away day. Against Arsenal he was 17/24 in the match and just 6/8 in the first half.

And finally, a quick word about Arsenal’s record v. Chelsea: after the Invincibles season, Chelsea were one of Arsenal’s biggest bogey teams. Between December 2004 and January 2016, Arsenal lost 62% of all matches (18/29) between the two clubs and won just 5 in all competitions. Since September 2016, Arsenal have won 50% of all meetings (5/10) and lost just twice. Up next, Man U.

*Chronicles of Riddick, get it? RIDICULOUS?