Arsenal 1-1 Wolves: Behind the Numbers

16 - Combined errors, penalties conceded, and own goals conceded by Arsenal in the first 18 (Premier League and Europa League) matches this season.

Arsenal were the most error prone team in the League last season, conceding a whopping 32 errors for shots and 15 errors for goals. They also conceded 6 penalties meaning that in 38 games last season, Arsenal made grave mistakes 38 times. If you’re looking for some silver linings, I guess you could say “at least we didn’t concede any own goals!”

But it’s actually not funny. It’s frustrating to watch a football club of Arsenal’s supposed caliber play sloppy football. The sight of Granit Xhaka lifting up a leg to let a cheeky ball through to Cavaliero was ugly enough to earn him an error for a goal. But it was his follow-up defending that really got me: he was completely rinsed by Cavaliero on a simple give-and-go, getting turned inside out like a pair of underpants on a hot day. No team is going to be error-free but it’s a far cry from an average of one per game to something like Man City’s 0.55 (19 plus 2 O.G.) last season.

This season Arsenal are back off to a terrible start in terms of individual errors. In the first 18 matches (including the Europa League) we have made 16 total errors (3 errors for goals, 10 errors for shots, conceded 2 pens, and scored an own goal). The most telling stat of all is that Arsenal have only forced their opponents into 6 errors (2 for goals [Diop and Coates], 2 for shots [Alisson and Ederson] and two own goals [Cathcart and Diop]). We have given up 16 errors, while the opposition have given up just 6.

The problem extends throughout the team as well: Leno, Xhaka, and Lich all have an error for a goal, Mustafi and Xhaka both conceded a penalty (in the same game), and Bellerin scored an own goal. Meanwhile, Holding and Sokratis have one error for a shot apiece and Guendouzi, Torreira, Bellerin, and Cech each have 2.

Just to make this problem more clear: In League play alone, Arsenal have more errors this season than any other team in the top five European Leagues.

This was really something I wanted Emery to sort out. He hasn’t yet.

25 - Big Chances allowed by Arsenal this season in League play

The errors are one problem but there’s a much larger and more worrying trend at Arsenal this season: they have conceded 25 Big Chances in 12 matches. After allowing 3 Big Chances today, Arsenal are now 15th in the League in Big Chances allowed with 25. Newcastle has allowed 24, Cardiff 26. And again, flipping this over, we have only created 19 big chances. It’s not really funny to see that Fulham have created 17 and conceded 29. I guess they are marginally worse than Arsenal in this regard.

There are many factors to this but one of them is the errors (listed above) and another is the slow starts (discussed below). But the only reason that this isn’t absolutely killing Arsenal is that Bernd Leno (and Cech) have saved a League high 76% of Big Chances faced.

And despite Aubameyang’s glaring miss (which is is well known for) Arsenal also lead the League in Big Chance conversion with another unbelievably high 75%.

Just as a point of comparison, the six most stingy teams in the League for Big Chances conceded are:

This clearly can’t continue if Arsenal want to finish in the top 10.

0.83 -  Wolverhampton’s xG up until the 88th minute was a mere 0.83. But after that they tacked on an additional 1.07 xG to bring the total to 1.9 for the match as Traore and company started running into vast swathes of space in the Arsenal defense. 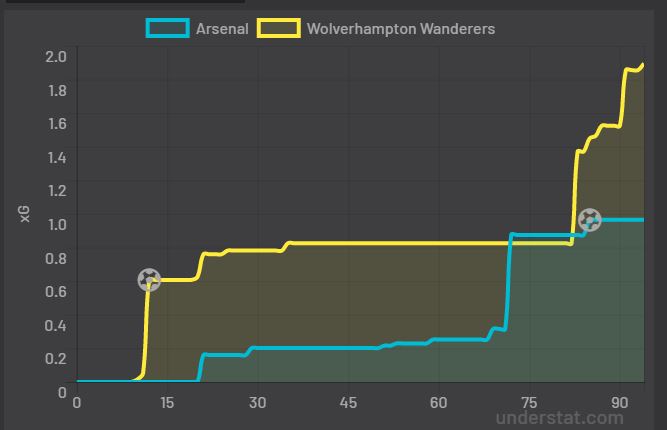 This follows a pretty scary trend from Arsenal this season which we can see in the expected goals timing chart for the Gunners.

Arsenal have scored 18 goals in those second halves but what we are seeing here is a worrying trend that Emery is just throwing everything at the opponents and these games are far too open. It’s not really recommended to rely on lucky strikes and saves to win football matches.

Sources: whoscored.com, screen grabs from understat.com, errors data is my own