Arsenal 1-1 Liverpool: Behind the Numbers 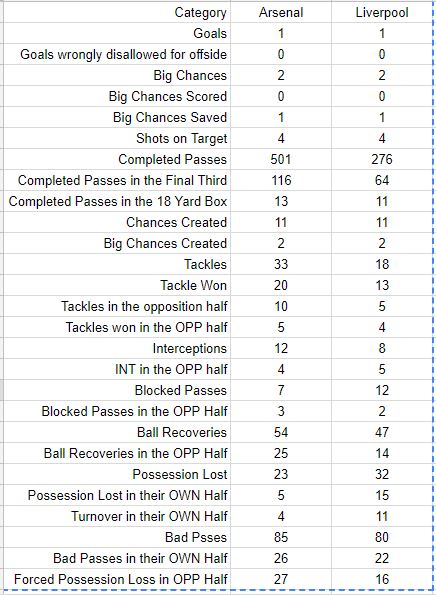 As predicted in my pre-match column, Arsenal tackled a LOT. Arsenal lead the League in tackles and didn’t hold back in this clash with Klopp’s men, putting a foot in 33 times compared to 18 by Liverpool.

One thing that people tend to believe is that there’s an inverse correlation between possession and defense: the more possession, the fewer defensive opportunities. But that’s not the case. It’s not about possession, it’s about how the team approaches the match.

Not only did Arsenal dominate the overall defense but they were also the more aggressive team in the opposition half, something that Liverpool are known for. In the chart above I combined tackles, interceptions, blocks, and turnovers all in the opposition half. Arsenal won possession in Liverpool’s half 27 times compared to Liverpool’s 16. I wish I had a graphic for this but I culled the numbers from two different sources (whoscore.com and the StatsZone app), so I don’t.

You’ve no doubt already seen the stats about Xhaka in yesterday’s match: led Arsenal in passes (85/97) and 2nd in final third passes (17/23), led Arsenal in ball recoveries (16), led in tackles (5/7), had 2 interceptions, and led Arsenal with 2 fouls suffered. Considering the opposition, it was one of his best performances in an Arsenal shirt.

His midfield partner, Torreira, was solid if unspectacular. In one of my articles for TAR, I wrote that I thought Torreira would be a Kante-like midfielder but so far this season he hasn’t put up those types of numbers. Adjusting for the fact that he’s not been on the pitch for every minute of every match we use “per90” stats, which extrapolate how many events he would have in a regular 90 minute period. In tackles, he’s at 2.4 p90, which is 7th among all DMs with at least 4 apps this season. Interceptions are also 7th with 1.4 p90. And (oddly enough) 7th in blocked passes p90 with 0.8. It’s actually Guendouzi, the player I didn’t think would put up huge tackle numbers, who is leading Arsenal in these categories. Guendouzi is 9th in blocked passes with 0.6 p90 but 2nd overall in tackles with 4.1 p90, and 3rd in interceptions with 2.6 p90. Guendouzi averages 7.3 of these defensive actions p90 where Torreira averages 4.6. I honestly thought those would be reversed.

What Torreira does that isn’t counted is close down space. He doesn’t tackle a lot but he does jump out and stop a player from advancing through the lines and often he’s the last player in midfield to do that. Against Liverpool, he only had 2 tackles, 1 interception, and 1 block but I didn’t count how many times I saw him jump out to stop an advancing Liverpool player. No one counts that as far as I know.

Ozil led all players in chances created (4) and final third passes (22/28). He also had 1 tackle (he was dribbled past) and 1 blocked pass. His performance against Liverpool was lost a bit in all of the hubbub about the defense.