Arsenal 1-0 Qarabag: Behind the Numbers

Sorry for the late post. Last night I had my annual family bake-a-thon with my mom and daughter where we bake cookies and watch a Christmas Movie. It’s good fun but far too busy to pop out a stats piece for anyone. However, baking is sometimes good for thinking and last night I had a few moments to think about this post and wondered if there would be any use to showing player data relative to their teammates?

For example, here is a chart for total number of passes v. Qarabag sorted most to fewest: 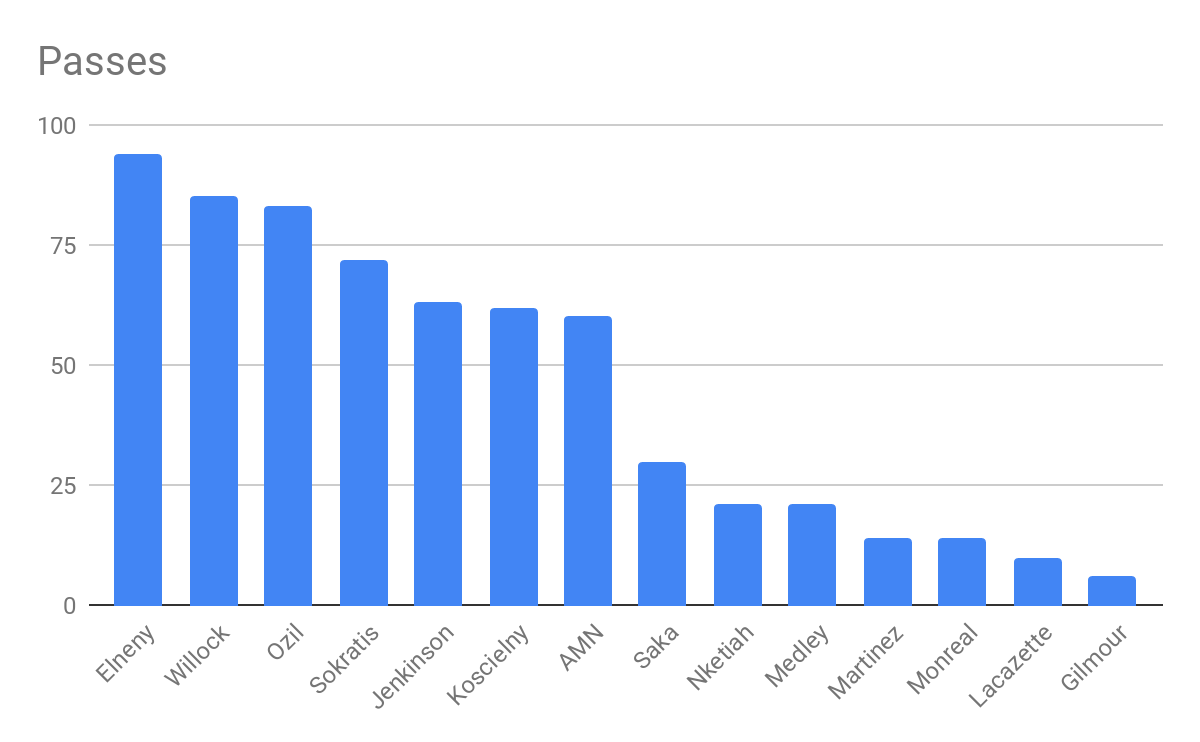 Elneny led the pack and was very composed on the ball. This isn’t a neat pass map like 11 tegen 11 creates but we can see who carried the workload and that there is a pretty large drop off from the build-up players (the first 7) and the forwards. One thing we don’t see here is that Laurent Koscielny completed 62/62 passes on the night. An astonishing percent even if he did mostly play short and safe. 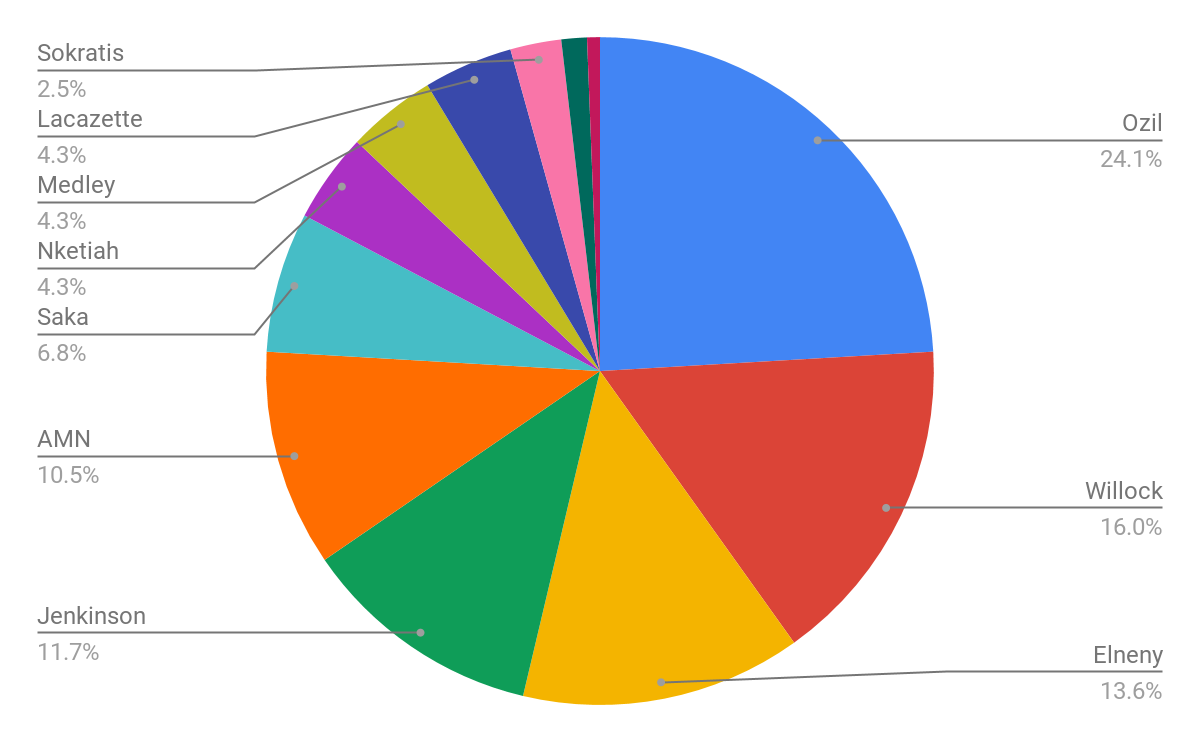 Here we have a chart of which players controlled the final third against Qarabag. Ozil is of course #1 but Elneny dropping further down the chart to third and Willock moving up shows us that Willock was slightly more advanced of Elneny in this match. 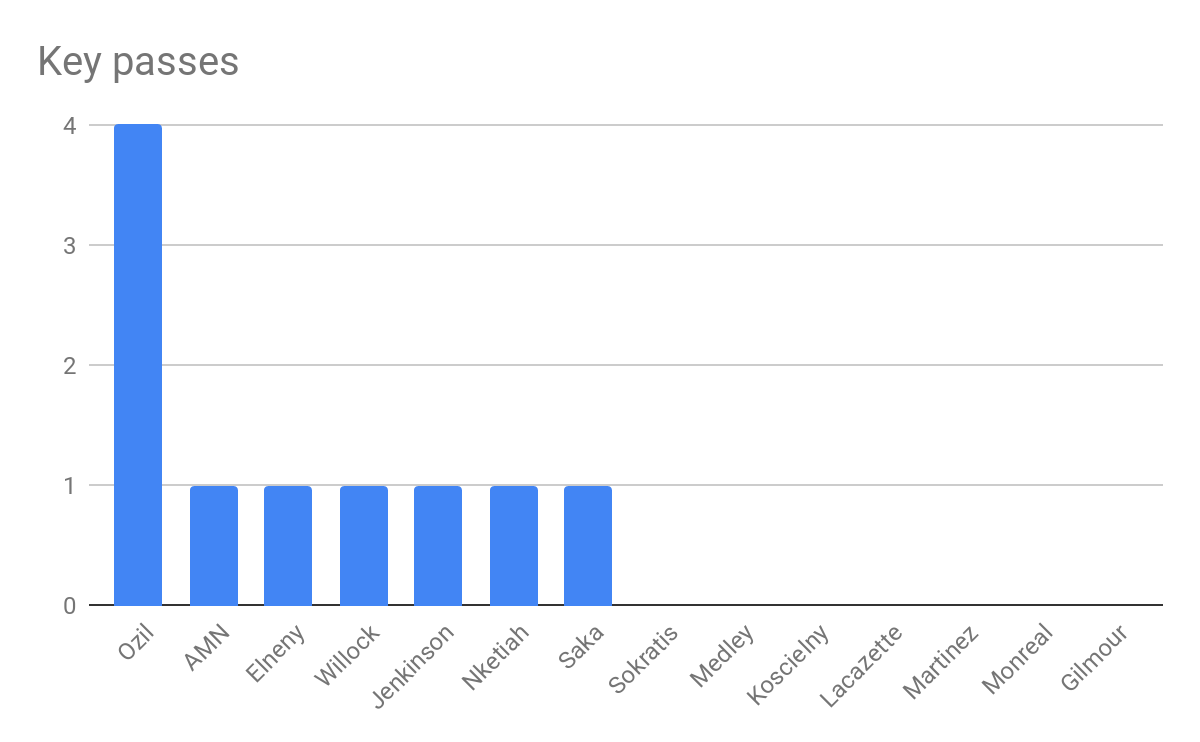 Naturally, Ozil led the way in key passes. Though as an aside only one player created a big chance, Nketiah for Saka.

Saka so far isn’t showing up much in these charts, until we look at dribbles: 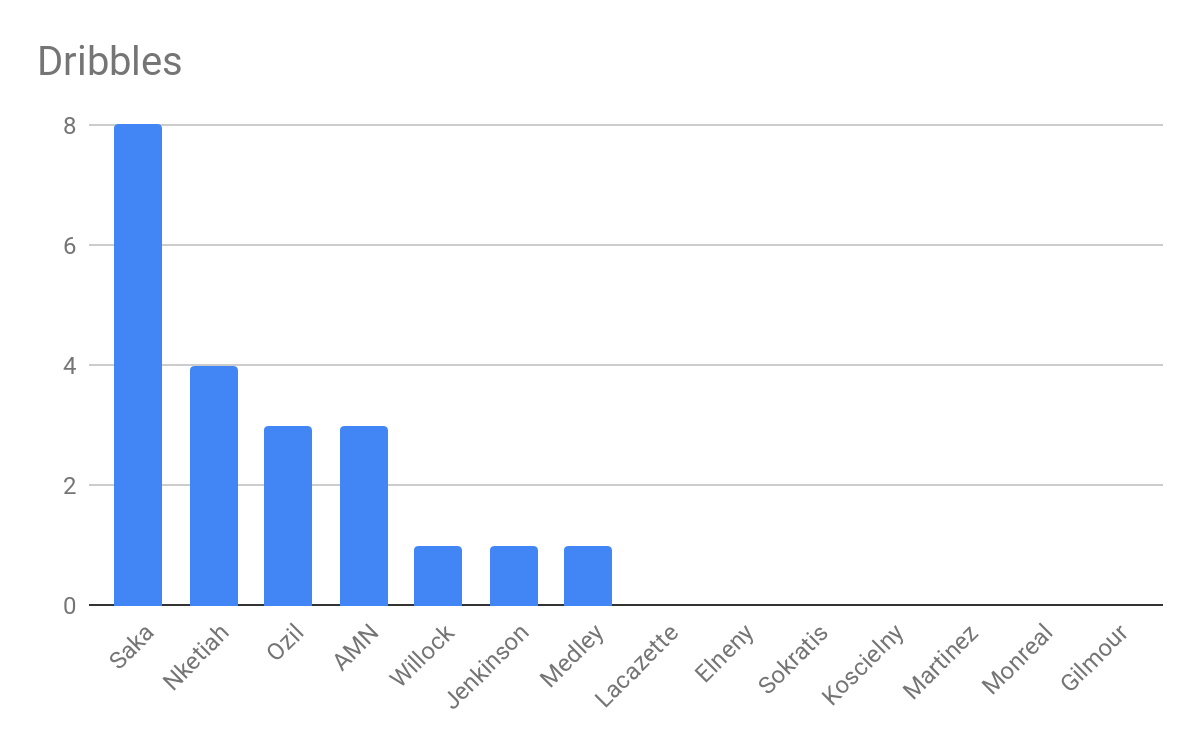 He had 8 dribbles last night (of 11) and all were in and around the 18 yard box. Another interesting thing we can see is that other than Ozil and Jenkinson the young players went out last night with some fire in their bellies! They were certainly looking to take on their opponents. Though Willock may want to rethink that approach a bit as he had one of the worst dribbling nights, completing just one of four attempts. 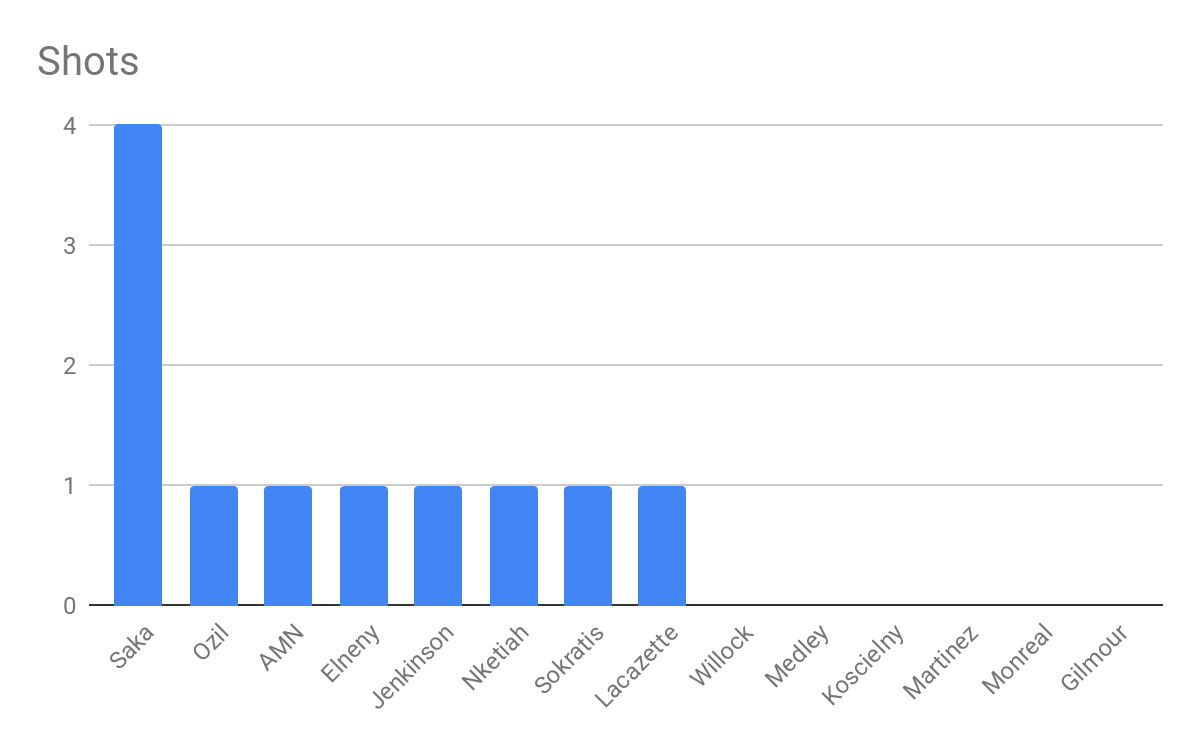 With shots, again we see Saka leading the way as with shots on goal where it was only Saka and Laca who got a shot on goal in this match. Saka had 3, Laca the 1. Saka also led all players with big chances, 1.

Moving back on the pitch a bit, to defense, 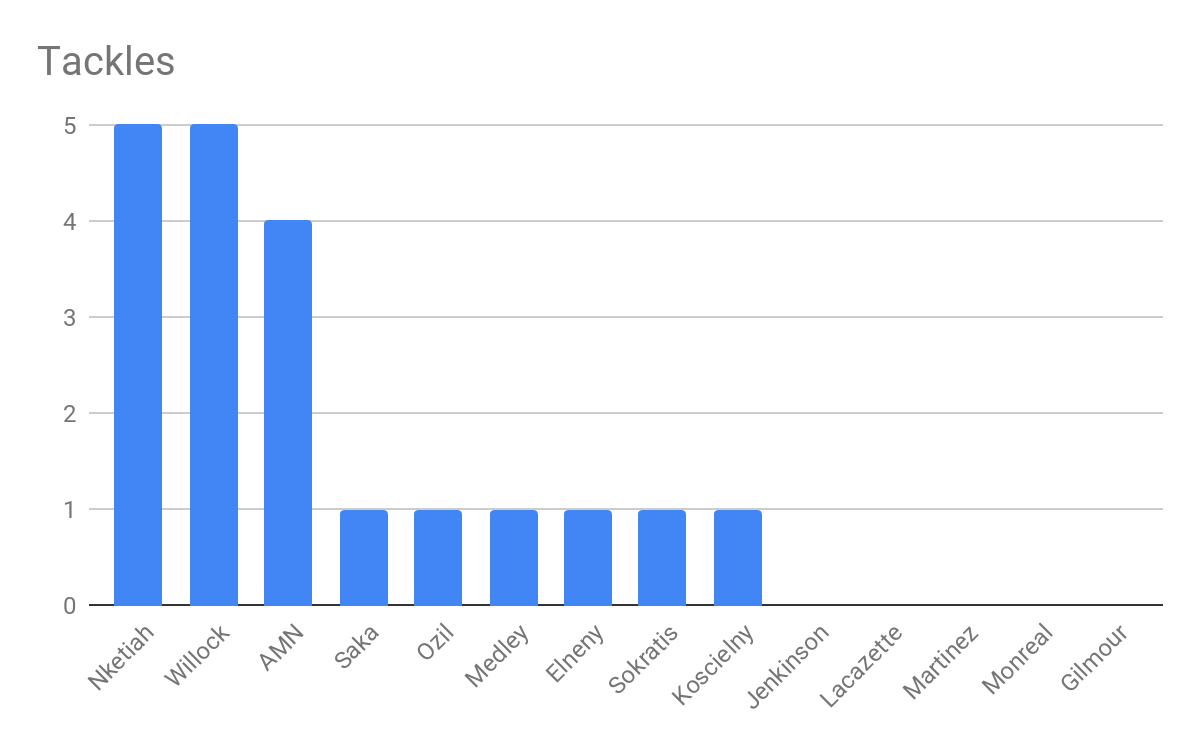 Again, the young players really led the way here. Nketiah was a surprise, going 5/5 in tackles. 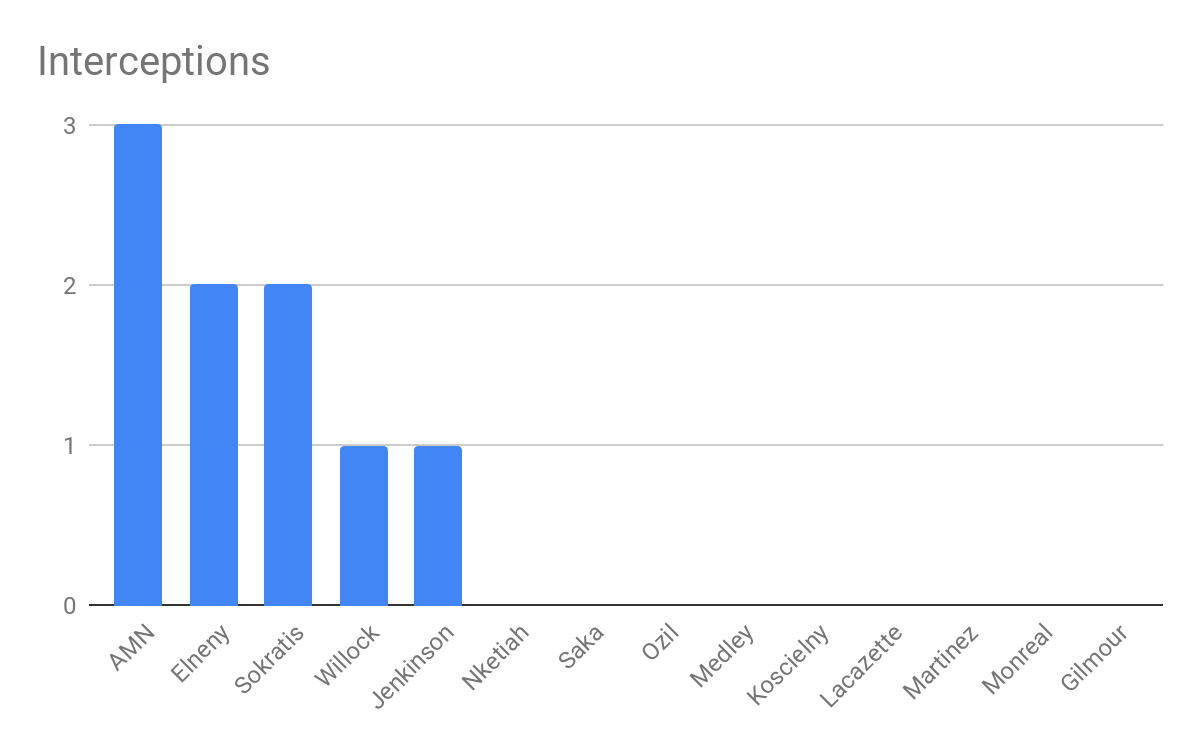 Maitland-Niles was pretty good defensively all around, picking off the ball, reading the game well, and tackling. This defensive work in midfield and the control by Elneny when Arsenal were in possession, locked Qarabag down. They only had 1 shot in this match.

Ok, so, maybe this isn’t groundbreaking stuff. But hopefully it was at least somewhat interesting!

Based on this visualization who would you pick for man of the match? Me? I have Saka.

Source: StatsZone App loaded into a google spreadsheet, like I said, I’m not doing anything super cool here.